Two students have been admitted into quarantine at Faleolo Hospital since their arrival on Friday night. (Photo: Xiong Qi/Xinhua via Associated Press)

Two students are the latest Samoans to be quarantined at the Faleolo Hospital quarantine site for infectious disease, as concerns about the spread of the coronavirus continue to grow.

The students' quarantining should not be taken as an indication that they are infected with the virus, authorities say.

The head of the Government Press Secretariat, Nanai Laveitiga Tuiletufuga, said the two Samoan scholars flew in from China.

He was not aware of where in China they are based.

Nanai said that, according to Tagaloa Dr. Robert Thomsen, the students did not display any physical symptoms of the virus but protocol instigated by Cabinet to ensure containment of the disease must always be followed.

"The 14 days of quarantine has to be applied, especially for those who flew in straight from China and were there for a long time," he said.

New mandatory border control policies require incoming passengers to Samoa to spend at least 14 days in a country free of the virus and medical clearance three days prior to their travel.

The two students brings the number of those under quarantine in Samoa currently to four.

Two are sailors remain in isolation after they were transferred to the Faleolo District Hospital upon arrival in the country last Sunday.

The sailors had spent two days in China on transit to Samoa through Nadi on flight FJ254 along with six Chinese passengers who were deported back to Fiji.

Laveitiga said the two sailors are "doing very well" and are still not showing any symptoms of the coronavirus. But the complete 14 days of quarantine is compulsory, he reiterated.

And as far as he knows, visitation by family members is prohibited.

Laveitiga also confirmed that there have been 11 individuals denied entry into Samoa under the new border control measures, since they were approved by Cabinet two weeks ago.

Most of those denied entry and deported have been Chinese nationals, officials have confirmed.

"The Samoan Government do not want to take any risks. Better safe than sorry," Laveitiga said.

This includes an American couple stopped from entering Samoa on Tuesday from Pago Pago.

Laveitiga said it was because they came in from the U.S., and the U.S. is one of the countries on the list with confirmed cases of coronavirus.

"The directive from Cabinet is that if you are travelling from a country with confirmed cases, the requirement is to self quarantine in a country free of the virus for 14 days," he said.

If not, you will be denied entry.

Medical clearances are only valid if a document provided was issued within three days of a passenger's arrival.

The Government issued the following statement on Sunday night:

"Two Samoan students returning from Mainland China are isolated under self-quarantine for 14 days at the Faleolo Health Clinic as a precautionary measure. The students arrived last night transiting through Nadi Fiji.
After health screening at the airport, the students had no physical or visible symptoms associated to the Coronavirus, says Director of Public Health and Assistant Chief Executive with the Ministry of Health Tagaloa Dr. Robert Thomsen. However, the 14-day self-quarantine is compulsory for all returning Samoan citizens who have transited or stayed in China.

Meanwhile Government via the Ministry of Foreign Affairs and Trade is closely monitoring the virus developments in China with the safety of the rest of Samoan scholarship students and Samoa citizens in the Republic a priority.

Back at Faleolo, the two students join two Samoan sailors who have been detained and quarantined at Faleolo since Monday this week. “The sailors also have not developed any symptoms associated to the virus since they were incubated,” says Tagaloa reiterating the quarantine mandate is enforced without exemptions.

And the 14 compulsory self-quarantine in a country without the virus applies only to China, explained the Public Health Director. “Nationals from other countries only require medical clearance within 3 days before arrival to Samoa.”

Furthermore U.S. citizens from California, Washington, Arizona, and Illinois States where there are confirmed cases of the virus must obey the 14-day self-quarantine mandate other no entry to Samoa. The same applies to all travelers from countries with confirmed virus cases.

However, Tagaloa says that the rest of US citizens are only required to medical clearance within 3 days before arrival to Samoa.”
(See Updated Travel Advisory from the Ministry of Health.)

Samoa is not alone in imposing heavy restrictions. In the wake of the World Health Organization declaring the coronavirus to be a Public Health Emergency of International Concern, both the Federated States of Micronesia and the Marshall Islands issued expanded travel bans on Friday.

FSM has issued a public health emergency declaration that bans travel by Micronesian citizens to China "and other countries with confirmed cases of coronavirus until further notice and until such time that a determination is made that the coronavirus is effectively contained".

The Marshall Islands, which on 24 January was one of the first countries in the central Pacific to issue a travel advisory banning direct travel from China, expanded the travel ban to include Macau and Hong Kong.

The Kiribati government has placed all visa applications from China on hold in an effort to stave off the coronavirus.
Kiribati is the latest Pacific country to impose entry requirements to stop the spread off the virus.

All visitors are now required to fill out a health form and travelers from countries with the coronavirus must go through a self-quarantine period.

Papua New Guinea this week announced it would ban travelers from "Asian countries", with PNG health officials conceding that it would struggle to cope if there was a local outbreak of the coronavirus.

It also said citizens and residents returning from "Asian countries" would be quarantined for two weeks, and the land border with Indonesia would also be closed.
The Marshall Islands have sealed their borders as authorities are in their sixth month of battling a dengue fever epidemic that continues to worsen.

In Palau, the government said it would suspend charter flights from China, Macau and Hong Kong at least until the end of February, and government workers were also restricted from travelling.

Vanuatu was considering similar measures, while the Cook Islands Cabinet was weighing up whether to turn back travelers who had been in China.

All inbound travelers to Tonga are now required to fill out a health check form, and Fiji had stepped up airport monitoring. 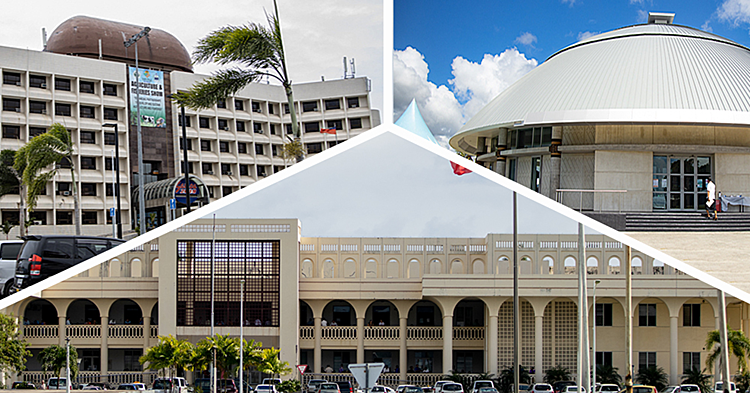 With Parliament moving to pass three bills which threaten to restructure the judiciary to recognise village rights above all else, a Constitutional law expert has suggested that Government might investigate whether it wants to do away with the entire British system altogether.