Oceania University of Medicine welcomes addition to its local operations

A long-planed addition to the Oceania University School of Medicine is now ready for use. (Photo: Vaitogi Asuisui Matafeo)

A long-planed addition to the local operations of the Oceania University of Medicine (O.U.M.) was officially opened at Tupua Tamasese Motootua Hospital on Monday.

“O.U.M students have been on this campus since the University was founded in 2002 but they have not for some very strange reason been given the opportunity to start using this building until this day hence the reason for this occasion this morning,” he said.

By partnering with a hospital, the university will be able to offer medical education and health research that improved patient care and the development of both doctors and students. 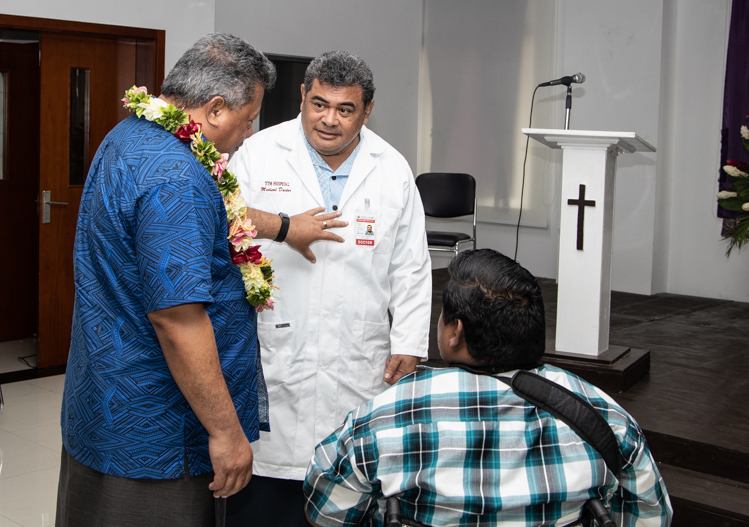 The new facilities comprise the third floor of a Ministry of Health building, which will be used by O.U.M. for its local operations, the office of its Vice Chancellor, student administration and a study and research room for students.

Funding was provided by the People's Republic of China.

“Madam Taffy first came to see me 19 years ago to discuss the opening of a medical school in Samoa," he said.

"She told me that she would be using internet technology in teaching a medical curriculum online and this could be the only way a medical school could be successfully set up in Samoa in a geographically dispersed imp that we experience in the Pacific.”

Today O.U.M has 240 students primarily from Samoa, Australia, Canada, New Zealand and the United States who will come to Samoa to undertake their clinical programmes.

In 2002, the university began operations with the aim of addressing the shortage of doctors in the Pacific. More than 100 have graduated since.

This year alone, students will contribute an estimated $600,000 tala to the Samoan economy.

The O.U.M has produced seven Samoan doctors who are currently serving Samoa and an additional seven who will work locally upon their graduation in return for scholarships from O.U.M..

This year, O.U.M. is offering up to four scholarships to qualifying Samoan students with the goal of providing the nation with the healthcare it deserved, the Prime Minister said.

Ms. Gould in her speech said she was honoured and excited to see a proposal from a decade ago reach fruition.

“I want to particularly thank the Honorable Prime Minister for making this happen and I also want to acknowledge and thank all the Samoan doctors who are providing the supervision for our students and making their time here such an extraordinary, exciting and a worthwhile experience,” she said.

“I would just like to say how honoured and excited we are, [for] the O.U.M. to be here to have our offices and our electoral rooms and right here at T.T.M. ward, all the important things are happening for development school.

"Most of all, I want to emphasise that it was the vision of the Honorable Prime Minister that made the O.U.M. happen.”

For this, she proudly announced the continuation of scholarships to Samoan students.

The first Samoan student to graduate from the University was Dr. Tapa Fidow at a time when his university cohort comprised only ten students, with him the only local.

“We initially give back praises to the man above that we’ve accomplished one of the governments’ long time plans for our hospital. We needed the facilities as we now do our own training for doctors but we didn’t have the facility to do it so that’s why it was possible for China to accept a request to build this expensive building,” Dr. Fidow said.

“The Director General and the staff provided excellent provisions to ensure that the studies need the safety and health standards of our country.”

“We faced a lot of challenges in our University but we depended on God and there was no greater power back then but working hard,” he said.

At the time of Dr. Fidow's studies final exams were held in Melbourne, Australia with external examiners from Australia's Medical Council and the National University of Samoa in attendance to ensure students' accreditation to work in Australia, New Zealand, America and more.

After the conclusion of his studies, Dr. Fidow was attached for three months to the main hospital in Auckland before he came back to Samoa in 2007 for his graduation and started working to serve a four-year bond.

Afterwards he went back for his specialist training of Diploma in Fiji for one year in 2012, then came back and again secured another scholarship for masters in the same University in Fiji, spending three years there until 2017.

“Since then I finally graduated again for the final time and here I am serving our country. I was also blessed with other awards as a senior doctor, also [an] Associate Fellowship [from the] Royal Australian New Zealand College in Australia and New Zealand,” he said.

Doctors will also be abiding by a new dress code.

“Now we’re strict on our dress code and especially for us to identify that if our clothes are being infected with diseases so we can protect our families as well from them by taking them off immediately,” Dr. Fidow added.

Two separate Police raids on Tuesday night landed two men in custody, after drugs and ammunition were alleged to have been discovered in separate raids.