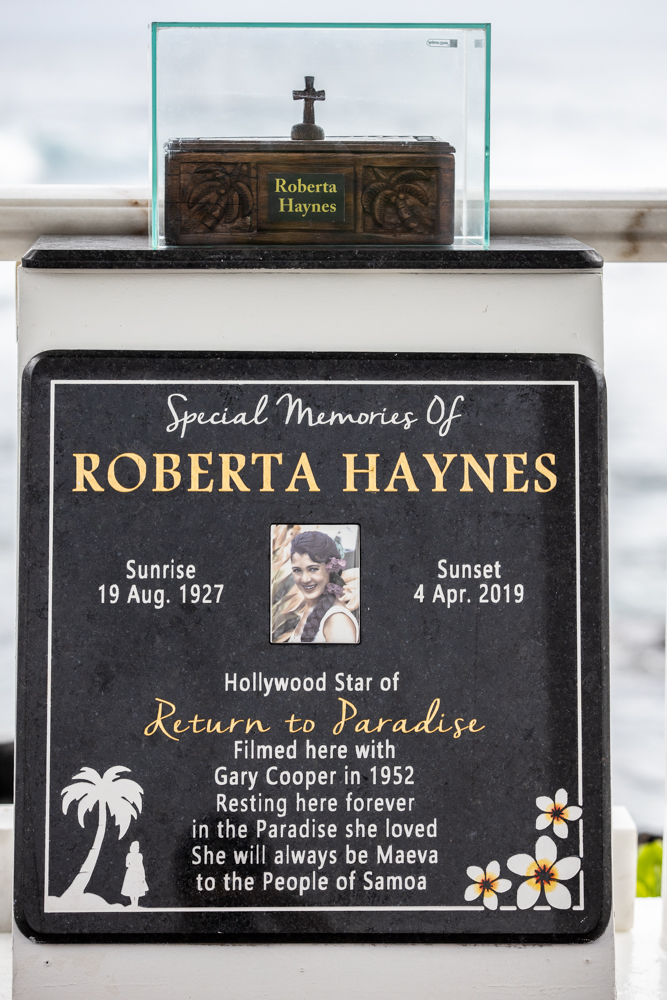 Roberta Haynes was finally laid to rest on the shores of Return to Paradise beach under the grey skies of Lefaga on Tuesday afternoon, before family, friends and fans.

The Return to Paradise star, who acted opposite Gary Cooper in the 1953 classic, told her family she wanted to come home to Samoa to be interred after her death when she became too weak to travel in her last year before her passing on the 4th of April.

So on Tuesday, the seaside chapel of the resort was decorated and packed to the rafters to bid her farewell, and welcome home. 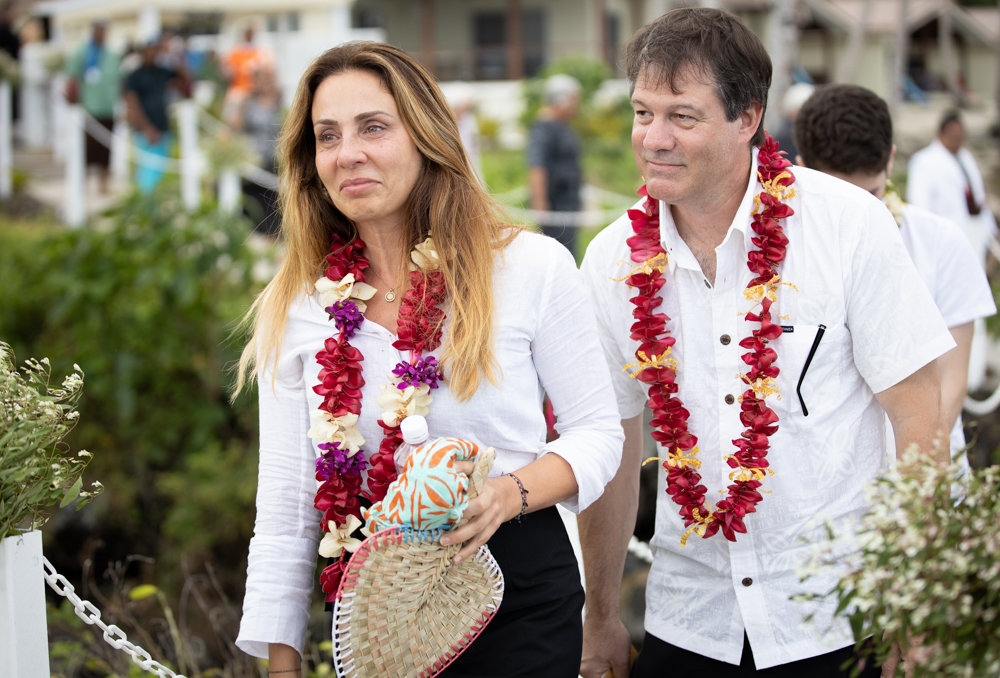 The 91-year-old actress and writer died peacefully in her home, not 30 minutes after the last guest had left her farewell party, her son Jonathan Ward told the chapel guests.

Mr. Ward, his wife Patricia and their children made the journey with Ms Haynes’ ashes from Florida to Samoa.

“My mom’s life is best shared in a play in four parts,” he said, before beginning with her early life and sharing her story with the guests.

He detailed her colourful journey from being an aspiring biologist to ending up on the silver screen, her marriages and trysts with Hollywood stars. In one story he retold, Ms Haynes spent an evening with her film producer and Frank Sinatra, who put on his own record when they went to his home for a nightcap.

But his most loving tribute came in “act three,” when he came into his mother’s life.

“My mom not only managed to become a writer, producer, a studio executive at a time where women were expected to play the role of secretary, but she raised me as a single parent.

“She showed me the world travelling from place to place; she invested in my education, even when it meant sacrifice for her; she taught me about family, even though ours was quite small; she taught me about independence and independent thought; how to make friends and forge deep relationships,” Mr Ward shared. 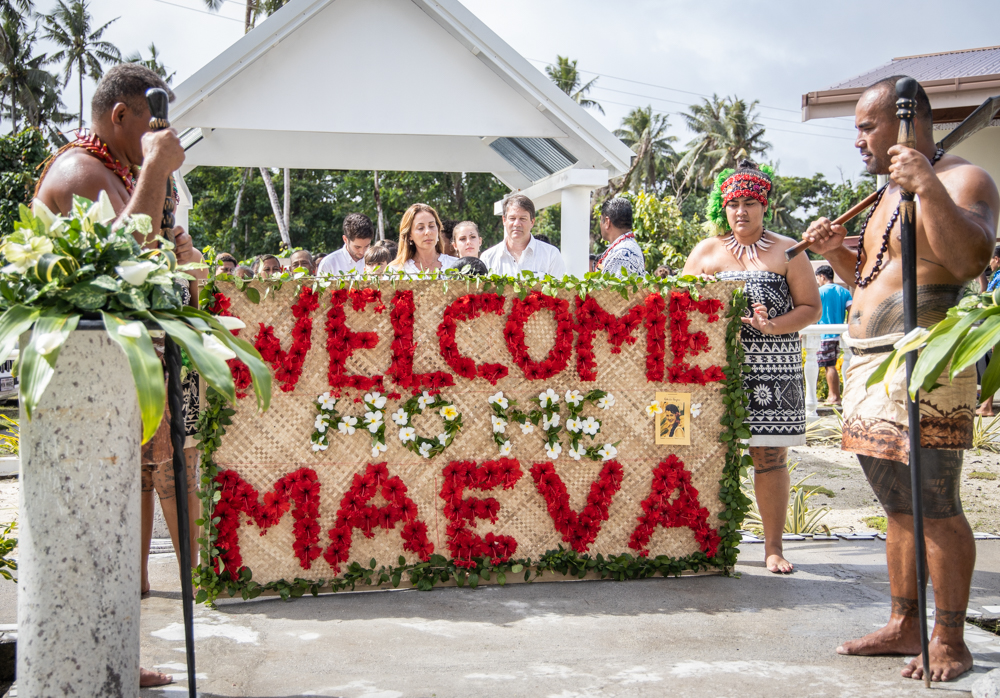 The ceremony itself opened with the Return to Paradise staff escorting the family to the chapel, with a fine mat decorated in fresh hibiscus and frangipani spelling out ‘Welcome Home Maeva,’ the name of Ms Haynes’ character in Return to Paradise.

“It is really special she would want to come back to Samoa,” Afamasaga said of Ms Haynes. Her own father worked on the film in various roles, earning enough money to move the family to New Zealand.

“We know for us, there would be no resort [without the film].

“We have so much to be thankful to your mother for,” she said to the Ward family. 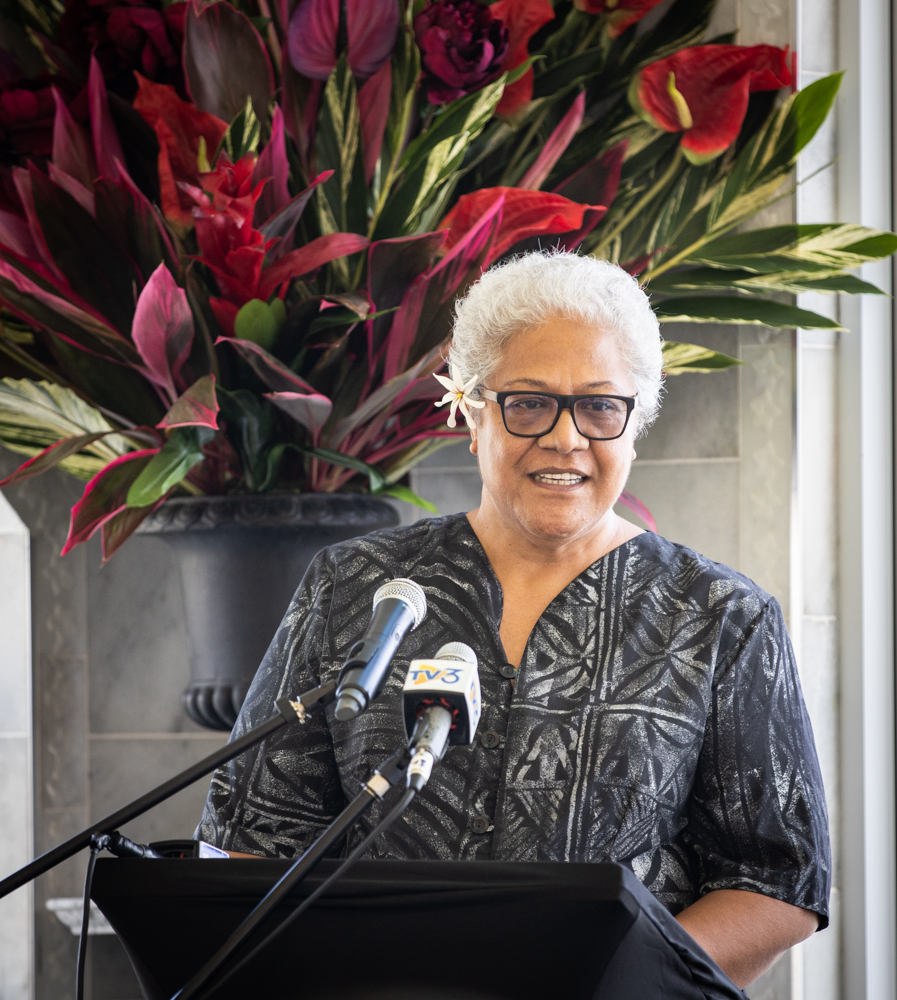 Deputy Prime Minister Fiame Naomi Mata’afa stood to speak, not only as a “Lefaga girl” herself, but also as the granddaughter of Le Mamea Matatumua, who played Chief Tonga in the film.

“One of my memories of my mother was the shock and horror of her father actually participating in a Hollywood movie, of those people who we all thought at that time were of very loose morals,” Fiame shared to laughter.

She offered the Government's condolences and her wishes for the families comfort as they carried out Ms Haynes last wishes, to be returned to Paradise.

The character of Maeva reflected for Fiame the life of a woman constrained by her social world but tries to live her own life regardless, to leave behind a legacy.

Fiame shared how she watched the classic one Friday night in her Victoria University days, instead of going to the pub.

“In those days in New Zealand the pubs closed at 10 o’clock at night.

“My flatmates came back and found me watching this movie,” she said. They promptly changed the channel, where Fiame changed it back, and had to “confess” she was watching the film because it was filmed in Samoa, and her grandfather was in it.

She also acknowledged how the film boosted Samoa into the world’s stage and contributed to its tourism industry.

“We are all very happy Roberta has returned. May the skies clear for Roberta’s last day, and may her soul rest in eternal peace,” she said.

Terence Dunleavy, who played ‘Mac’ the airman in the film, gave a tribute, followed by Ms Haynes’ lifelong friends Su’a Frieda Paul and Papalii Dr Viopapa Atherton, who shared loving memories of their time in Samoa together. 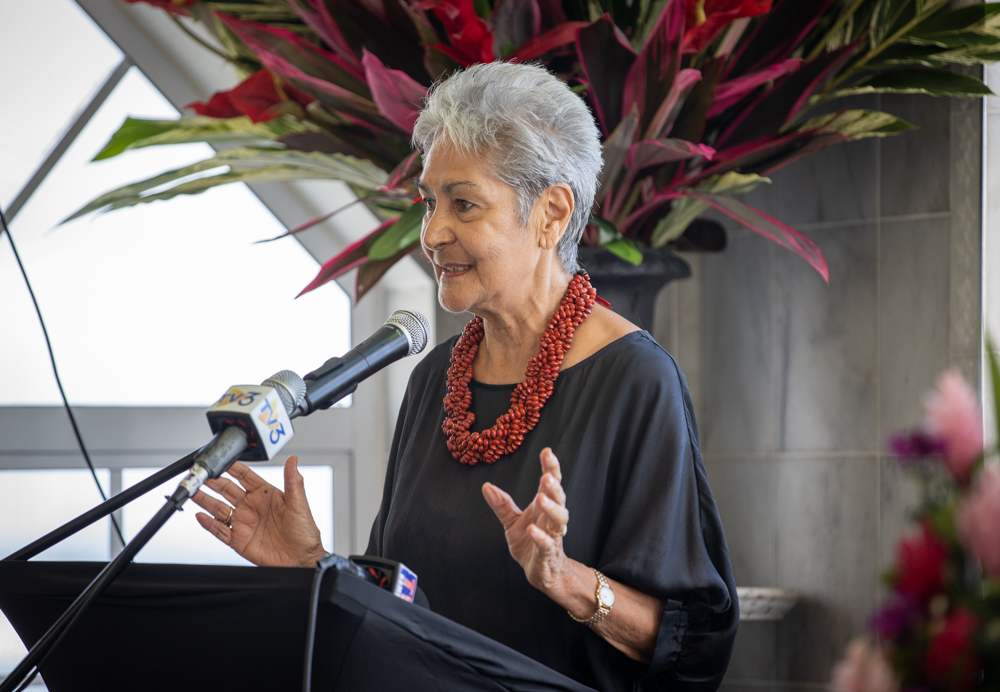 Her granddaughter Gemma Ward, and son Mr Ward also spoke about their beloved mother, who closed his tribute with a prayer ‘For the Family’ by Robert Louis Stevenson, about whom Ms Haynes was writing a documentary when she died.

“So order events, so strengthen our frailty, as that day by day we shall come before Thee with this song of gratitude, and in the end we be dismissed with honour,” Mr Ward read.

Mr Ward and his family will stay in Samoa another week at Return to Paradise.

Mr Dunleavy wrote the song in 1954, and delivered it personally to His Highness the former Head Of State Tui Atua Tupua Tamasese Efi in 1999.

And in honour of Ms Haynes’ return home, Galumalemana wrote a Samoan verse, telling the story of her longing to come back, of Samoa whispering in her ear, and of her undying love of the island. 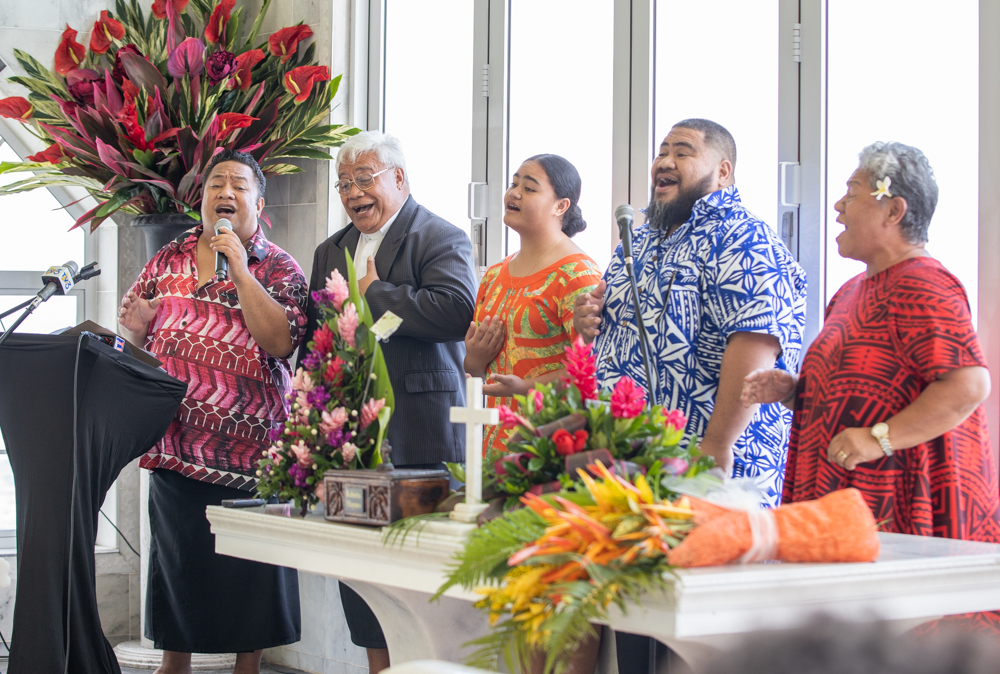 The Punialava’a family sang a rousing rendition of He Touched Me, originally performed by Bill & Gloria Gaither in 1990.

Reverend Lale Peteru and Reverend Nu’u gave the religious addresses and prayers of the service.

Her husband, Burton Shipley is the president of Oceania branch of the International Basketball Federation (F.I.B.A) and the pair spent the last two weeks at the Pacific Games basketball tournaments. 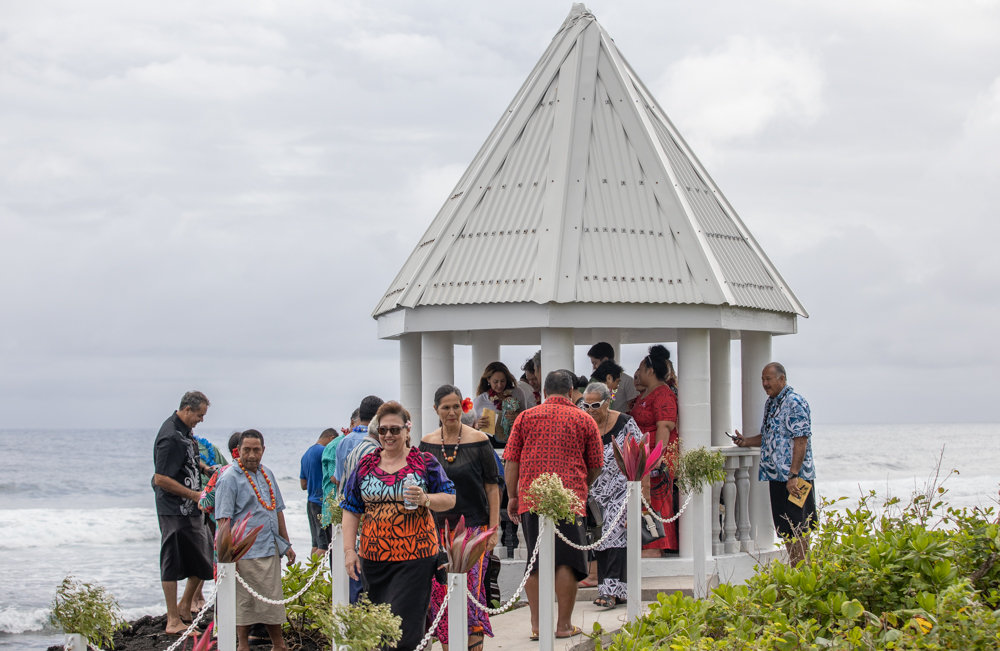 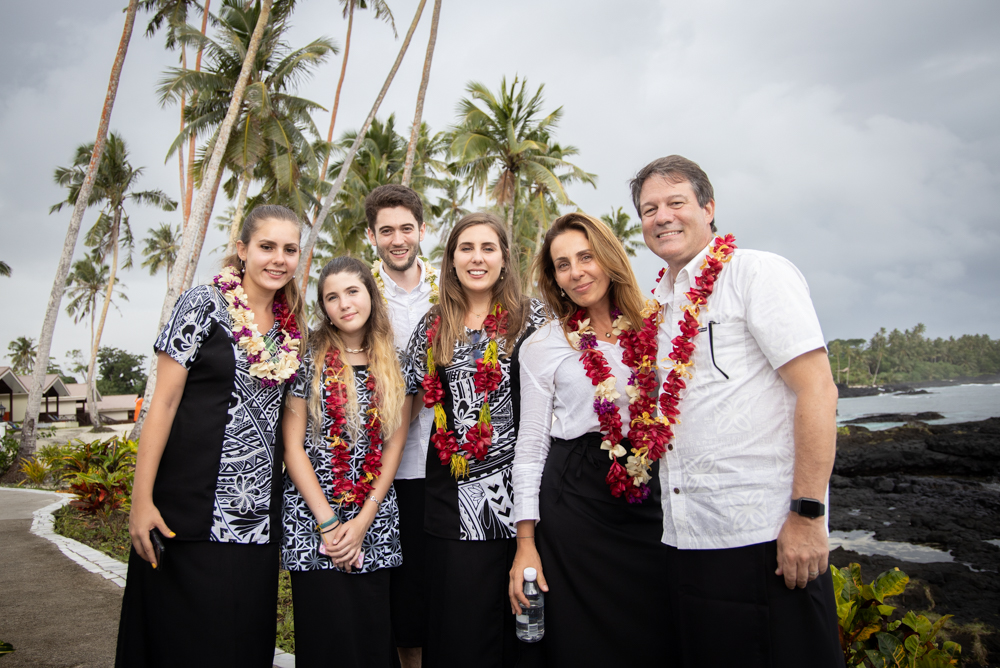