Samoa
President Nelson gives the Head of State His Highness Tuimalealiifano Vaaletoa Sualauvi II a gift of a statue of Jesus Christ during his courtesy visit on Saturday afternoon. (Photo: Vaitogi Asuisui Matafeo)

The Head of State, His Highness Tuimalealiifano Vaaletoa Sualauvi II, and his wife Faamausili Maposua Leinafo, welcomed President Russell M. Nelson, 17th and current president of Church of Jesus Christ of the Latter Day Saints to their home on Saturday afternoon.

President Nelson is in Samoa as part of his Pacific tour, visiting not only Samoa but also Australia, Fiji, Tahiti, Tonga and New Zealand.

He landed at Faleolo Airport in the afternoon, and was greeted by hundreds of excited onlookers on his journey from the airport to the Head of State’s residence, where Tuimalealiifano awaited him and his delegation.

Asked through the window of his car if he enjoyed seeing his congregants waiting for him on the roadside, President Nelson said: “We were thrilled to see them all.” 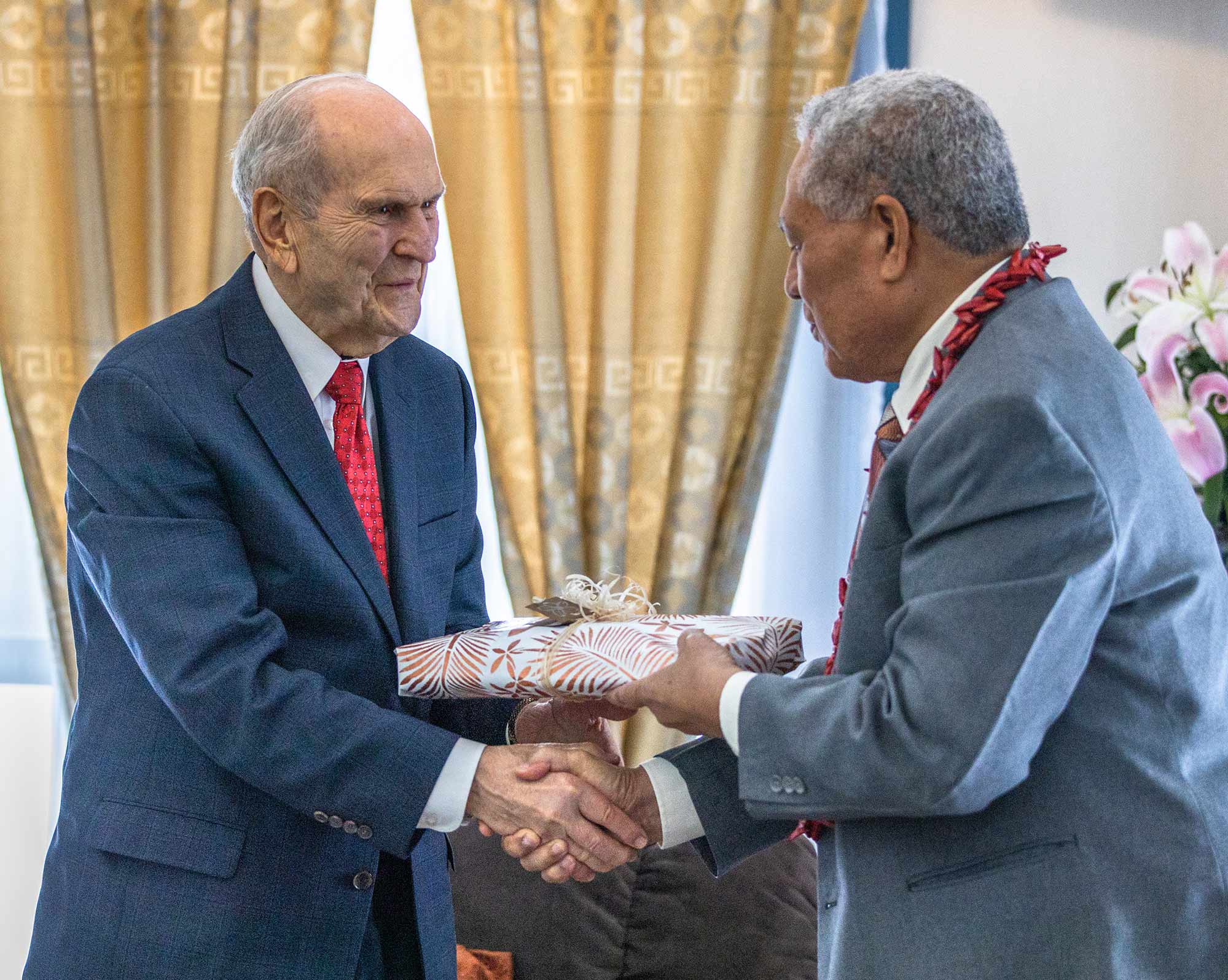 Laulii First Ward, Nuumau Stake was out in high spirits from about 1:30 in the afternoon, dressed in fine white and ready to greet their President.

Jacob Nansen said they were excited to say hello, and even goodbye to President Nelson as he makes his first trip to Samoa.

“We are so excited we all look forward to this,” Mr Nansen said.

“We’re just waving, that’s enough for us! Then we will go to Pesega for the devotional tonight.”

Alongside the President to greet Tuimalealiifano was Elder Gerrit Gong, who is a member of the Quorum of the Twelve Apostles and his wife Sister Susan Gong, Elder Vincent Haleck, a General Authority Seventy with his wife Peggy Ann Haleck, Elder Meliula Fata, the Pacific Area President and his successor, Elder Sapele Faalogo and their wives. 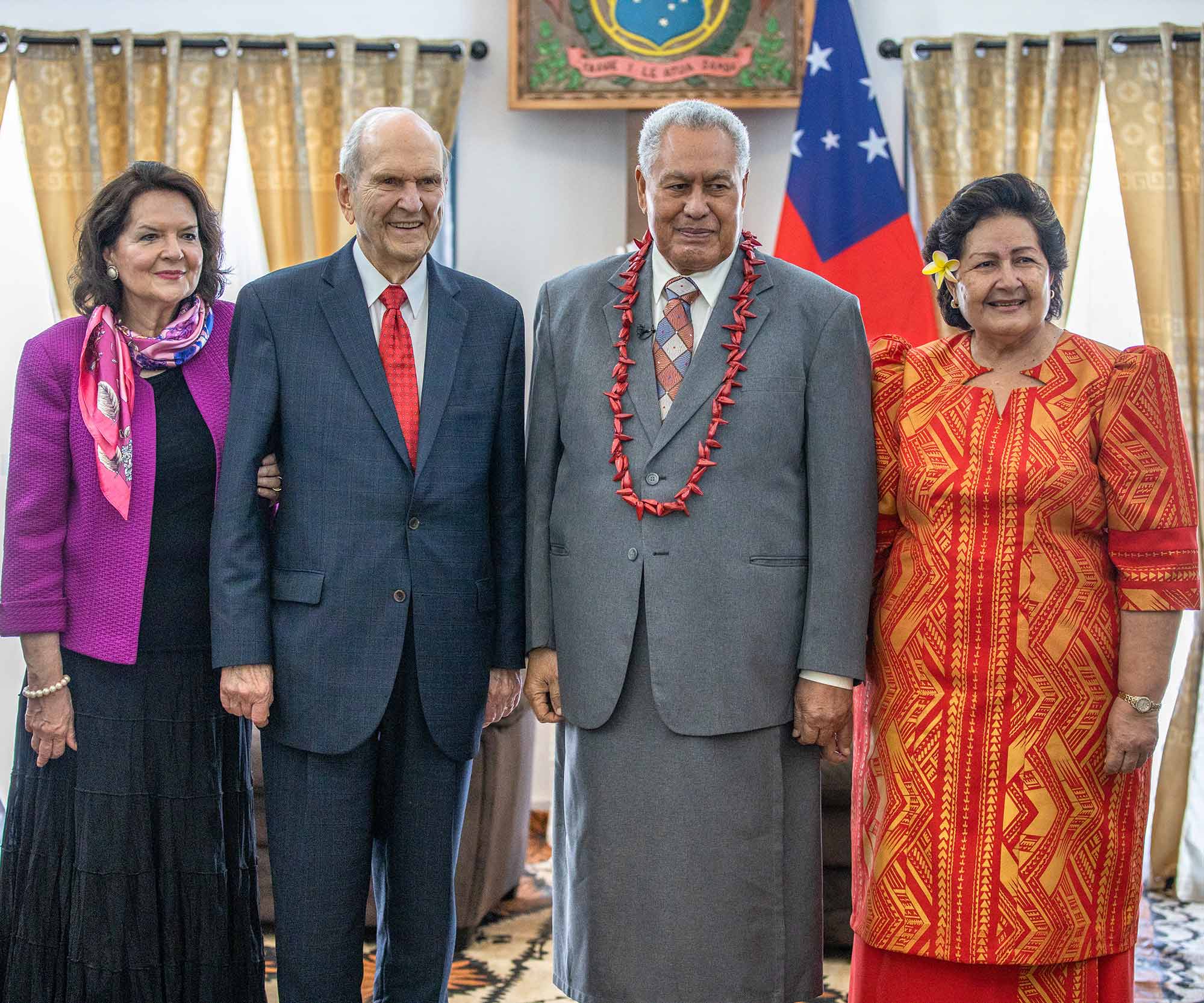 They spent time discussing matters of interest shared by the Church and Samoa, like the state of education and healthcare in the country, the lack of doctors in Samoan hospitals, and the new temple yet to be built in American Samoa.

President Nelson is also being joined on his Pacific tour by Utah news organisations, Church of the Latter Day Saints owned Deseret News from Salt Lake City in Utah, which is the oldest continuously published daily newspaper in Utah, and KSL-TV, the flagship television property of Bonneville International, the for-profit broadcasting arm of the church. 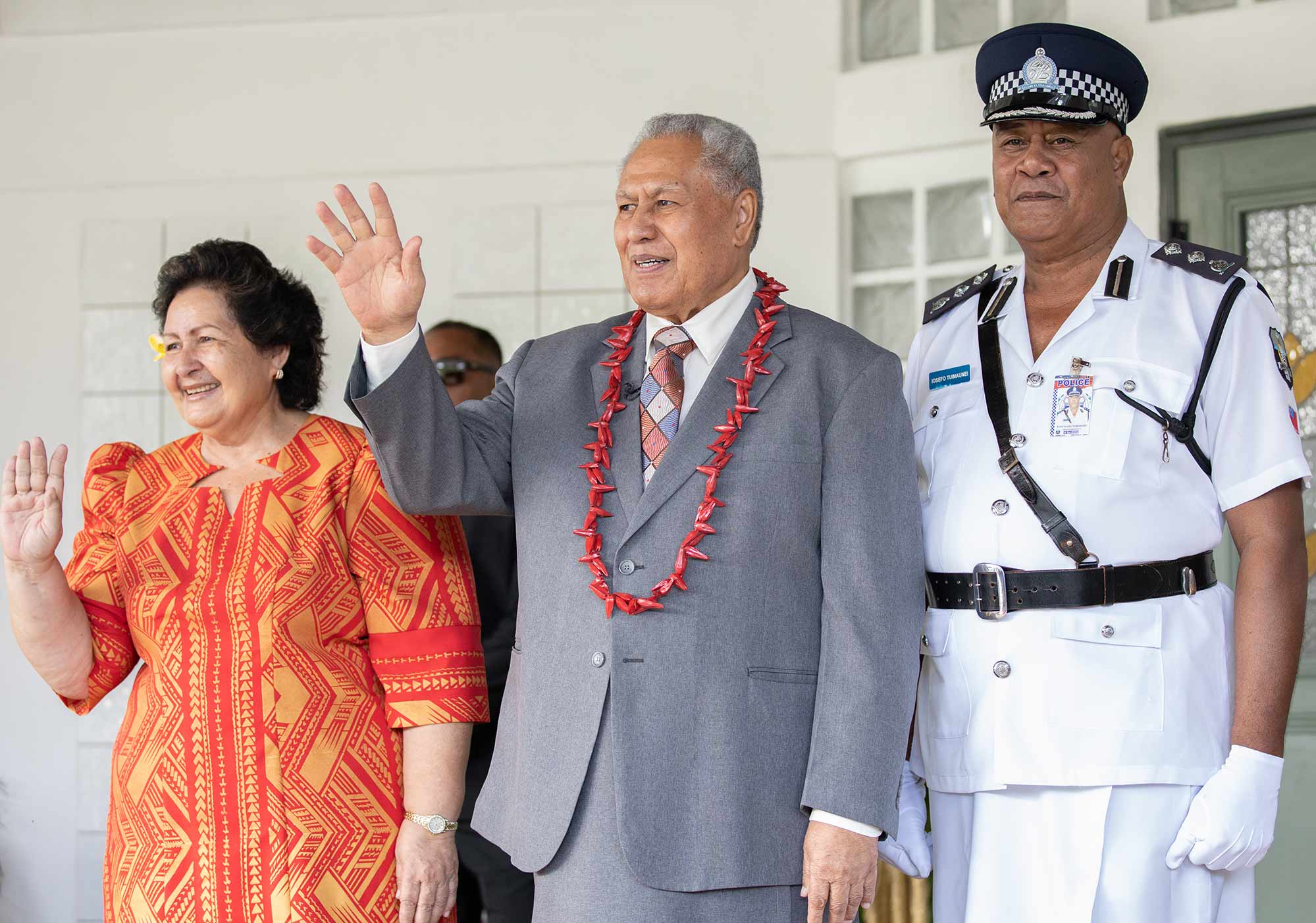