‘No pain, no gain’ is a popular saying among fitness junkies but a brave group of CrossFitters from the popular CrossFit Fatu Toa gym has taken things to a whole new level.

With the inaugural The Toa games yesterday at the Fatu Toa Gym located on Mosooi Street, Vaitele; there was not one dry shirt to be seen.

Members pushed themselves to the limit as they competed in challenges including clean and jerk, box jumps, goblet squats, deadlifts, wall balls, burbies over the bar and a nice 3 mile run in the burning heat.

But what exactly is Crossfit?

“Crossfit is defined as a constantly varied functional movement performed at high intensity,” explained Dean Sefo, who runs the gym with his brother, Brandon and cousin Xavier Martel.

“So basically we do movements that the body was designed to do; functional movements such a squatting, Olympic weightlifting, gymnastics, Plyometrics running; we work on things that will help you outside the gym.

“Not only will crossfit make you fit, but it will help you with your day to day life to stay active and healthy; it really is a fitness programme that anyone can do so.

“We can even do a lot of scaling down depending on the individual athletes.”

According to Mr. Sefo, the aim of the competition was to give members of his gym a competitive edge.

“This is our first functional fitness competition and we’re the only crossfit affiliated with Samoa,” he said. “We wanted to create a competition for our members to give them a competitive outlet because crossfit as a sport is really growing worldwide.

“We have the crossfit games every year and it really is a sport of fitness so we just wanted to give our members a taste of that and to show people that crossfit is something that you can pursue as a sport and not just a form of training.”

And with everyone pushing themselves to breaking point, Mr. Sefo was impressed.

“I was really happy with what I saw today,” he said. “The enthusiasm from all our members; some of them who haven’t been crossfitting for very long but they performed outstandingly.

“A lot of people set new personal records for themselves; I loved the energy and all the enthusiasm; I’m just really proud of everyone.”

Another goal Mr. Sefo had with the competition was to promote crossfit as a sport and a lifestyle.

“This competition really is to just promote crossfit as a sport and to get our members excited about competing; it is a competition but it’s more on the friendly side of things,” he said.

“We don’t want it to be too serious so that everyone can just have fun; I know it’s our first one but hopefully it is the first of many so we are looking it hosting another one closer to Christmas.

“Down the line we want to have competitors come in from overseas; we do live in a paradise and a lot of crossfitters travel and they want to visit overseas countries so we want to use crossfit to bring them in.

“They can come have a holiday here and then have a competition to compete in and really just have a good time.”

At the end of the day, the competition was a complete success.

“I’m really happy with how our first competition went,” Mr. Sefo said. “We are looking forward to making this a regular thing with a lot more competitions and hopefully we will be able to grow the sport in Samoa not only as a lifestyle but as a sport.

“Samoans are naturally gifted athletically and I think that crossfit is something that they’ll take quite well to; a lot of Samoans who take it up learn very quickly; it’s a sport that we can really excel in.

“I want to mention those who helped make this all possible; Eveni Sport, Industrial Athletics, CocoSina and also Famer Joe’s.”

As for the seven teams, there could only be one winner but everyone who took part had every reason to feel that they won. 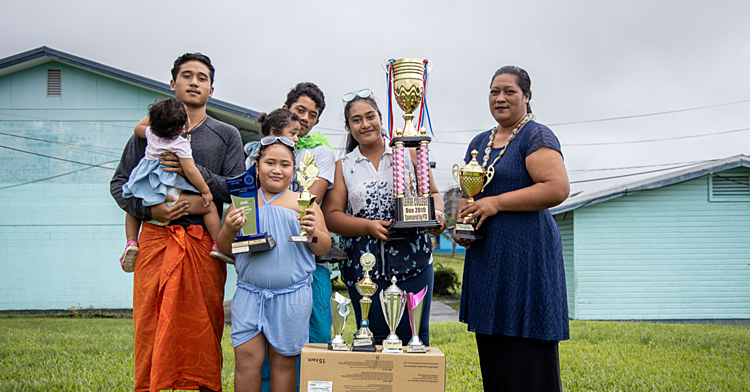