Man gets life sentence for killing his friend

That one moment of madness, fuelled by alcohol, will see Iona Lauaniani spend the rest of his life in jail for killing his friend, Maletino Moananu, inside a cookhouse.

The beating, which led to the death, took place while Mr. Moananu’s daughter looked on helplessly.

This is what the Court was told during the trial presided over by Justice Vui Clarence Nelson.

The Court heard that the defendant struck the deceased twice with a piece of timber.

His lawyer, however, argued that it was in self-defense and that the defendant did so without murderous intent.

In his decision, Justice Vui noted that alcohol played a key part in the tragedy. During the hearing, it was revealed that the men were drinking when an argument broke out over who would control the distribution of the vodka drinks.

Within minutes, the beating started. A 9-year-old daughter of the deceased told the Court she saw the defendant pick up a piece of wood and hit her father on the head.

She said the defendant was standing while her father was seated with his eyes closed on a block of wood in the rear left part of the cookhouse.

“She testified to a second blow by the defendant to the deceased’s shoulder, a third blow to the eyes and several subsequent blows she does not know to where.”

“The evidence of her 10-year-old brother does assist her in that he said he heard from the main house a sound of two heavy strikes coming from the direction of the umukuka.”

“He described the strikes as “makuai pa’ō a” causing him to go to the umukuka to investigate. He met the defendant leaving the umu holding a piece of timber. And he confirmed his younger sisters evidence that the timber was the leg of an old bed.”

“And that the defendant left their property carrying a piece of timber. Both children went to the aid of their father whom they found slumped over and unconscious in the rear part of the umukuka.”

“He was bleeding from his wounds and the crime scene photographs show considerable smears of what looks like blood.”

“Efforts by the children and their siblings to aid the deceased came to naught and it is likely the deceased passed away at the scene of the assault before the police arrived and took him to the National Hospital.”

According to Justice Vui, the defendant elected to testify and gave his version of these events.

The defendant said all was going well with their drinking party and the deceased was dispensing their alcohol when suddenly his comments took on a different tone. Not long after the deceased suddenly stood up, grabbed the bed leg and struck out at him.

“The defendant caught the blow, seized the piece of timber and hit the standing deceased.”

“The defendant also delivered a second blow which struck the deceased on the head, broke the timber and caused the deceased to slump down. He then exited the building carrying the broken timber and went to his house.”

“He placed the piece of wood inside a “pupu teuila” in front of his house, had something to eat and then went to sleep.”

The defendant said he had no intent to kill the deceased. He was merely defending himself.

“He was unsure where the first strike landed but was certain the second strike hit the deceased on the head. When demonstrating the swing it was clear the defendant was left handed something he confirmed in his evidence.

“The medical evidence in this case in particular the Pathologists Report indicates that the majority of the deceased’s injuries were to the right side of his head and upper body.

“This is consistent with a swing to the right side, a natural movement for a left handed person.”

The Pathologist said the combination of bleeding into the right side of the brain and subsurface bleeding from these wounds including aspiration of blood into the deceased’s lungs is what caused his death.

“I am accordingly satisfied beyond reasonable doubt that you were responsible for all of the deceased’s injuries.

“Furthermore, given their severity and extensive nature I have little difficulty in concluding that you had the necessary murderous intent.

“If not to kill, then certainly to cause serious bodily injury known to be likely to kill but you were reckless as to whether it did or not.

“The majority of the blows be they two or four or more but most likely two or more were delivered to vulnerable areas of the deceaseds body.

“No one else delivered them only you and they targeted the head and upper body. Furthermore they were inflicted using the leg of a bed described initially by the defendant in his evidence as a piece of “2 x 4 palagi” timber. This is a lethal weapon,” noted Justice Vui.

He ruled the defence of self-defence fails.

“The defendant can and should be found guilty of the murder of his relative and friend Maletino Moananu on 30 September 2017 at Maletino’s umukuka at Tuanai-uta.

“I convict him accordingly of the charge of murder.

“In the circumstances the second charge of armed with a dangerous weapon is superfluous, that is dismissed.

“The law clearly prescribes. There is only one penalty for the crime of murder.

“It is no longer the death penalty in this country but it is life imprisonment. Accordingly you are convicted of the charge of murder Iona and sentenced to life in prison.” 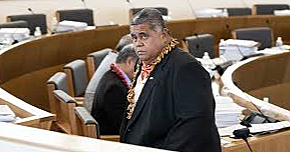