An oath to the people or caretaker government?

Public servants are accountable to the people through the oath of office they swore on the day of their appointment. (Photo: Supplied)

It is bad enough that the refusal by the caretaker Government to follow Supreme Court orders, to allow the XVII Parliament to convene so the business of governing can continue, is prolonging Samoa’s three-month long constitutional crisis.

So revelations in the Tuesday 20 July 2021 edition of the Samoa Observer (Customs boss asked Police to “protect” Govt, delay investigation) of the Ministry of Customs and Revenue C.E.O. Matafeo Avalisa Viali-Fautuali’i asking the Police to delay their investigation into the conduct of one of her Assistant Chief Executive Officers is a cause for concern.

“In addition, our position is premised on the fact that given these uncertain times and with the caretaker government being subject to unnecessary public scrutiny, we as responsible public servants must ensure we protect our government’s overall interest at all times, with independence from favouritism and politics,” her letter reads.

“With great shame and sincerest regrets for the wrongdoing of our ACEO which reflects negligence of myself as the CEO and negative implication on the Ministry (and government) as a public entity, having your Ministry involved at this stage on the presumption of criminal actions, will only add ‘fuel to the fire’ with misinformation to the public by the media.”

For Matafeo to go further and point out the “unnecessary public scrutiny” the caretaker Government is currently getting – and warn how adverse publicity emanating from the Police investigation could “add fuel to the fire” – is way out of line for a bureaucrat who should be politically neutral.

First of all let’s put Matafeo’s 1 July 2021 letter to the Police Commissioner under the microscope and discuss the wider implications of its contents, in terms of the law and public perception of public servants and their conduct.

In Police inquiries into alleged offences maintaining the integrity of its investigation is essential, which is why it should be thorough and exhaustive to avoid any lapses that could tarnish the case, and consequently lead to its dropping and justice not being served.

This explains why the Police Commissioner Fuiavaili'ili Egon Keil wrote to the Ministry’s C.E.O. seeking information in relation to its ongoing investigation into the conduct of the official.

Fuiavaili'ili is empowered by legislation to undertake criminal investigations and shouldn’t be stopped by anyone from pursuing a case, if the Samoa Police Service has reason to believe alleged impropriety could have occurred.

Therefore the 1 July 2021 correspondence by Matafeo to the Police Commissioner – asking that the Police delay its investigation, until after the Public Service Commission (P.S.C.) completed its own inquiry – is totally inappropriate.

The public impression that her letter creates doesn’t augur well for the rule of law in Samoa nor inspire public confidence in institutions of accountability, especially during a crucial time when the Judiciary is working overtime to hold persons as well public and private institutions accountable to the law.

And what about the references in her letter to the “caretaker government being subject to unnecessary public scrutiny” and “we as responsible public servants must ensure we protect our government’s overall interest at all times” from favouritism and politics?

It is worrying that a Government Ministry C.E.O. appears to be suggesting that current public scrutiny of the caretaker Government is “unnecessary”!

But aren’t all governments – irrespective of being caretaker or not – subject to public scrutiny in line with the democratic principles enshrined in Samoa’s Constitution of a government being accountable to the people?

And what exactly is the Ministry C.E.O. saying when she writes that responsible public servants should protect “our government’s overall interest” at all times?

The last time we checked with the Constitution of this independent state, the law states that  it is the “people’s interest” that all governments should be serving, and not the other way around.

And we note the irony in her endorsement of a P.S.C. investigation into the conduct of the Ministry’s A.C.E.O. when her 1 July 2021 letter shows support for the Human Rights Protection Party (H.R.P.P.)-led caretaker Government, despite the P.S.C. issuing a memo in April this year warning all civil servants to remain neutral during the April election.

Public servants in Samoa are accountable to the people through the oath of office they swore on the day of their appointment to uphold the laws of the land.

An American Congresswoman, Margaret Madeline Chase Smith, when discussing public service and public servants once said: “Public service must be more than doing a job efficiently and honestly. It must be a complete dedication to the people and to the nation.” 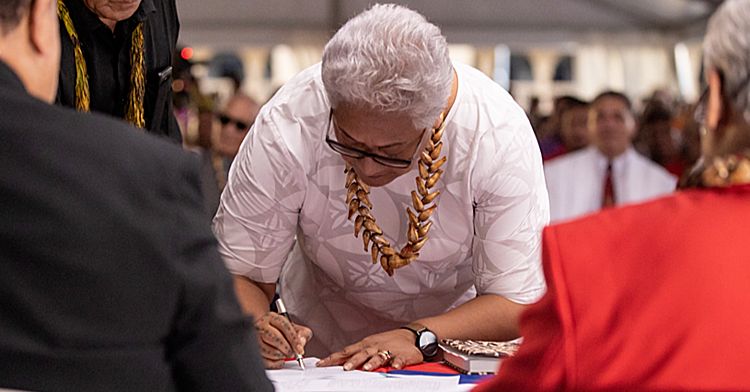