Political impasse remains as next challenges emerge for public service

Editorial
Two months have passed since the country went to the polls to select legislators for the 17th Parliament of Samoa. A complete government makeup is still in limbo. (Photo: Anetone Sagaga)

It was a nice dream, to believe the two Prime Ministers would be able to find some common ground and eke out an agreement or compromise that would provide some political stability for a weary Samoa.

Last week there was a faint glimmer of hope, when word came out that the two leaders had agreed to meet and discuss a way forward.

This week, what faint hope there was, has been snuffed out, with the announcement by both Prime Ministers that they have reached an insurmountable impasse.

The shortest of courtships, played out for the world to see in all its dysfunctional glory.

Prime Minister-elect, Fiame Naomi Mataafa of the Faatuatua i le Atua Samoa ua Tasi (F.A.S.T.) has come out strongly against a continued occupation of government offices by the caretaker Government lead by Tuilaepa Sailele Malielegaoi of the Human Rights Protection Party (H.R.P.P.).

She maintains that F.A.S.T. holds a one-seat majority over incumbents H.R.P.P. and having been sworn-in on May 24, they have completed the steps in forming a new government. A Speaker and Deputy-Speaker of Parliament have been sworn-in, as well as Cabinet positions appointed.

The legality of the swearing-in is currently awaiting judicial review, with H.R.P.P. challenging the ad-hoc convening of Parliament in the Supreme Court.

Unfortunately, the earliest movement on this case will be on June 14 when the court is expected to set a hearing date.

Interestingly, the P.M-elect revealed in her press statement - issued Monday, 7 June – that she believes the Appeals Court ruling that agreed with the decision to appoint a sixth woman (but disagreed with the timing) is not retrospective. As in, the activation of the 44 (1a) amendment can only be for future elections.

“The conclusion of our negotiations is we were unable to reach a consensus,” he said.

“Their position is to continue on with the court cases until it concludes and secondly because they have 26 seats and we have 25, we should start packing and leave.”

Tuilaepa claimed his opponents are demanding that they [H.R.P.P.] recognise their [F.A.S.T.] swearing-in under the tent on 24 May as a lawful act.

Samoa, despite the shocks and historic firsts we have seen and heard over the last two months, it wouldn’t be a stretch for us all to agree that it is very unlikely that Tuilaepa will endorse the F.A.S.T. swearing-in ceremony at Tiafau.

There is a certain aspect of the Appeals Court decision last week, on June 2, that seems to be the root of opposing interpretations and is perhaps contributing to the continued impasse.

The Appeals Court has ruled that the Office of the Electoral Commission can activate the 44 (1a) amendment for an additional member or members after petitions and by-elections.

The caretaker Prime Minister has said that there can be no Parliament until the women’s quota has been achieved. In his view, if the Constitution states that the Legislative Assembly is made up of 51 seats, of which 10 per cent must be held by women, and if the Appeals Court has agreed with the need for a sixth woman based on the April 9 results, then how was the May 24 swearing-in by the F.A.S.T. party lawful?

Whereas F.A.S.T. party counsel, Taulapapa Brenda Heather-Latu, who stepped in to replace the Head of State at the May 24 swearing-in, believes the ceremony to be lawful, pulling no punches last week when she told PMN Live that Tuilaepa “apparently has no status.”

Taulapapa and the F.A.S.T. legal team do have an impressive scorecard to back themselves up, having gone through eight court decisions in three weeks and winning all of them.

In our opinion, the Courts are the only entity that can provide clarity on this question. Until they do, we are definitely going to hear more of this disparate rhetoric.

And now that the leaders' meetings have broken down and the new F.A.S.T. government is demanding to be given the keys to the kingdom, any room left for civility is fast dwindling.

Speaking on E.F.K.S television last week, prior to the leaders’ second meeting, Fiame was already saying the option of soalaupule was not going to work.

“[It’s] as if he’s almost saying, let’s leave the rule of law altogether.

“But the reason why he wants to put the laws aside is due to the fact that the courts continue to say, no, F.A.S.T. won the general election.

“Now he is seeking cultural solutions and solutions from the religious denominations; but I personally think that there’s no need for that, the rule of law is sufficient.”

Since the much-lauded Samoan way of soalaupule has failed to soften the resolve of both leaders, we are now looking at the likelihood of physical removal and extremely testing times for the public service.

And while we await a Court ruling on the question of the swearing-in, pressure will build across the public sector, starting with the Police and the Public Service Commission.

Is this a case of pin the tail on the ‘who-wants-to-keep-their-job’ donkey?

Whatever the case may be, it raises concerns as to the decision-making going on behind closed doors, especially when it pertains to a key government ministry that are the enforcers of law and order in Samoa.

Which Prime Minister and Minister of Police will the Police Commissioner and his force listen to? Will the Public Service Commission make a call regarding a transition?

So as it stands, if a physical transition of power is imminent, the spotlight will be on our Police, who, like the rest of the country, are currently faced with opposing legal interpretations by two political parties.

How else can a governmental transition take place when the incumbents are refusing to vacate, and the newly-elected majority are driven by a looming fiscal deadline and desperation to get started? 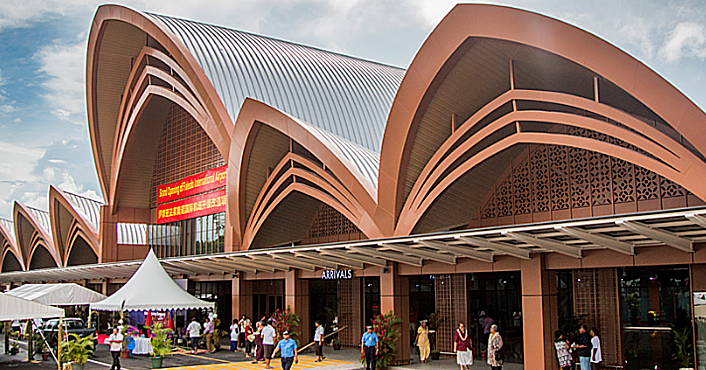