The country woke up on Sunday to welcome the news of six out of the eight suspected coronavirus (COVID-19) cases being given a clean bill of health.

The celebration of the good news would have been muted, as Samoa was only in its second day of a 14-day state of emergency (S.O.E.), as the Government put the country in lockdown to address the threat posed by the deadly virus.

A special Cabinet meeting was convened on Saturday with the Prime Minister Tuilaepa, Dr. Sa'ilele Malielegaoi, announcing the test results after the meeting.

“The test has come back and the woman from Letogo is not affected by COVID-19 as well as another five (people),” Tuilaepa said. “This is good news.”

The results of two other patients are pending, added Tuilaepa, who warned the public to remain cautious and adhere to the S.O.E. orders.

“They appeared to have the symptoms. The difficulty is that these symptoms (of COVID-19) go together with the symptoms of the normal flu,” the Prime Minister said.

“So we are awaiting the outcome of two more tests. But there is still fear that there are some carriers so we have to be careful.”

The Prime Minister is correct, we are not out of the woods yet, and must remain alert and adhere to the S.O.E. orders while continuing to monitor all communication platforms, including this newspaper for updates.

Therefore, it is disappointing to learn of members of the public continuing to disregard the S.O.E. orders immediately after they came into effect 12am last Saturday.

A wedding – which a family went ahead and held at a church in Vaitele despite becoming aware of the S.O.E. some six hours earlier – had a visit by the Police. A bus coming in from the west coast had to be turned back by the Police, and street vendors were forced to return home.

The breaches of the S.O.E. orders, just hours after the Prime Minister’s announcement last Friday, compelled Police Commissioner Fuiavaili'ili Egon Keil to warn that penalties include a fine of up to $10,000 tala or two years imprisonment.

Despite the warning of stiff penalties, members of the public still turned up large numbers at the fish market in Apia on Sunday morning, in breach of the S.O.E. orders and overlooking the appeal by the authorities.

And even the decision by the Catholic Church Archbishop Alapati Lui Mataeliga to hold mass on Sunday, on the second day of the S.O.E., is disappointing as we would have expected the churches to be on the same page with the Government and avoid putting lives at risk.

Again, we cannot take a business as usual approach to the threat posed by the coronavirus, even after the results for six suspected cases in Samoa came back negative, with two test results pending.

The March 13 risk assessment of COVID-19 by the World Health Organisation (W.H.O.) has not been downgraded, it remains at the “very high” category within China, the region and the world. The virus is considered to be more contagious and deadly, especially for the old and the vulnerable members of the community.

The Samoa Government and the Ministry of Health (M.O.H.) continue to provide updates on the global pandemic on their Facebook pages, which include developments in the national effort to reduce the risk of infection.

And with the country only coming out of a measles epidemic that claimed over 80 lives, the promotion of hygienic living standards within families were among various goals, which were put forward as long-term solutions to lessen the risks of another public health crisis developing in Samoa.

It is why the appeal by the M.O.H. and global health authorities such as the W.H.O. for the public to wash their hands frequently, maintain social distancing of at least 1 metre from someone coughing and sneezing, and avoid touching the eyes, nose and mouth should be taken on board and put into practice by everyone.

Family members, who have recently returned from countries with confirmed COVID-19 cases, should self-isolate for 14 days. Any signs of fever, cough and breathing difficulties should immediately be brought to the attention of authorities.

An explanation by the W.H.O. Representative to Samoa, Dr. Rasul Baghirov, on the challenges Samoa could face to get its own COVID-19 test kit, highlights the need for us to continue to take precautions, comply with the S.O.E. orders, monitor all official communication platforms, avoid spreading misinformation and not panic.

Have a lovely Monday and ensure washing your hands remains a top priority. 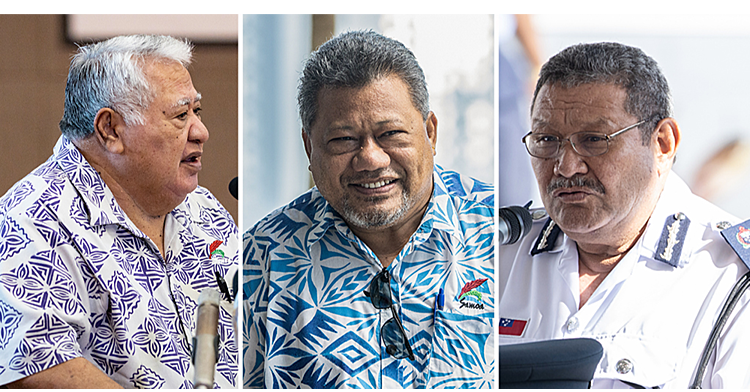 OPINION: Today, think of Taitosaua, the way he was treated and how he eventually resigned. And then think about Leausa, the measles crisis, his behaviour, and how Prime Minister Tuilaepa continues to bat for the Director General of Health. Do you think the principle of accountability, transparency and good governance was fairly applied to these cases?