The ongoing problems in relation to the Digital TV platform and how it is being operated do not reflect well on the Government.

The idea that there continues to be undercurrents and a growing power struggle between the parties involved, just when we thought everything had settled, is disturbing.

What with the bitter row between local TV stations and the Regulator over the monthly tariffs, Prime Minister Tuilaepa’s bizarre intervention and Parliament amending the law with regards to the Regulator over her handling of the matter, to say that it has been messy is an understatement. It has been a disaster.

This is not to mention that the nationwide switch from analogue to digital TV, which should ultimately be the focus, continues to be delayed.

If anything, it’s a bad look for the Government, who initiated this project. The fact we are even having this conversation tells us that the Government did not do its due diligence when they were planning the multi-million-tala project.

It highlights the lack of consultation on the part of all relevant stakeholders, the poor effort put into preparing the groundwork and the proper demarcation of powers, roles and responsibilities, which in turn raises valid questions about laws and legislations.

Now look at the story on the front page of the Sunday Samoan titled “Digital TV platform fairness queried” for instance.  Following an incident where TV1 was removed by Samoa Digital Communications Limited (S.D.C.L.) over a disagreement about an issue, Chief Executive Officer of TV1, Galumalemana Faiesea Matafeo, raises questions about the powers given to S.D.C.L to control the platform. According to Galumalemana, the company has too much authority over the platform.

“There are no terms and conditions given to S.D.C.L. for removing or refusing a TV channel from the digital platform," she said. “We are now subjected to personal ad-hoc decisions and prejudices and much depends on what he has for breakfast! This is exactly what we [feared] right from the start."

The man behind S.D.C.L. by the way is prominent businessman, Fa’amausili Andrew Ah Liki. Asked for a comment, he said: “The problem was every small little issue they run to the Prime Minister, but everything is settled now."

He added: “The bottom line is, we don’t do politics and we don’t run to the media. But in the meantime, everything is settled now."

That’s ironic, isn’t it? Whether Fa’amausili likes it or not, everything involving the Government is political. And the digital TV project is a political tool.

As for Galumalemana running to Tuilaepa and the media, you kind of feel for them; what else can they do? This is Samoa after all where sometimes, all you can do is visit Prime Minister Tuilaepa and pray for the best. Which is precisely what Galumalemana did.

“He [Fa’amausili] wanted me to promise him that I leave politics out and then he may reconsider. We cannot make such a promise because the digital switch is a government initiative,” said Galumalemana.

“And because we were not getting answers from the Regulator, we had no choice but seek assistance from the Government. After all we are bound by law to get on to the digital platform or lose our licenses."

The question is, why was the Regulator not giving answers to TV1? Is that not supposed to be their job to mediate and regulate between these parties?  Well it turns out; TV1 did not lodge an official complaint, according to Regulator, Leafaoali’i Unutoa Auelua-Fonoti.

“What I gathered from the [correspondence] were their own personal differences [with the policy]," she said. “As a result I wrote to both parties to find a resolution to their issues but to ensure compliance to the Cabinet Directive and their legal obligation for the people of Samoa.  As a result TV1's service has since been restored."

Interestingly enough, the Regulator did not respond to questions about the S.D.C.L.'s authority in terms of what they can and cannot do.

Given the recent law change by Parliament with regards to the Regulator’s powers and whom they answer to, perhaps she is doing the same thing as most people in Samoa; visit the Prime Minister, ask him for a solution and wait.

Who knows? Fa’amausili would probably do the same? This after all has become quite the norm on these shores.

The obvious question then is what will Prime Minister Tuilaepa do? What about the relevant officials in his Government?

Since this ongoing drama reflects poorly on them, they need to step forward and fix this mess once and for all. They started it. 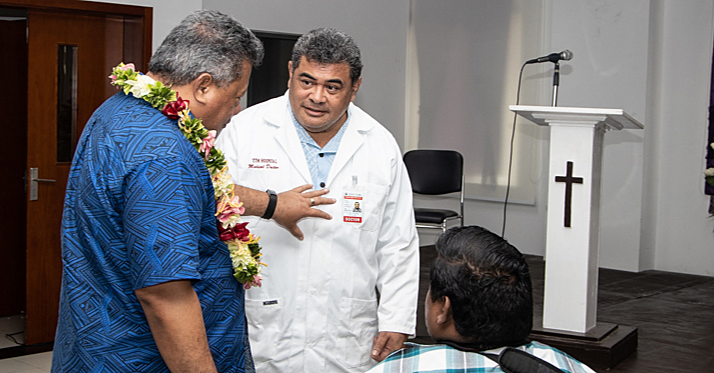