Well, as the wise would say, no one is perfect; indeed, we’re living in a world where everyone is quite capable, of learning from one’s own mistakes.

And as we’re thinking about those words now, let us look one more time at Prime Minister, Dr Tuilaepa Sailele Malielegaoi’s new baby, Samoa Airways, and how it can possibly succeed where his old baby, defunct Polynesian Airlines, had failed.

As we’re doing that though, let’s be reminded that the word to keep closely in mind is honesty; since with honesty, it is quite likely that Polynesian Airlines might have been around today still, and indeed, it might have even become the region’s most successful airline, that we’d all be proud to call truly our own.

Alas, that was not to be.

Because at the time, honesty was simply nowhere to be either seen or found; and that indeed, was a terrible shame. Sure, we know that some will say what’d happened in the past, should remain in the past, but then even if honesty was no longer there, the truth is that the past will still be around; it will simply not go away.

Now, let’s talk about Polynesian Airlines and the debts it’d accumulated, over the years.

By February 1997, the multi-million tala debt it had incurred was not diminishing; instead, it had increased by about $3.5 million and at the time, it was not clear what the exact debt was.

“These startling facts were contained in the 1997 financial statement of Polynesian Airlines (Holdings) Limited, the company the government had set up to handle the airline’s debt,” the Samoa Observer revealed at the time.

At the time, the Observer also revealed that the Holdings Company owned all of the airline’s assets, including aircraft which were then leased to the Operation Company, Polynesian Airlines Limited.

In 1993, the national airline accumulated over $50 million debt in aircraft leases, so that Treasury feared that this would drive the country into bankruptcy.

To pay for the leases, Treasury made substantial advances of up to $6 million to the airline, which also obtained loans from the National Provident Fund and local banks, with the government as guarantor.

At one time, the airline was leasing two three Boeings 767’s and one Boeing 737, from the United States and Canada.

A Boeing 767 lease from Kuwait, with the idea of purchasing it, never flew for  the airline, because it lack standard equipment required by the United States Federal Aviation Administration (F.A.A.).

As a result, that aircraft spent all its time in a hanger in Australia, and only the airline officials knew what had been done with it, and yet at the time it had been accumulating huge amounts in leasing fees.

This represented additional injections of capital funds and capitalised loans, as well as advances sourced from the government, the Auditor’s report revealed.

It appears that at that time also, the company was converting these advances into issued and paid up capital.

At the time company loans were from:

From the auditor’s report, it was clear that inter-company advances, were made.

For instance, by 30 June 1997, the Holdings Company was advanced:

The report said that at the time, an interest free advance of $2,557,012 was owing by the government. It also said that this advance had priority over the distribution of share capital. It was not clear if this advance had been paid back.

However, the report said advances of $8,526,353 during 1996, were made by affiliate companies and were controlled by the company’s shareholder.

It also said the advances were not subject to interest and were repayable on demand.

That day’s edition is printed, the boys are loading stacks of newspapers inside the delivery vans, and the vans are waiting as they’re standing there, just outside the door.

Editor Ropeti Ale was there. He was not supposed to be there though.

“What’re you doing here?” I asked him.

“Just checking if the paper’s printed,” he said.

Jean has wandered off towards the other side of the plant. I picked up a paper and gave a quick glance on the front page.

The story underneath it says Polynesian Airlines (Holdings) Ltd, the company that has been set up by the government to handle the airline’s debts, has warned that the airline’s financial outlook was grim.

As a result, Treasury was worried that since the debts were continuing to mount, they could send the country into bankruptcy.

Now I am leafing through the paper when two men enter the door. They are walking towards me and one of them is handing me a folder.

“We’re from a security company,” the man replies.

“We’re just following orders,” the man says. “We were told to serve the papers and leave.”

Both men are silent. I open the folder and see a document inside it so I pick it up. As I’m reading it I’m aware that it’s a court injunction blocking the distribution of that day’s edition.

I look around and the men are gone. At the door I see their car drive away.

Jean is still on the other side of the plant; she has heard me talking loudly and now she’s  walking over.

“What was that all about?” she asked.

So I told her: “We’ve been served an injunction order blocking the paper from distributing today’s edition.”

I told her: “It appears that someone is worried that a story published in today’s edition, would reveal that some people at Polynesian Airlines, are giving large cash advances and allowances to their senior staff.”

Jean is quiet. She’s somewhat shocked but she remains quiet.

The document said: “The interim order being sought is necessary to prevent irreparable damage to the airline.”

Now looking somewhat confused and sad, Jean is saying softly: “But why would anyone want to do that?”

I say softly myself: “It’s the senior staff of Polynesian Airlines. They don’t want anyone to know that they’ve been stealing from this country, so they’ve gone ahead and requested an injunction to mislead everyone, and the court has granted it.”

As it is now turning out the injunction is temporary.

Signed by Justice Andrew Bray Cameron Wilson, it ordered the paper not to publish “any article or story relating to the salaries, remuneration, allowances and benefits paid to employees, and higher ranking officers of Polynesian Airlines, without the company’s permission.”

As for me, all I’m thinking is that someone would have spent a good part of last night, putting that injunction together, and then somehow he’d managed to get the judge to sign it, and have it delivered still during the night.

And then it is now dawning on me that there’s something terribly fishy here. We have gone through the leaked document thoroughly, our editor showed it to the airline’s top managers who confirmed it was authentic, they even advised there was “nothing illegal” about the alleged advances in question, so why then did they want the article blocked from being published?

Still, how did they know that an article about the advances would be published in today’s paper anyway? Someone in our office must have told them, and soon it became clear that Jean and I were thinking the same thoughts.

It was her who asked Ale: “Did you tell those people a story on the advances would be in this morning’s paper?”

Ale, who was standing nearby, was obviously expecting this.

“What?” I screamed. “Didn’t I tell you no one was allowed to see any story before it was published in this paper?”

Ale was quiet so I screamed at him: “Well, didn’t I tell you!”

Ale jumped and then he said: “Sorry.”

“Sorry, so you’re sorry!” I screamed again. “Does that mean you have a solution to the problem we now have? Besides, what are you going to do with all those newspapers that cannot be sold now?”

I did not pursue the matter any further.

Soon afterwards, he went back to Honolulu. That was where he did his university education, and when he’d returned to Samoa, he was given the post of assistant editor, with the Samoa Observer. 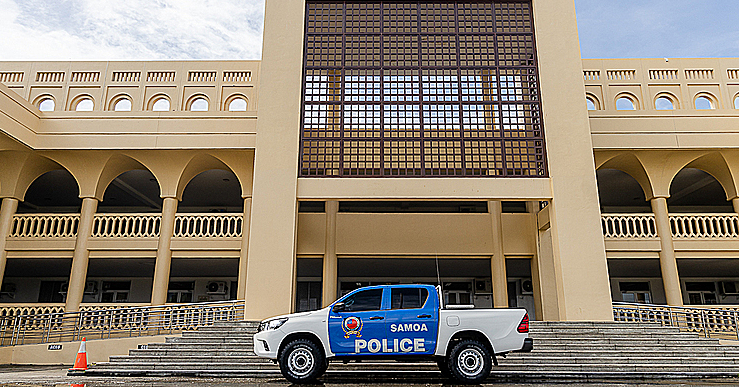 Harmony Agreement: a conspiracy that should never have been entertained

Editorial | "We’re not sure if there is anything to laugh at in this matter. We ar...