“One small step for man, one giant leap for mankind.”

It was those immortal words by Neil Armstrong as he took the first steps on the surface of the moon that came to my mind when Samoa elected its first female Prime Minister, Fiame Naomi Mata’afa.

Not only her election but that of at least five other M.P.s joining her in the Parliament is a first for our proud nation.

Perhaps it’s because progress on gender equality in Samoa - particularly in the political arena - has always been slow going that the election of the Fiame-led Faatuatua i le Atua Samoa ua Tasi (F.A.S.T) party will move the country in positive new directions for female empowerment.

But a Government seeking to achieve women’s empowerment must know that it is an issue that relates to a much broader range of policy areas than most people realise.

A growing list of mistakes at the national borders reflects the pervasiveness of neglectful attitudes towards women’s welfare.

Take the case of Ropeti Sione who fled Samoa in 2017 after changing his name, actually had child support obligations and a departure prohibition order that was not picked up by Samoa’s border security. He was alleged to have been able to leave after securing a passport under a fake name.

The apparent indifference of authorities towards his case until recent probing by the media reflects the lack of urgency among certain Government officials when it comes to promoting women’s welfare.

It wasn’t until the mother of their children approached the Samoa Observer for assistance that Sione was eventually deported from Australia in 2019 - but only after exhausting the time and resources of Australian immigration authorities.

Immigration officials have hailed his return as the result of a successful Government initiative to secure his capture; the reality is it should never have happened in the first place.

I do not believe these attitudes reflect those of the new Government, which now has the opportunity to change a long neglected field for gender equality: immigration.

Two years on from their self-congratulations, I found myself at the centre of a similar case that suggested very little had been learnt from Sione’s case.

I sought restitution regarding the father of my own child, who had fled to Samoa from New Zealand to evade his financial responsibilities in the form of child support payments. 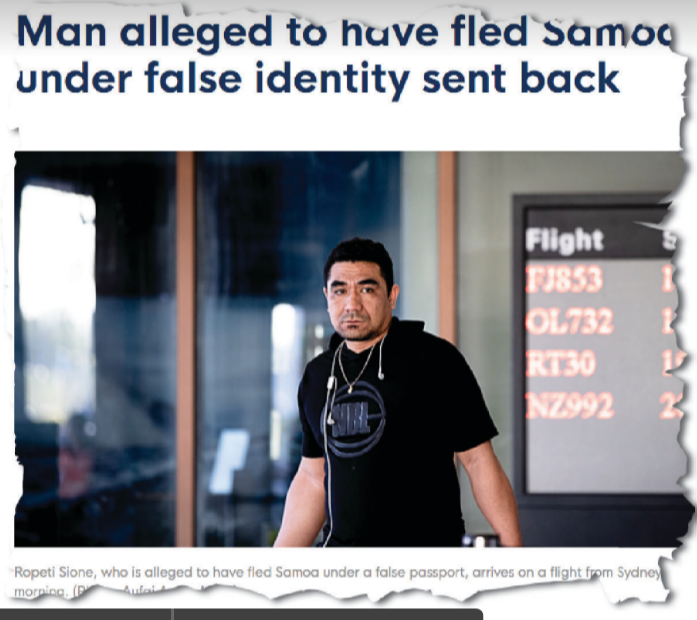 How did he do so?

He was able to escape scrutiny earlier this year after simply changing the name on his passport to that of his Matai title, allowing him to simply disguise his obligations.

Ten years ago, my son’s biological father was ordered to pay child support which, by now, would have amounted to more than $30,000.

I haven’t received a cent for supporting my 12-year-old son. But we are thriving in the Australian city of Melbourne; I didn’t bother enforcing the court order over the years.

After hearing that my child’s father had slipped out of Samoa and was enjoying life in New Zealand (with no intentions of paying child support from there either),  I decided to bring the issue to immigration authorities as a matter of principle.

I thought my own experience, taken together with Sione’s case and how many others about which we do not know, could help Samoan Immigration tighten their processes to flag men with child support obligations and prevent them from bypassing border security. Maybe it could even clamp down on the issue of identity fraud as a whole.

How was he able to leave Samoa despite a court order preventing him from doing so?

How was he able to flee under the disguise of a sacred matai title name? Was his real name and past in Australia disclosed? I doubt it.

At the same time I alerted Immigration New Zealand who confirmed with me that my son’s father was now a high priority deportation case for the country.

But my response from Samoan authorities, including the head of Immigration, Agafili Shem Leo, contained no such urgency when I raised the issue with them.

“The individual legally changed his name, complying with legal processes and procedures for doing so, apropos requirements of Samoa’s Births, Deaths and Marriage Act 2002,” he wrote to me.

“All [Departure Prohibition Orders (D.P.O.)] filed by the Court are valid for 6 months only, and if there is no Court Order to revalidate such a D.P.O., the D.P.O. becomes voided. There was no DBO application filed against this individual since 2010.

“We advise that the Samoa Immigration processed this individual’s passport application in strict compliance with requirements of the Immigration Act and Passport Act, and all the documents he provided were legally compliant.

“Part of our investigation is looking at the name change process which is a legal responsibility of the Office for Birth, Death and Marriage Registration in Samoa.”

What a load of bureaucratic excuse making.

It was as if a new name unburdened him of all his past responsibility.

The C.E.O. maintained that his department had done everything correctly. And yet the response from the New Zealand Immigration Department was polar opposite. They made him a priority for deportation almost immediately.

What suited Samoan Immigration just fine was not acceptable to New Zealand. How could such a difference in standards be explained?

One reason is the burden placed on women by the Departure Prohibition Order (D.P.O.) process. My son’s father was allowed out of the country because the ban on his leaving had simply expired. For me to keep it active would require twice-annual court applications; a costly outlay for any single parent. But the process also shows how the burden and responsibility for seeking rightfully owed child support in Samoa remains placed upon single mothers; it’s a system that supports men.

All of which raises the question: what is the point of a child support court order then?  A court order alone is effective in law that should always be valid enough for any single parent to use in any given circumstance. To have this supplemented by a constant D.P.O. requirement undermines the power of the court order. Should it alone not be enough to raise immigration red flags?

Why should single mothers be burdened with the work to chase down child support obligations, not authorities?

When you allow fathers to change their identities to flee the country to avoid their legal obligation to provide support, you disempower women and children who rely on financial support. Allowing this to continue simply breeds further sexist attitudes within the Government.

The issue of women’s empowerment only scratches the surface in Samoa.

There are those activists who shout their cause from their rooftops and show up to marches when it suits their political agendas.

Then there are those willing to roll up their sleeves and do the hard work such as advocating  for tougher child support enforcement, penalties and help strengthen child support reforms.

Is child support not an issue of women’s empowerment? Is championing the voices and needs of single mothers not women empowerment?  I take my hat off to those organisations that are currently doing so much for vulnerable women and children in Samoa, particularly victims of abuse. But broadening this empowerment to also consider other defining women-centered issues is necessary to a thriving Samoa.

The topic of single mothers has long been the butt of jokes and for many, the idea of child support is unheard of. How dare they ask for child support, they say. Cultural stigmas and shame attached to these labels doesn’t help. This mentality is embedded in our society as well as a tendency for Samoans to naturally sympathise with men rather than women.

The “I live in Samoa” card is thrown around by some fathers as an excuse to avoid paying child support despite their lifestyle suggesting doing so is within their means.

I’m sure there will be people out there reading this article, laughing with glee, calling me a bitter ex, a pa’umuku (woman of loose morals) or that I am just a silly overseas Samoan who doesn’t know anything.

But that only proves my point. Educated people understand that children deserve financial support from both parents. If it can’t be money than significant contributions to food, education or being present for your child speaks volumes.

I feel I am in a privileged position to be a voice for other single mothers in Samoa who find it difficult to speak about this topic or reach out for financial assistance for fear of being judged.

Children deserve the best. If I don’t speak out about this situation in Samoa then who will?

I’m calling on the new Government to carry out a review of the immigration processes to show their true support for the elevation of women's rights.

I am hopeful that legislation and reforms around child support will be reflective of this example and understanding of single motherhood shown by a breed of respectful men who are now in power.

Michelle Obama once said, "No country can ever truly flourish if it stifles the potential of its women and deprives itself of the contributions of half its citizens."