A march has called for greater respect to be paid to the judiciary and for a legal means to be found to ending the political impasse. (Photo: Lupe Mailo)
Politics
Samoans abroad

The ‘Samoa mo Samoa’ march took place on Wednesday afternoon as more than 500 people in Upolu alone demonstrated peacefully in support of the judiciary and an end to the ongoing national power struggle.

The march, organised by So'oau Va’a and Maylynn Brown, began at Apia Boulevard and gathered at the Malae I Tiafau.

Dressed in the colors of the Samoan flag, protestors carried posters with messages condemning the ongoing political battle between the major political parties.

Unlike other recent post-election demonstrations, such as two recent marches in support of women's representation and against violence against women respectively, Wednesday’s march did not include former or current Ministry heads, Cabinet Ministers, former Members, or Members of Parliament-elect. 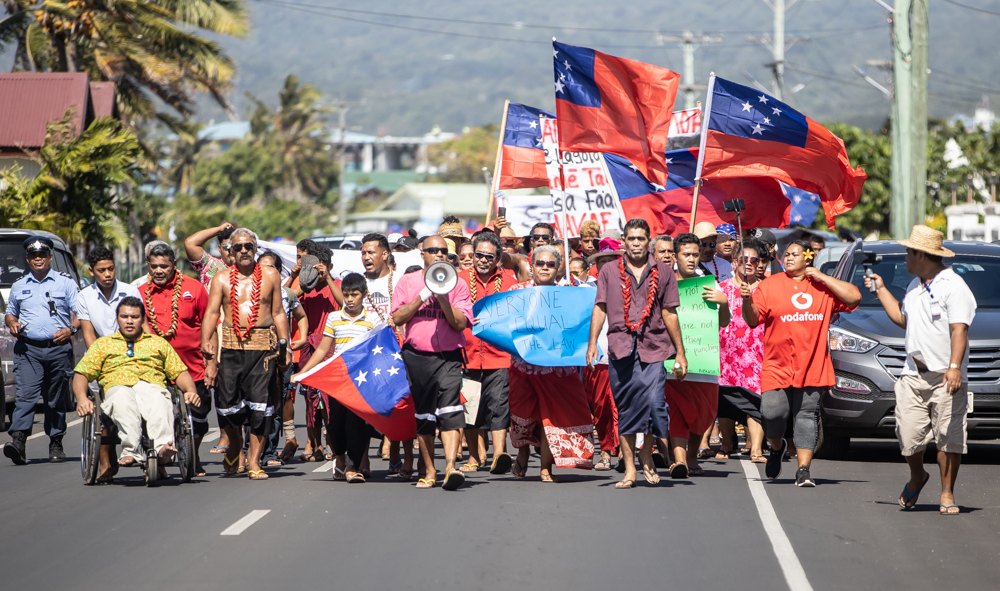 The crowd included representatives of the Samoa Returned and Services Association (R.S.A.) bearing flags of the United States of America (U.S.A.), Australia and New Zealand; the marchers said they were representing the Samoan diaspora overseas.

A spokesman for the event, Peter Jensen, carried photos of his ancestors, men whom he described as heroes who had taken part in Samoa's independence movement.

“We just hope that someone will see the light for Samoa,” he said.

“In those days they were going against foreign Governments and then they got our independence.

“And now we’ve got people within Samoa fighting Samoa and it's quite sad. That’s really sad.

“We have got so many religions; we love one another, but this political impasse that’s happened, it’s really broken Samoa up.

Mr. Jensen said the current situation seems like a ball game between two teams trying to score points against each other.

“Samoa needs a Government; we’ve got to have a united Samoa,” he said. 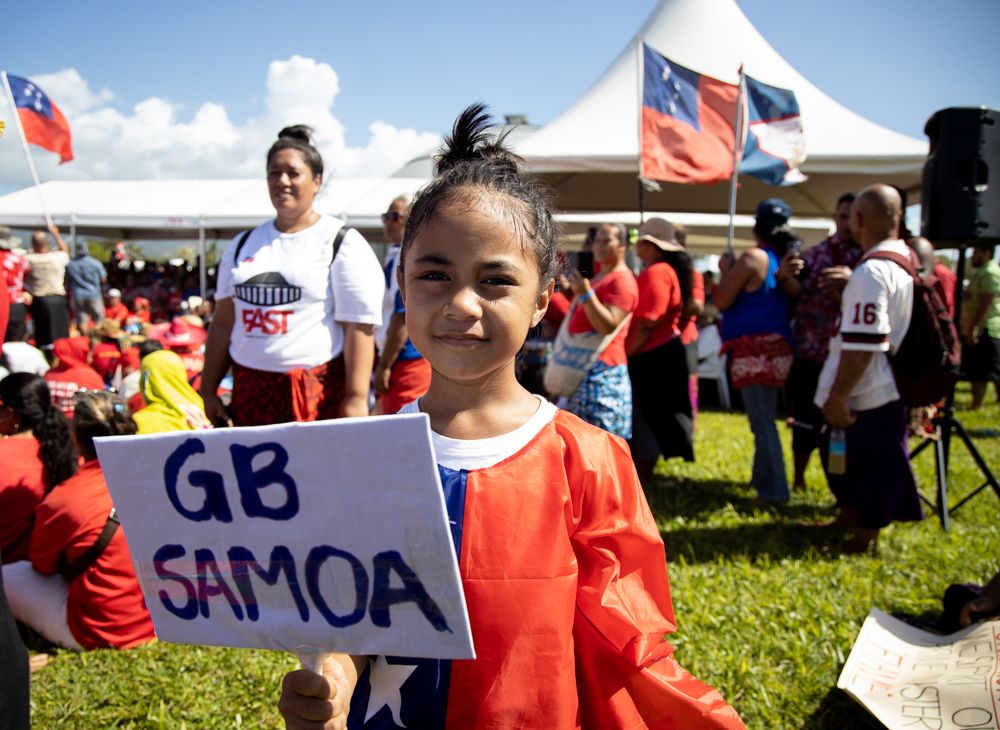 Addressing the crowd, she compared the current political situation to a sandwich; in which the people of Samoa were squeezed between the interests of the two main political parties.

“What’s funny is that is the most important part of the sandwich; it is also the most exciting thing about the sandwich,” she said.

“This is what spurred a thought that we needed to rise, we needed to voice our thoughts, to tell those at the top that we have rights. 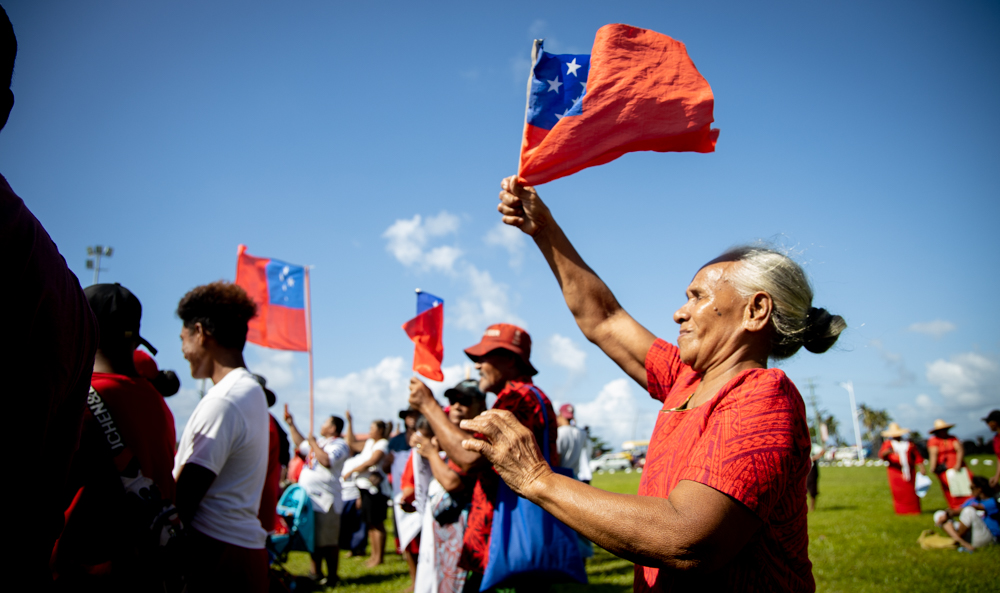 The march was initiated to show support for certain specific causes: to show support for the constitution and judiciary and its independence; the first elected female Prime Minister, Fiame Naomi Mata'afa; civic rights, and to endorse the movement of violence against the abuse of women.

“The very first thing is to stand in support of the building on that side (pointing to the courthouse),” said Mrs. Brown.

“We stand for our judiciary; it’s not Korea’s judiciary or Fiji’s or America’s; it is Samoa’s judiciary.

“The reason I thought we need to support the judiciary is that we have seen the political tactics underway right now. Politics is becoming the reason our nation’s Judiciary is severely undermined.

“And who is most affected if the integrity of our Constitution and Judiciary is undermined? That’s right. Us. You and me.” 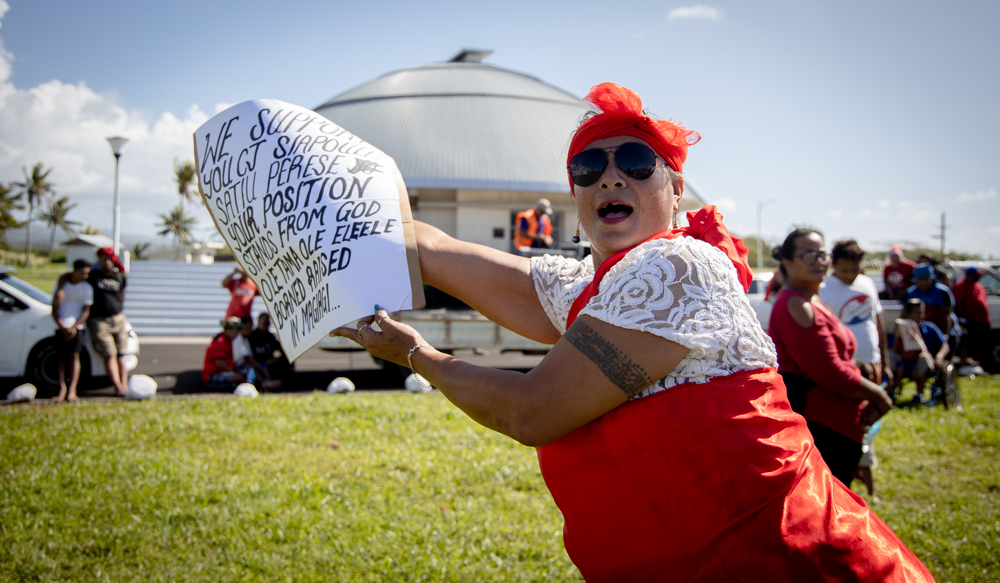 Sitting among the crowd was Sepasitiano Peato Seu from Vaivase, carrying a flag of the nation of Israel.

Mr. Seu thanked the organisers for his chance to walk for Samoa but also as a citizen who didn't want to pick a side politically.

“I am endorsing the need for Samoa to remember that God is the foundation of everything in Samoa,” he said.

“To bring a new day for our Government to sort out this impasse.

“Personally, I am not with either side; I am here with my Israel flag; a hope that whatever God’s will is for Samoa, it may be done for our Government.

“When you see Israel, you see them as God’s village, and Samoa is similar in a way, especially now that we don’t need a visa to go to Israel like other countries.”

The display of support for the judiciary came after the incumbent H.R.P.P. made a complaint to the Judicial Service Commission about the the nation's judges generally but the Chief Justice, His Honour Satiu Simativa Perese, in particular singling him out for criticism such as describing him as incompetent.

“The Honourable Chief Justice appears to be incompetent in the handling of our cases since the beginning of electoral petitions," the party's Member of Parliament-elect Lealailepule Rimoni Aiafi and Secretary wrote in a letter to the commission early this month. .

The commission convened last week but did not resolve the question of whether to address the H.R.P.P.'s complaints.

The Acting Police Commissioner, Papalii Monalisa Tiai-Keti, confirmed with the Samoa Observer that a permit was issued for the march to take place, pursuant to Police Offences Ordinance 1961.

A letter from the Office of the Legislative Assembly signed by the retired Speaker of the House, Leaupepe Toleafoa Fa’afisi, also confirmed the access to use the Malae I Tiafau had been granted for the Samoa mo Samoa march.

(Organisers had earlier complained that receiving permission to hold the march at the venue was not readily being granted.)

The protestors at the Malae i Tiafau were joined by several other demonstrations on Wednesday, including on the big island of Savai'i and New Zealand, both of which were held in support of the judiciary and Prime Minister-elect Fiame Naomi Mataafa