Beloved artist and teacher Ernesto Coter is being honoured in a new exhibition at the new studio the Manamea Art Gallery in Vaigaga.

The Italian artist Mr. Coter, who lived in Samoa from 1972 to 2003, founded the Leulumoega Fou School of Fine Arts in 1987, and his former students are gathering to showcase their work.

Curator and gallery co-founder Lalovai Peseta said the exhibition is both an homage to their teacher, and an opportunity for his former students to gather as a group for the first time ever.

“Most of them are art teachers, they don’t have time to create work of their own,” he said.

“They become rugby coaches after school, they never have time to create for themselves. This opportunity makes them sit down and think and say whatever they want to say.” 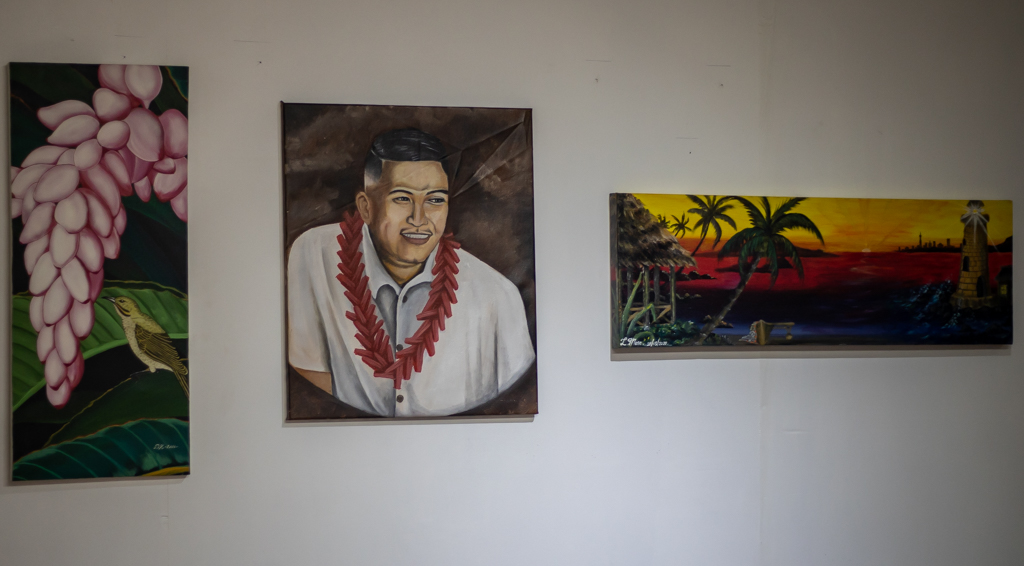 There are 11 alumni exhibiting and the show will be open until Saturday 10 April, with all the works available for purchase.

There are also two “grandchildren” of Mr. Coter: students of his former students, who are now fulltime art teachers too: Leala Mose (Aana No. 1 College) and Jeremy Filo (Leififi College).

Along with Mr. Peseta, William Mauola and Vaiavii Tofilau are also fulltime Manamea Studio artists. Another artist is Alofivae Fautua, who works at Signs Studio.

Among the artists are two making their exhibition debut: Sonny Stowers and Tinai Kenner, who graduated from the school just last year. They both work as artists at Kenner Art.

Mr. Peseta also began his art career as a teacher, with a short stint at Maluafou College and a longer one at Avele College before moving to teach in American Samoa.

They each began their studies at the School of Fine Arts between 1992 and 2018. At least five would have studied under Mr. Coter. 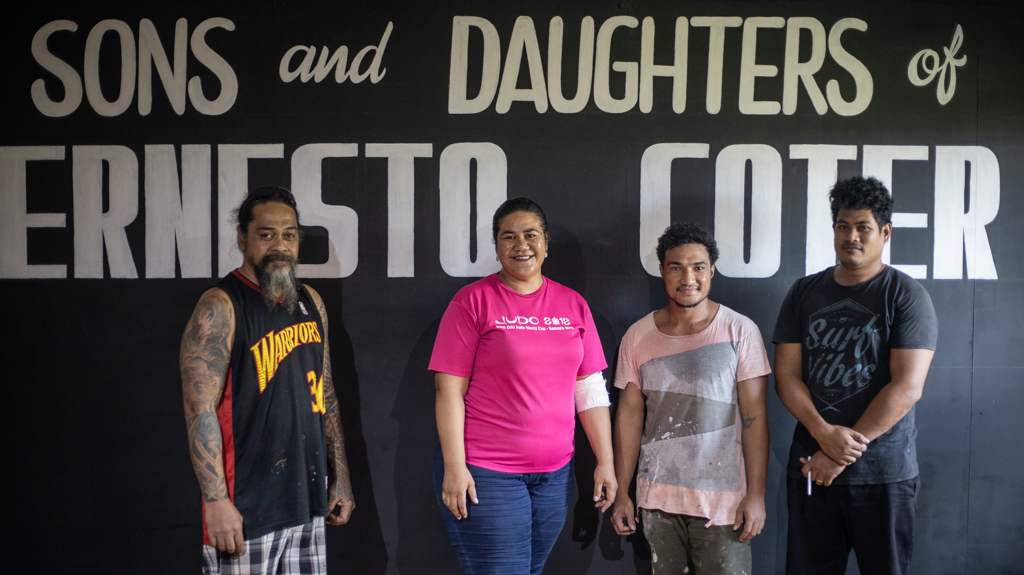 In the “Sons and Daughters of Ernesto Coter” exhibit, Mr. Peseta is trying to showcase the range and talent of the artists who studied under the Italian painter.

Among his more famous alumni are carver and sculptor Penehuro Papalii, who runs a sprawling outdoor gallery and studio in Vaitele, and Fine Arts School Principal Pelenato Liufau.

Mr. Peseta himself studied under Mr. Coter and said he was a positive influence on him as an artist and a person. Mr. Coter complimented him often and wasn’t shy to say when he had something challenging to say.

The two first met each other in 1996, and Mr. Peseta said he hasn’t heard from his old teacher since, but he wishes he could tell him how he is honouring his work.

His own contribution to the exhibition is a portrait of Mr. Coter himself, posing with two paintbrushes in front of concentric circles decorated in Samoan motifs.

In the centre behind his head is a golden root, with branches extending outwards into the Samoan design. He calls the work: “Full Circle.”

“I know for sure, if it wasn’t for him I don’t think I would ever become an artist, because there was no art school. His knowledge and skill spread all over Samoa and now there are a lot of artists here.

“I put the two paintbrushes there because I failed high school, I didn’t get to N.U.S., so I look at the art school like my second chance to try and look for a career.”

Mr. Peseta said he can always tell in someone’s art that they are a Leuleumoega Fou Fine Arts School graduate.

Looking around the exhibition one gets a sense of what he means. The work is insistently Samoan, and steeped in nature the way he taught them, featuring flora and fauna from around the islands. 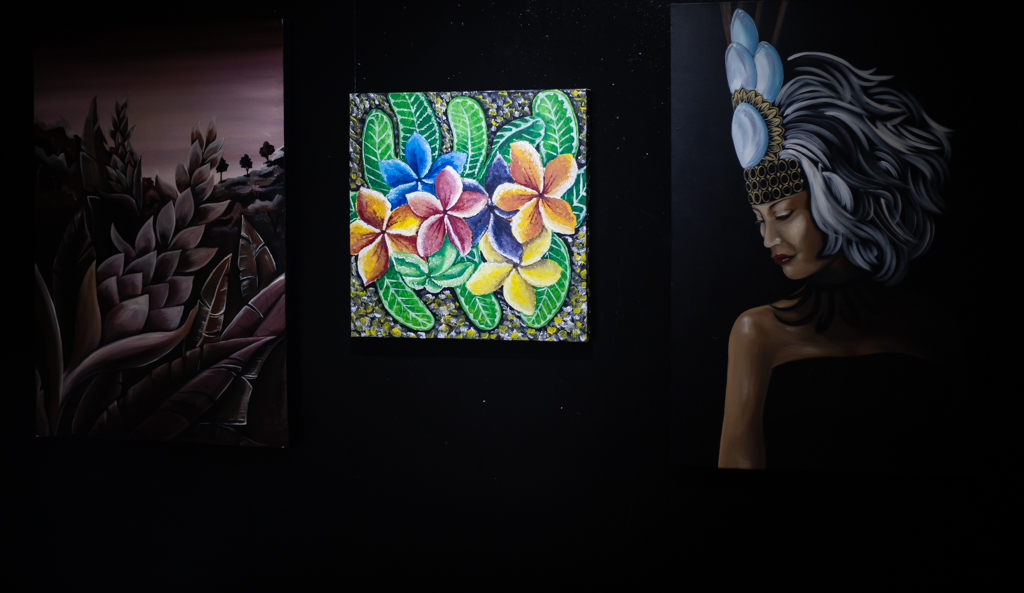 “He told us to appreciate the environment, and most of his paintings are about the environment. In one exhibition he painted the look of Cyclone Ofa […] he really pushed us to not be shy of who we are and what we have around us.”

In honour of their teacher, Mr. Peseta has forgone the traditional 10 per cent commission the studio usually takes for putting on exhibits, he said.

“We are broke, our rent is behind but it’s about bringing the old boys and old girls together to create an event to pay respect to Ernesto.”

Mr. Coter and his wife Maria came to Samoa in 1972 and returned to Bergamy in Italy in 2003. As well as the art school, he also decorated church windows and the windows of the old international airport, some of which was destroyed in the 2009 tsunami.

The Congregational Christian Church of Samoa hired him to open the school, Mr. Peseta said.

Approached by local media The Bergamo Echo after the tsunami, the Italian said his heart cried for his old home.

“I hope one day to be able to return to find my island,” he said.

“Living there is not easy: you have to deal with the climate and the health situation is not the best. In any case, Samoa is in my heart, after all the landscapes in my paintings are often inspired by the events and immanence of nature.” 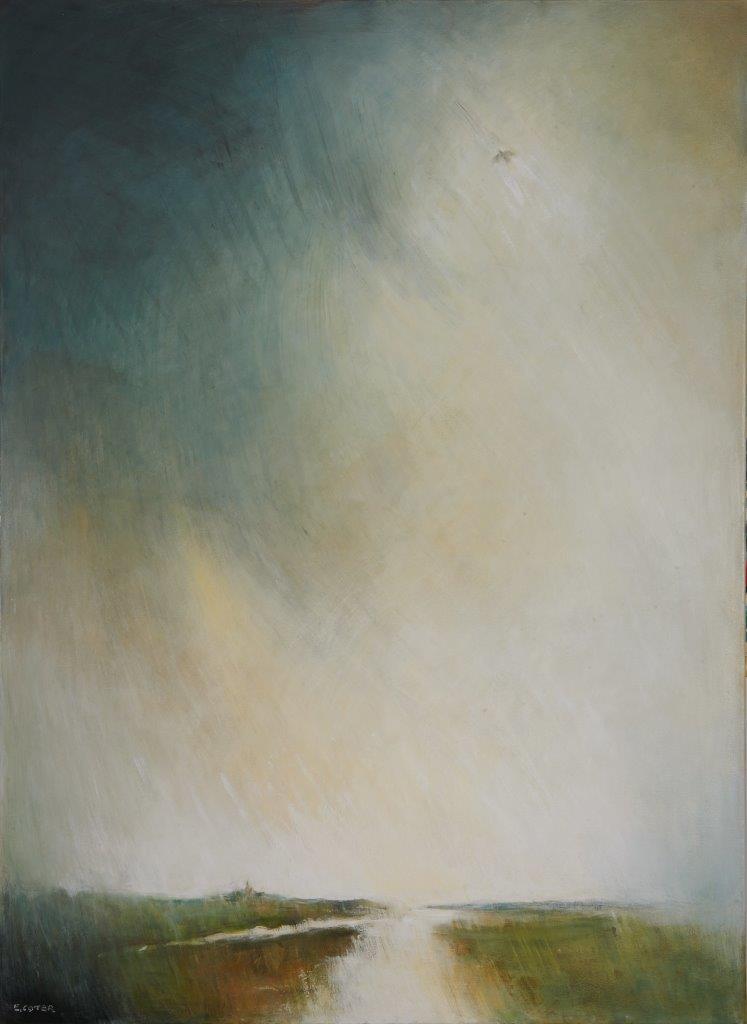 According to the news site Prima Bergamo, Mr. Coter’s father was a famous sculptor and as a young man, Mr. Coter was a successful artist. But his career was “reborn” in Samoa, Prima Bergamo writes of a 2014 exhibition of his work.

“Bergamo looks like a black and white film compared to the colours of the Pacific islands. Sure there are beautiful things here, but the contact with nature is something indescribable. It must be tried,” Mr. Coter is quoted saying.

He exhibited several of the works, mostly abstract landscapes, he made while in Samoa in Bergamo and Milan.

Now in his eighties, the Samoa Observer understands he still lives in a small lake town in Bergamo. His wife Maria passed away several years ago; he has said he likely won’t return to Samoa without her.