An expert on international relations says Australia remains an important traditional partner of Pacific Island nations and Canberra’s increasing engagement will only boost its influence.

Australian National University Research Fellow, Dr. Denghua Zhang, told the Samoa Observer in an email reply to questions sent by this newspaper that Australia remains an important traditional partner and this relationship is underpinned by strong historical, political, economic and security links.

“Under the Pacific Step-up Policy, the Australian government has been increasing engagement and cooperation with the Pacific, which I think will boost Australia’s influence in the region,” Dr. Zhang said.

He added that the COVID-19 pandemic has affected Pacific islands’ engagement with all partner countries, whether traditional or new partners.

“The full impact is yet to be analysed. It is obvious that some sectors in China-Pacific relations have already been affected, such as tourism and project construction,” he added. “In response, the Chinese side has made efforts to mitigate the negative impact.

“For example, they have pledged to speed up the construction of the national sports stadium in Honiara, which will be used by the Solomon Islands government to host the 2023 Pacific Games.”

Asked if he thinks Australia could be the dominant trading partner in the Pacific in the years ahead, he said: “The full impact of COVID-19 on the Pacific region’s external trade is unclear.”

“Based on data prior to the pandemic, we can see that China and Australia had remained the region’s two largest trading partners (see Figure 1 below).” 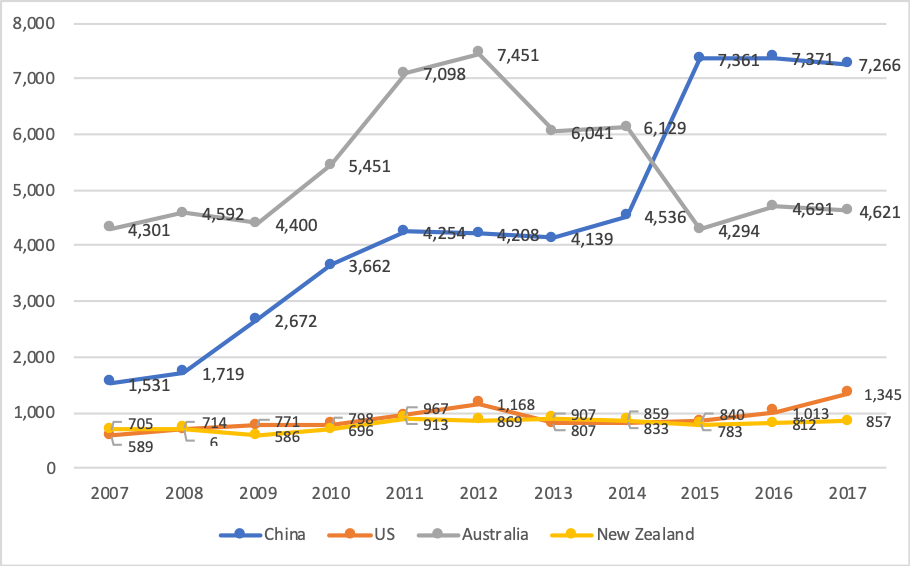 The author of the Bloomberg commentary, Jason Scott, argued that the COVID-19 pandemic is not going to deter China from executing its strategy in the Pacific as it wants to continue to exert its influence over weak, fragile democracies.

And that under a Joe Biden administration, there’s an opportunity for the U.S. and like-minded democracies to show sovereign Pacific nations they have a better choice in who they choose to work with.

Asked for his views on the incoming Biden Administration’s influence in the Pacific, Dr. Zhang said: “The recent years have witnessed growing geostrategic competition between the US (under President Trump) and China in the Pacific, which is largely driven by the US’s concerns of China’s fast-growing engagement with the region.”

“The Biden administration’s Pacific policies are not out yet, but it is likely that the US will continue to focus on maintaining/expanding its influence in the Indo-Pacific.

“Geostrategic competition between the US and China is likely to continue in the Pacific.

“On the other hand, there may be opportunities for the two superpowers to cooperate, such as in the sectors of development cooperation and even climate change, but this will require high-level political commitments from both sides.”