Businesses in vulnerable parts of Apia say they are finding it hard to adapt to recent flash flooding, saying relocation is not an option.

Some businesses were still in the process of cleaning the leftover debris from the last flooding to engulf Samoa on 18 December, when another round of flash flooding struck on Wednesday afternoon.

S.M.I. Hardware located in Fugalei is among many businesses in the area forced to have dashed to protect their perishable goods from low-lying shelves.

An S.M.I. employee told the Samoa Observer that the flooding on Wednesday was not as bad as the flooding in December.

Wednesday’s flooding did not make it into the building.

While yet to calculate the total damage costs from December’s inundation, the company is in the process of seeking new methods for flood-proofing the company’s stock and the company premises.

"We don't know when it might happen again," the employee said.

"But pretty much what we can do [is just] sandbagging the property [and] all the entrances where water can come into the building and that's pretty much it.

Similar sentiments were shared by another business owner, Rosa Brown in Vaea Street opposite Lucky Foodtown.

The recent rapid flooding is "annoying", she told the Samoa Observer on Thursday.

Ms. Brown also said the effects were minimal compared to the December floods, where water reached almost waist-high in her business, the Fonoti Store.

The store is located in the corner of a two-storey building.Billiard pool tables outside are also operated by Ms. Brown, as well as a taxi stand in front of the building, which is located next to a barber store.

All these businesses face setbacks as the result of excessive rain and the mud left behind when the water recedes.

"And well, we're so used to it, as soon as we see the water coming, everything is put on high places," she said.

"Also it is good it happened in the day time, there was time for us to move, but when it happens overnight, we can't be here and by the time we come everything is all gone."

She also lamented that passing cars drive by too fast, spurring waves into buildings.

"The Government just needs to block the road as soon as there are floods," she suggested.

When the Samoa Observer arrived at Ms. Brown's store, their small chest freezer was still propped on top of a high table where they had shifted yesterday to avoid damage.

"We had only finished cleaning up this morning at 10.30 [a.m.], even over there at Body Shop (across the road from Fonoti Store), even with the sandbags, water seeped inside and after that, there's just mud," she said.

The same situation was experienced in Fugalei for the Island Grill restaurant. 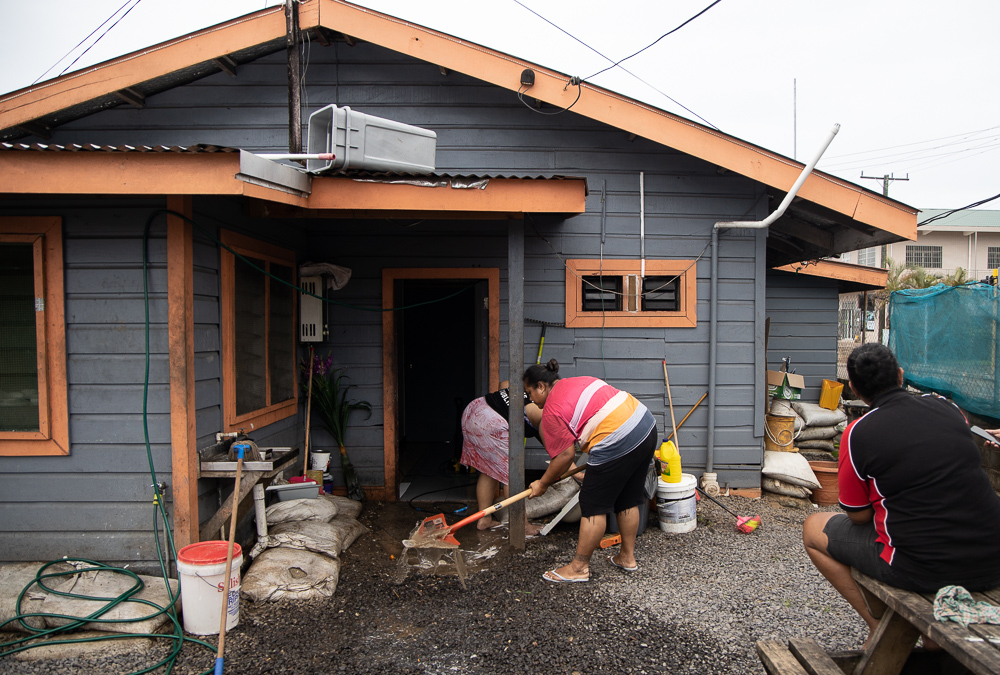 Manager Vienna Schmidt said the sandbags propped in front of the building’s entrances failed to prevent water from entering the building.

But the flooding came during the day, when restaurant workers were able to move quickly to rearrange the building to avoid the damage similar that had struck last year.

Ms. Schmidt said during the December floods, three major air conditioning units and a large freezer had been damaged.

"The convergence zone is now slow-moving South of Samoa. Meanwhile, a moist Northeast to North wind flow prevails over the group," a notice from the MET Office, issued Wednesday, read.

"However, the system may continue to provide heavy falls and few thunderstorms, mainly over the Southern Districts due to its proximity from the Islands."

The public are still advised to expect heavy downpours with poor visibility, gusty winds in showers, foggy and slippery roads over mountain passes and ranges, pooling near roadsides and waterways.