Samoa
The turtle has been named 'Lady Moegaamanaia' for the location where it came ashore; it measures more than a metre in length and metre in width. (Photo: Supplied)
By Tina Mata'afa-Tufele •   06 January 2021, 10:00AM

The owner of the Moegaamanaia Beach Fales received an unexpected enormous marine guest on Sunday night.

A green turtle, measuring more than a metre in length and breadth, waded ashore and into the resort's 'chapel'. Officials, who say they have never seen a bigger turtle come ashore in the area before, are now checking records to see if it is of record size.

The unusual turtle stayed put in the chapel - a "white house" in which the resort holds weddings - until Monday afternoon when staff from the Ministry of Environment and Natural Resources (M.N.R.E.) released the creature back into the wild.

Seventy-seven-year-old Fuamago Masoe, the owner of the resort, told the Samoa Observer it was quite an experience to see and play host to the female turtle who came ashore looking for a place to nest.

“I went to my open house to sleep because that is where I sleep, in our open house. I heard noises from our white house on the beach and it sounded like people were pushing the chairs and tables around inside the white house.”

Mrs. Masoe turned on the light but the noises continued uninterrupted.

After turning her light on and off several times with no effect on the noises coming from the house she walked down to investigate. 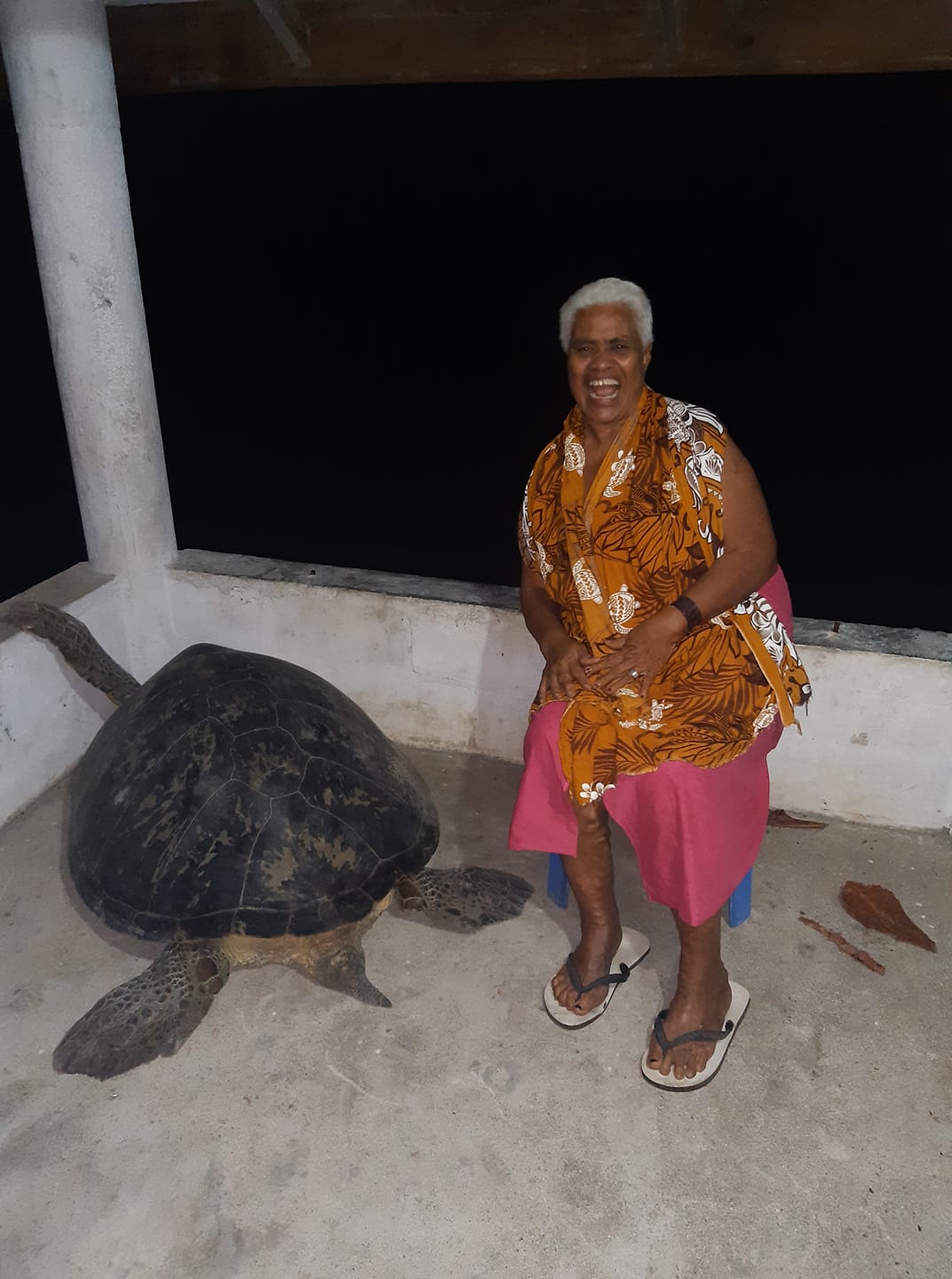 “I turned on my light and I thought it might be people. I don’t know what it was. So anyway, I turned on the light and turned it off but I could still hear the legs and tables of the chairs grinding on the floor because they were being pushed and moved around,” Mrs. Masoe said.

“I turned the light on three times but I could still hear the noises. So I stood up and walked to the white house.

“I turned on the light in the white house and I ran because I was scared. I am 77 and this is the first time I have ever seen a thing like this.”

She went to where her children were sleeping and called them to the white house.

The white house is also called the “chapel” at Moegaamanaia because it is where weddings are held at the resort.

“I went to where my children were sleeping and I called out their names to come with me to see what it was because, as long I have lived, I have never seen such a thing,” she said.

“I have seen photographs of turtles in newspapers but I have never seen a real turtle.

“The turtle kept crawling around, going this way and that way so the kids went and flipped the turtle over onto its shell so that it would stop crawling around making lots of noise with the tables and chairs…this was between 10 and 11 at night.”

One of their relatives in Apia was contacted for help on how to respond to the situation.

The turtle was photographed and monitored for several hours. Mrs Masoe said the excitement caused by the turtle kept them awake until the early hours of Monday morning.

“My children went back to sleep but I went and slept in the fale next to the white house where the turtle was.” 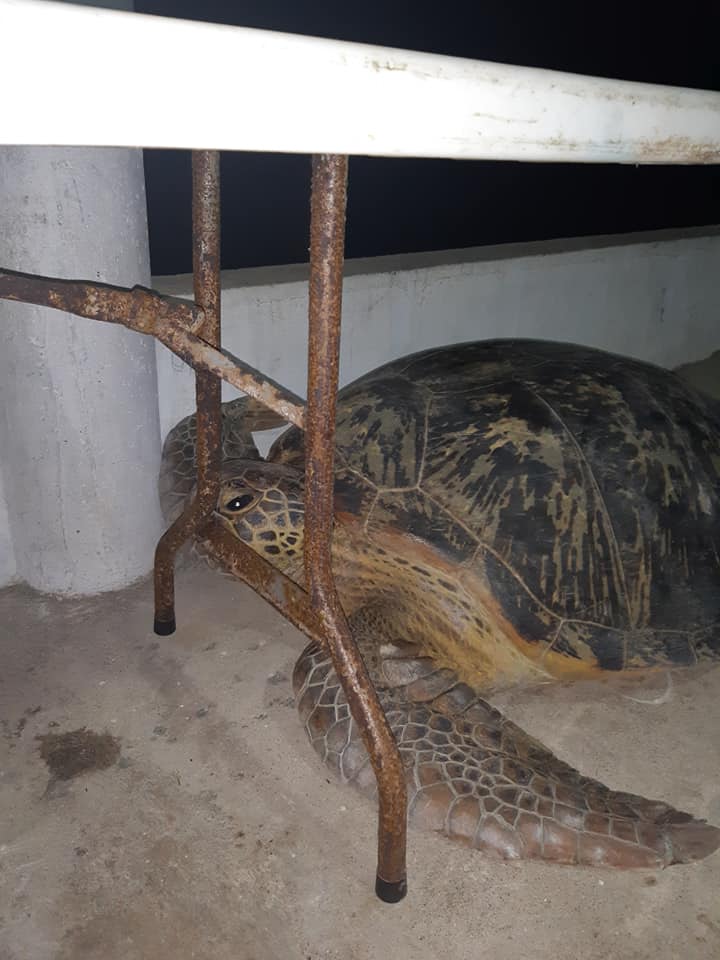 “When we woke up in the morning after our chores - cleaning and what not - we all came and sat around with the turtle and watched her until the men from the Ministry (M.N.R.E.) got here,” she said.

“They said it was the biggest turtle they have ever seen.”

A team of four from the Environment and Conservation Division (E.C.D.) at the M.N.R.E. responded to the call from the beach fale resort.

Marine Officer at M.N.R.E., Pati Iene, who responded to the call, said the turtle came ashore, looking for a place to nest.

They measured the turtle and tagged it and placed it back into the ocean on Monday afternoon about 2 to 3pm.

“It was a green turtle. We measured, tagged and released it back into the wild,” the Marine Officer said.

“I have been here five years but my principal who was also there has been here for 10 years.”

The E.C.D. is going through its records to see if the turtle was the largest ever recorded on Samoa’s shores.

“It came to nest. This is the season for nesting turtles, from January through July,” said Mr. Iene.

He reminds the public that it is illegal to harm a turtle and asks that you contact the M.N.R.E. on telephone 67200 to report turtle sightings.

Iene told the Observer the turtle has been named “Lady Moegaamanaia” for where she came ashore.

According to a Secretariat of the Pacific Regional Environment Programme (S.P.R.E.P.) Fact Sheet, the green turtle (Chelonia mydas) is a large turtle with a small head and an oval green-brown carapace. It eats mostly seagrass and algae, and so are called herbivores.

This species of turtle is found throughout the Pacific in feeding grounds and nesting areas such as Surprise Island in New Caledonia, Gielop lsland in Yap, and Scilly Atoll in French Polynesia. Green turtles that nest or feed in Australia often migrate to Pacific lsland nations.