As Samoa's economic decline continues, large fishing exporters are increasingly seeking to buy their catch from Chinese competitors rather than incur the costs of taking their own vessels out to sea.

Ministry of Finance figures released on Tuesday showed that the fishing industry contracted by 20 per cent last Financial Year making it among the worst-hit industries by the economic downturn; its decline has been even greater than that undergone by accommodation and restaurant providers. That decline is only likely to have gathered pace as the nation’s economic downturn gathers speed.

One major effect of reducing revenue is that local fishermen are increasingly forced to quit taking their boats out to sea and instead buy their catch from Chinese long-line fishing operators who reel in their catch from in and around Samoa’s waters.

Fata Siggie Levi, 47, who owns Tradewinds Fishing Company, is a local fish exporter who has been casting lines in Samoan waters for his entire life.

But increasingly, Fata is like many Samoan fishermen turning to Chinese operators to supplement his catch as the economics of the industry change and fish become more expensive and more difficult to catch.

Buying fish from large-scale Chinese operators isn’t cheap, Fata told the Samoa Observer, but it is less expensive than taking his own boat out.

He says shifting to purchasing from wholesalers has not entirely supplanted his own angling operations; he continues to fish on his boat the Tokalani.

But it does allow him to supply his fish and chip business at the Apia Fish Market.

“I do both. I buy from the Chinese and I also go fishing. As you know the fishing season is six months. It starts around June or July [to the end of the year]…I have a fish and chips shop at the fish market,” Fata said.

“When the season is over it is cheaper for me to get my fish from the Chinese for my fish and chips, than it is for the boat to go out fishing.

“For the past couple of years, I have been buying fish from them. The fish is not cheap.”

But the challenges posed by the downturn led by COVID-19 have made business even tougher this year, Fata says.

“This year has been very hard for us. I have to re-fit my whole fishing vessel with a new engine, a new generator and all that so I haven’t been fishing this year but hopefully next year is a better year for us,” Fata said.

And so Fata has increasingly been buying his supply from Chinese fishermen.

“Like I said, it is not viable for the boats to go out when there are no fish out there,” Fata said.

Fata received some assistance from the Government through COVID-19 stimulus funding but he notes it was not enough to cover the overheads of his fishing operations.

He says he believes that Chinese fishers have some kind of economic advantage over their Samoan counterparts, such as subsidies for expenses such as bait or fuel.

“But we get nothing,” he says.

“We did receive a gift from the Government through the COVID-19 [funding] and we appreciate that but the fuel is the biggest expense that we have.

“They gave us $3000 and some duty-free privileges for fishing gear. But the gear has always been free.”

Although he is increasingly forced to purchase from Chinese-owned vessels, Fata, as a long-time exporter, would rather go out and claim his own catch.

“[But] it is very expensive at the moment.

“Then you have got the electrical bill from [the Electric Power Corporation] and it is not cheap. And there is water. 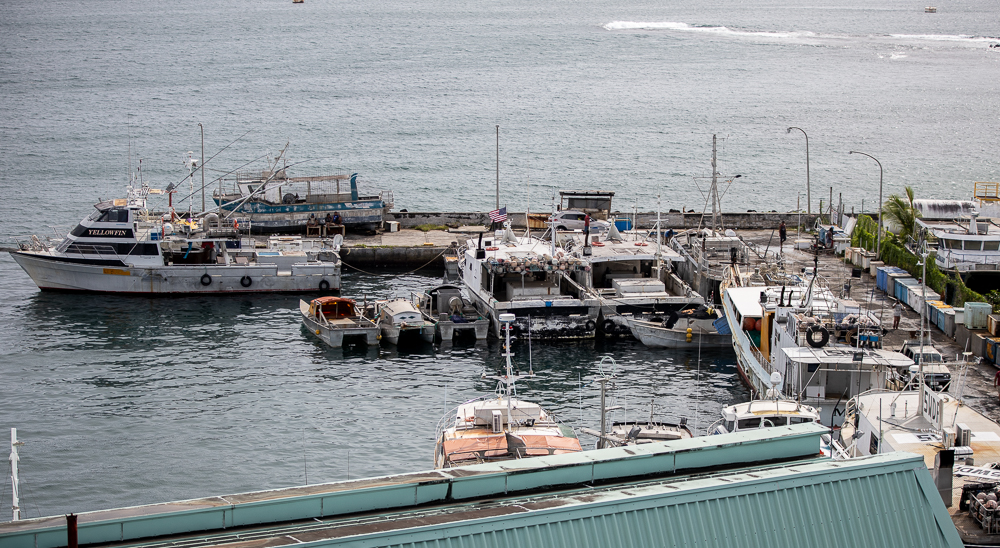 “I wish we could get more help with fuel and bait and stuff like that so we could do what we do.”

“We export fish to Pago Pago and America for fresh sashimi. The main export is albacore tuna to Pago and fresh yellowfin and bigeye to [Los Angeles],” said Fata.

But he claims that his competitors, Chinese vessels, enjoy benefits from their own Government which allows them to corner the market in the vicinity of Samoa's maritime border (also known as the country's Exclusive Economic Zone).

“The Chinese keep fishing. The boats are licensed in our waters too. Some of them are fishing in our zone, I guess," he said.

The Samoa Observer approached the Chinese Embassy in Apia to ask whether there was any truth to the claims that the Government was providing subsidies to vessels in Samoan waters.

In an emailed statement responding to questions from the Samoa Observer, a spokeswoman for the Embassy of the People's Republic of China said the country is “a responsible fishing country”.

The spokeswoman did not directly respond to claims about whether any private Chinese vessels received Government subsidies but did say that the country strictly implements the United Nations Convention on the Law of the Sea and other multilateral and bilateral agreements.

She added that China’s compliance record “is spoken highly of” and through bilateral arrangements “with the coastal states concerned, China conducts fishing activities in their exclusive economic zones, which has produced good economic and social results."

“We have long been in close communication and cooperation with relevant countries and are committed to preserving the production order of marine fisheries and marine ecological environment.”

China's practice of fishery management is fully consistent with the requirements of international law, she noted and the country undertakes work in tackling illegal fishing and promoting the sustainable development of fishery resources.

But Greg Hopping, of Troppo Fishing Adventures, offers a different perspective. He is gravely concerned that permitting Chinese vessels to fish in Samoan waters will deplete Samoan fish supplies and ultimately threaten the nation's food security.

“Now the Chinese have got the right to fish in our territorial waters,” Hopping said.

“They are not only fishing just outside our traditional zone, now they have been given permission to fish inside so they can fish right up to the beach…now I can’t qualify this but this is what I have been told.”

Hopping is a member of the Samoa International Game Fishing Association (S.I.G.F.A.). He has been fishing Samoan waters for 20 years.

He also alleged that the Chinese Government does provide subsidies for Chinese-owned vessels.

“They are all subsidised. It’s common knowledge,” Mr. Hopping claimed.

Fish retailers who are not catching enough fish are going to Chinese fishermen to meet the demand of their clients or customers, he said.

"What are they doing? When they don't have big catches, they are substituting their catch with Chinese catch but the problem with the Chinese is that they kill everything," he said.

Mr. Hopping says that he received reports of a Chinese vessel fishing 10 miles off the shore two weeks ago.

"The bottom line is that China is trying to feed 1.6 billion people and they will do anything to feed them," he said.

"They are using the fish from our waters to do it...it's rape and pillage.

"They will fish the water until the last fish is in," he said.

“The Chinese think they can fish right up to the shore. This is major. If the Samoan people knew the damage the Chinese are doing to our oceans and to our fish stocks there would be a revolution because within five years there won’t be any fish."

It was not possible to seek a comment from the Ministry of Agriculture and Fisheries (M.A.F.) on Tuesday.

But last year the M.A.F. said it had issued 24 fishing licenses to foreign fishing companies and was looking to increase that number to meet the country’s 5,000-tonne quota of tuna catch.

The Ministry also said that 10 to 12 fishing licenses are registered to local companies and that licenses are issued on a first come first serve basis.

Failing to issue adequate licenses can prompt penalties from the Forum Fisheries Association, the Ministry has said previously.

Last year, the Government received a $30 million guardian-class boat for patrolling Samoan waters, the Nafanua II, from the Australian Government. Its uses include patrolling Samoa's waters to detect instances of illegal or unlicensed fishing.