Buildings and faces across Apia's town centre twinkled with light and Christmas cheer on Friday night with the launch of the country's inaugural Festival of Lights.

A ceremony to mark the occasion was held in front of the Fiame Mataafa Faumuina Mulinuu II Building as hundreds of people gathered to catch a glimpse despite the threat of heavy rain.

Roadblocks were conducted by Police to allow members of the public to walk freely on the roads and footpaths to enjoy watching the various Christmas lights from the Vaisigano bridge, beach road to the Maritime School at Mulinu’u. 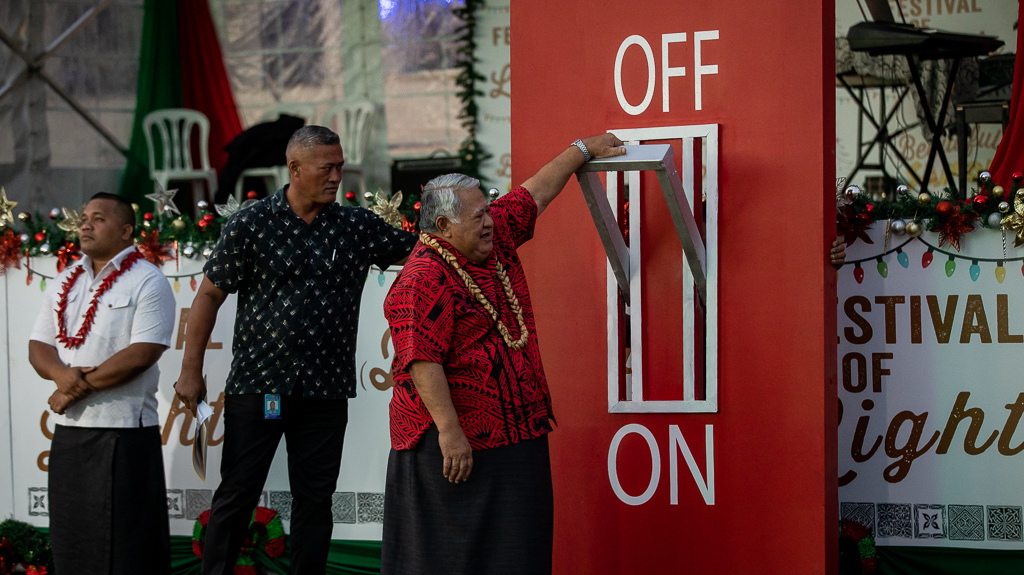 The festival is spearheaded by the Samoa Tourism Authority (S.T.A.), in partnership with Government Ministries and agencies.

Prime Minister Tuilaepa Dr. Sailele Malielegaoi officially flicked a switch to turn on the lights of a Christmas tree after delivering his keynote address declaring the festival open.

The Prime Minister was followed by the Fire and Emergency Services Authority (F.E.S.A.) siren which was the cue for all participating buildings to turn on their lights. 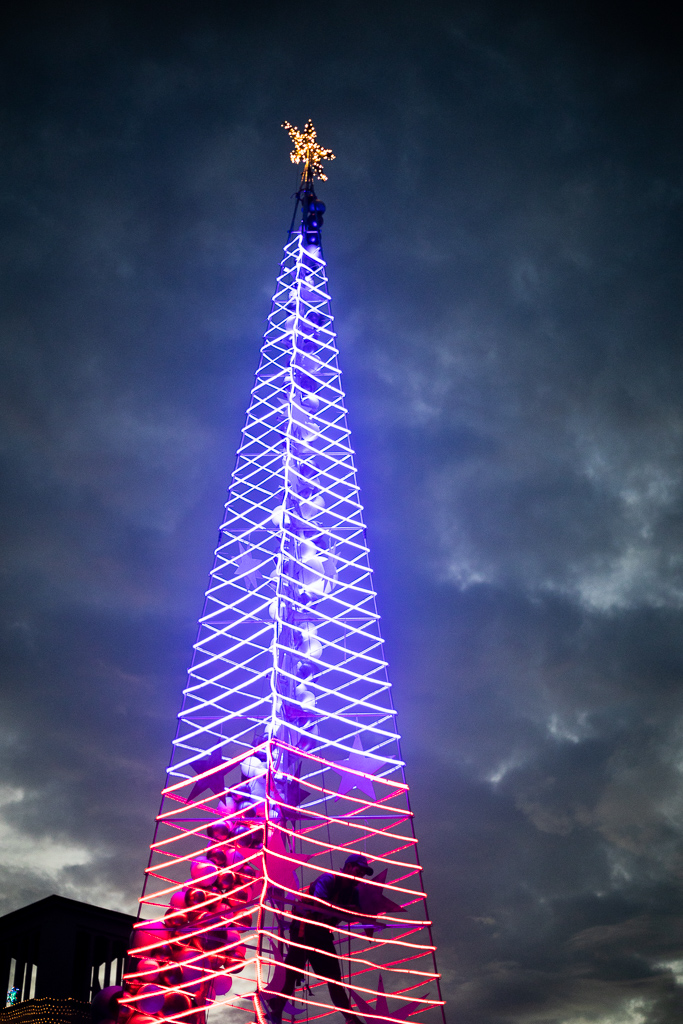 Tuilaepa in his address said that the voyage for this year is gradually approaching the shores.

"We have traversed through rough seas of challenges and trials that seemed endless, relating to the uncertainties the world is facing to date," he said.

He said Samoa has come so far as a nation, bound by the grace of God. 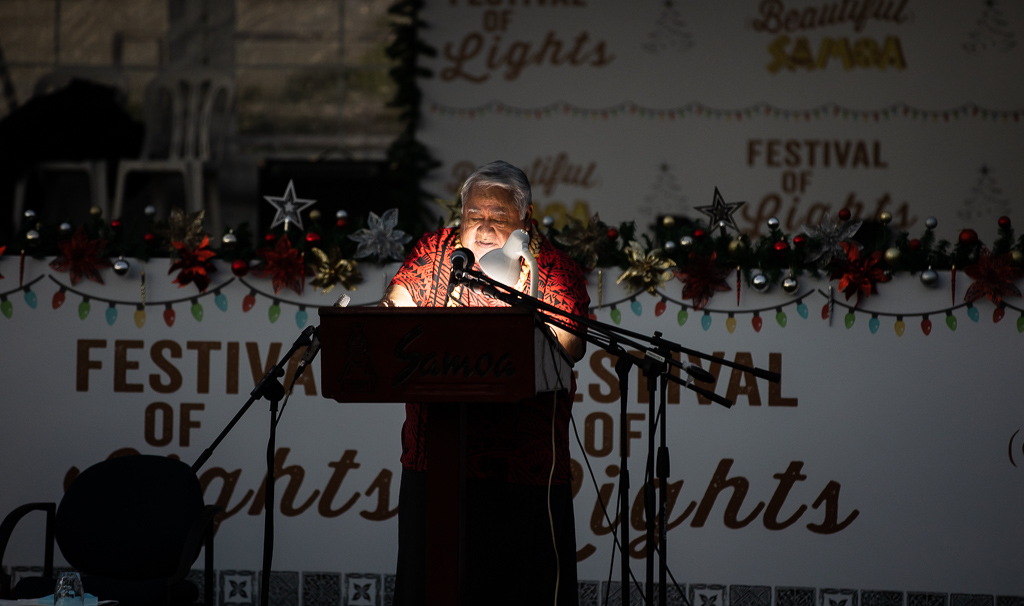 "Our faith in Him continues to be the stronghold of our existence, and the reason for our hope and perseverance," Tuilaepa said.

He also explained that this was cause to be joyful, thankful, appreciative, and to love, for this, we must celebrate.

"The significance of lights began from the masterful creation of the universe. Darkness persisted and the world was formless and empty, and the Lord commanded 'let there be light' and there was light,” the Prime Minister said.

Tuilaepa said that God had created the sun as a source of light during the day while the moon and stars served at night.

"The idea to light up Apia City with colourful twinkling Christmas lights was born out of the glorious divine Light, the Messiah who was born on Christmas Day,” he said.

"Jesus Christ, is the light who descended from above to conquer darkness."

He said that for the very first time, Samoa was bringing a Festival of Lights that has been commemorated across the world, to its shores to celebrate the birth of Jesus Christ.

"The festival’s name is 'Ua oo mai lou malamalama' [your light has come] speaks for itself, and it will be celebrated as an annual event from now on," he said.

Tuilaepa acknowledged the collaborative efforts of Government agencies, the private sector and business community, churches and High Commission offices along the Apia City waterfront for staging such a historic and memorable event.

"I am sure [this] will be enjoyed by our people and especially our children," he said. 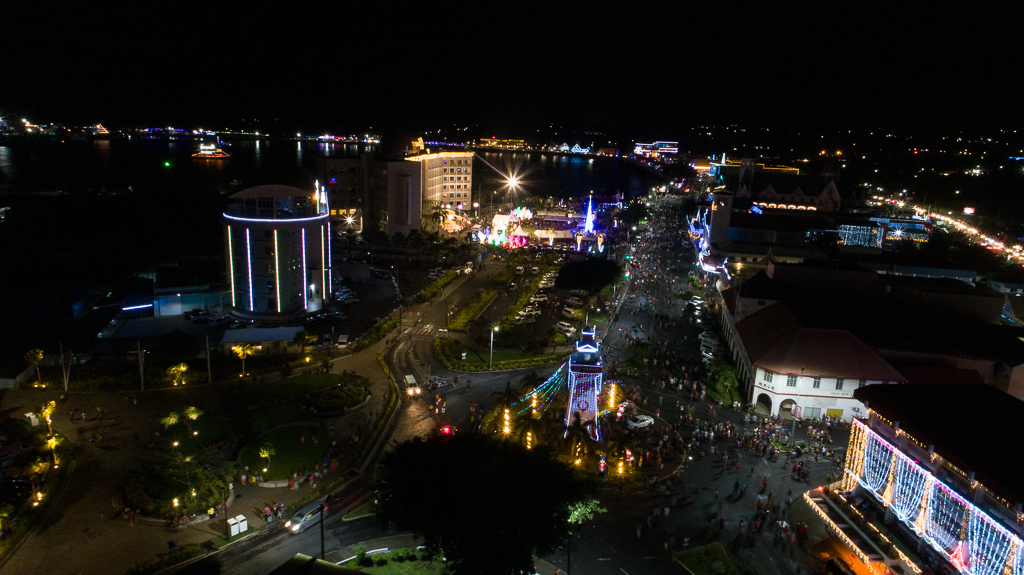 "I am also aware that many villages around the country, through their creativity and innovativeness, have also staged colourful exhibitions of lights.

"Thank you for your support in making this festival a reality.

"Have a merry Christmas and a prosperous New Year Samoa."

A mother-of-three, Telesia Mele told this newspaper that the event brings hope to the hearts of her children and family.

"This is the first time Samoa has done something like this," she said.

She also shared that with everything that has been happening around the world, the Christmas lights have boosted the morale among her family members.

"The feeling of seeing these lights is refreshing and mesmerising, it somehow warms the heart because it has been a year of challenges and difficulties but we are grateful to God blessing us with so many things," she said.

"I am also happy seeing the smiles and excitement on the faces of our children. We have seen some great lights and we have been taking photos as memories of this joyous occasion.

"Life is short, so make each moment count."