The Judges and Justices of the Civil and Criminal Courts have urged a Special Parliamentary Committee to recommend the withdrawal of three bills proposing monumental changes to the Judiciary and the Constitution of Samoa.

They have also warned that the Lands and Titles Bill 2020, Judicature Bill 2020 and Constitutional Amendment Bill 2020 (C.A.B.), set to be discussed in Parliament next Tuesday, will “effectively destroy the Independence of the judiciary” and bring the Supreme Court directly under the control of the Executive branch of Government.

The Judges made the point in a comprehensive 84-page written submission they provided to the Special Parliamentary Committee earlier this year. A copy of the full submission, addressed to the Chairperson of the Committee, Gatoloaifaana Amataga Alesana-Gidlow and Committee members, has been obtained by the Samoa Observer.

It was submitted by Justice Vui Laulusā Su’a Thomsen-Nelson, earlier this year in June while he was the Acting Chief Justice.

“Honourable Madam Chairperson and Honourable Members, we submit that given the issues, risks and concerns raised in these Submissions, this Parliamentary Committee should in its Report to Parliament recommend the withdrawal of all Bills from further consideration until extensive further proper and appropriate national Consultation accompanied by competent Constitutional and legal advice with all relevant parties is undertaken,” the submission reads.

The submission's synopsis highlighted the Judges concerns, and their reasons for asking that the bills be withdrawn.

"There has been no consultation with the public, relevant stakeholders or the Judiciary on these Bills. Importantly, these Bills will also bring about significant changes to the role and structure of the Civil and Criminal Courts, amongst many other significant changes," the Judges submitted. 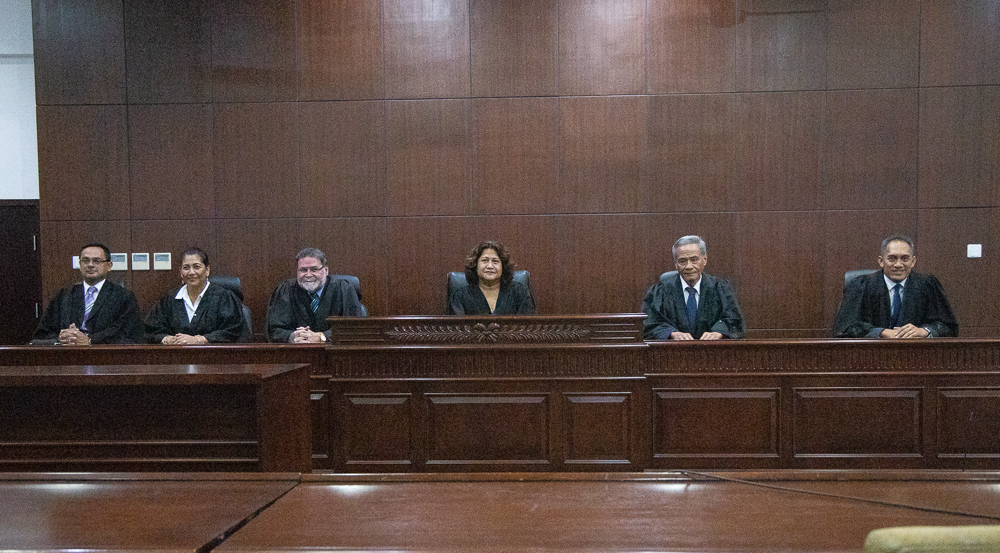 "At no time have we as Judges of these Courts been consulted on these proposed changes. As we have earlier said, we were not invited to appear before the 2016 Parliamentary Inquiry into the Land and Titles Court."

The Judges also noted that the bills deal with many matters that were not the subject of the 2016 Parliamentary Inquiry.

"The Parliamentary Inquiry Report recommended a number of changes to improve the Land and Titles Court and its performance with an ‘independent set-up’ of that Court. Those recommendations were purely administrative in nature and should not have been interpreted as requiring wholesale fundamental changes to the structure of the Land and Titles Court system including to the Constitution and separating the Judiciary into two separate Judiciaries. Recommendations by 2016 Parliamentary Inquiry administrative in nature."

The Judges also took exception with the Samoa Law Reform Commission reports which informed the formulation of the bills in question, saying they were based on "flawed assumption that the 2016 Parliamentary Inquiry Report had recommended changes to the Constitution."

"The Parliamentary Inquiry Report however did not recommend the Constitutional amendments that are now in the C.A.B. The result of this is that the foundations upon which these Bills are built are wrong."

Another matter raised by the Judges is that the proposed two-Court system will give rise to two competing and conflicting judiciaries.

"First, the proposed structure will inevitably create two different and potentially conflicting interpretations of the Constitution and its application to fundamental rights guaranteed by Part II of the Constitution which is our Supreme Law," the submission reads.

"This poses a serious risk to consistency and conformity in the application of the fundamental rights provisions of the Constitution and their interpretation. Second, there is likely to be many circumstances where parties in a dispute will bring proceedings touching on the same or similar issues in both jurisdictions in circumstances where the Supreme Court rules it has the jurisdiction and the Land and Titles Court rules it has jurisdiction, which decision prevails? The structure without a single Apex Court to resolve the conflict between the “two Court system” is unworkable. A single unified Court system with one Apex Court is critical to a functioning and unified judicial system."

The Judges in their submission also delve into the issue of the Constitution.

"The laws of Samoa passed by the Parliament of Samoa and Samoa’s jurisprudence already recognizes customs and usages and strikes a good balance between the protection of fundamental rights and decisions of the Village Fono and customs and usages – please refer to the attached Table 1 which illustrates how the courts of Samoa currently recognize and give effect to Communal Rights and our tu ma aganuu fa’a Samoa," the submission reads.

"The Land and Titles Court is a Court made up of local judges. That is also the case for all of the Judges of the Supreme Court and District Court with local judges now also presiding in the Court of Appeal. It is regrettable to read in various publications and reports suggestions that these Courts are not “Samoan Courts” nor capable of interpreting nor should they deal with matters pertaining to Samoan customs and usages. These are after all Samoan Courts presided over by Samoans all of whom are matai and well versed in our tu ma aganuu; and

"That the mechanism for the removal of a Supreme Court Justice remain as currently provided by the Constitution and the word “dismissing” be deleted from draft Article 80(4). The CAB and JB effectively destroy the Independence of the Judiciary and brings the Supreme Court directly under the control of the Executive branch of Government. This is completely unacceptable..."