Manusina has secured a place at the Final Qualification Tournament for 2021 RWC (Photo: RWC )
HS
By Hyunsook Siutaia, 15/11/2020

The Manusina rugby team has progressed to the Final Qualification Tournament for the 2021 Rugby World Cup after defeating Tonga, 40-0, and keeping their World Cup qualification chances alive.

The Manusina recorded the win at the Trusts Arena in Auckland on Saturday night.

Two of the six tries scored in the game were scored by the team’s winger, Tori Iosefo.

Manusina captain, Masuisui Pauaraisa thanked the team’s families in Samoa and everyone for their prayers.

"We’ve only been together for a week and it’s amazing, the girls have improved and improved every single training. We trusted our game plan, we’re going through,” she said.

The outbreak of COVID-19 postponed the match which had been scheduled to take place in Apia in April. 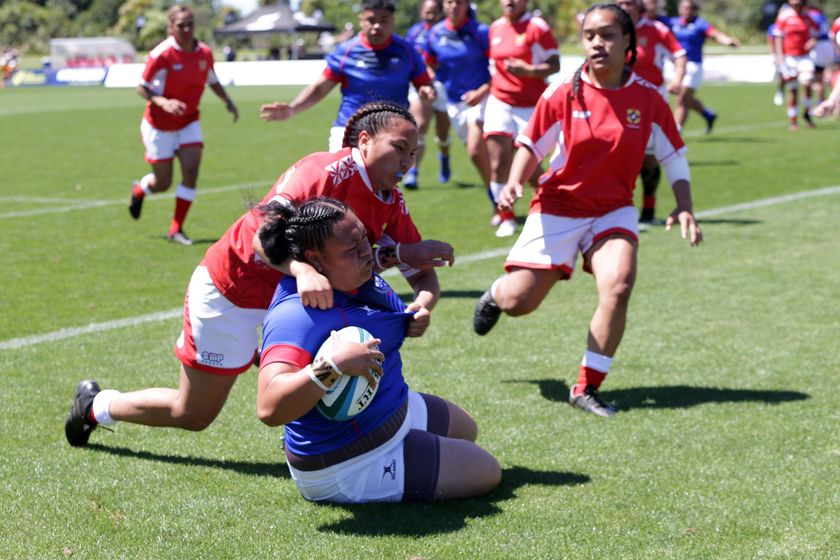 Two years ago, the two teams faced off and Manusina took the win with a match score of 68-7.

The team took the lead on Saturday only seven minutes in after halfback Makayla Eli put a penalty between the posts.

Nina Foaese and replacement scrum-half Jhana Magale later combined for a set-piece play that ended with Iosefo dotting down in the right corner to score a try.

Eli missed the conversion, but a penalty soon after stretched Samoa’s lead to 11 points.

The Manusina were well on top and scored a second try in the 28th minute.

Hooker Margaret Vaiouga was brought down within metres of the line, but her front-row colleague Marilyn Live picked up from the ruck and burrowed over to score. Eli’s conversion to make the score 18-0.

The team’s lead grew again before half-time as Iosefo notched her second try of the afternoon.

The right-wing brushed off her opposite number, Taina Halasima, as she powered over in the right corner once again.

Some players were missing on Saturday's test match as they were unable to travel, due to COVID-19 restrictions.

The full squad that took on Tonga on Saturday included the following players:

The squad that played Tonga on Saturday was:

Samoan students stuck on campus over the holidays are taking up jobs at Brigham Young University in Hawaii while they wait to get home.