Firefighter to serve Savai'i through her new calling

Fetufa'amaomalaga Tuita'ase from the village of Saipipi in Savai'i is ready to embark on her new journey as a firefighter serving her people in Savai'i to the best of her ability. (Photo: Vaitogi Asuisui Matafeo )

With this saying in mind, she is ready to embark on her new journey as a firefighter and has vowed to serve Samoa to her utmost ability.

The 28-year-old from the village of Saipipi on the big island was among the nine female firefighters who graduated on Thursday upon completion of an 11-week training conducted by the Fire and Emergency Service Authority (F.E.S.A.).

And while people from Savai'i often rush to Upolu for employment and work opportunities, Ms. Tuita'ase has chosen to return home and serve.

"When we think and talk about firefighters, we initially think about boys and men. The work does require strength and it's quite unusual for a girl to become a firefighter,” she said.

"Growing up, we had this mentality that men are superior to women. But that has changed over time and it's something that, I am thankful for all the efforts and hard work of the Government and non-governmental organisations who are pushing for gender equality in all aspects of service.

"We have come a long way as a country and it's encouraging to see more women rise up and take up careers that are physical because if men can do it, we can do it too.

"As we usually say in Samoan, "E au le inailau a tama'ita'i" (The women's row of thatch was completed )."

Ms. Tuita'ase previously worked in the tourism sector after graduating with a Diploma in Tourism and Hospitality from the National University of Samoa, Institute of Technology.

She took some time off due to family obligations and duties before she made the decision to try out the 11-week F.E.S.A. course.

"At first, I did not think I could finish it," she said.

"I didn't know what I was doing, but that was something only God knew. He placed me there where he knew I needed to be."

Ms. Tuita'ase was emotional and fought to hold back tears when she recalled the hardships she had to face to get to where she is now.

"It has not been easy," the newly graduated firefighter said.

"I realised that everything and anything is possible if you put your heart into it, and have a strong support group rooting for you.

"I had the best support group that motivated me to reach the finish line.

"In life, you get knocked down a couple of times, but you should never stay down forever. If you fall down, you pick yourself up and start running again."

So why has she decided to return to work in Savai'i?

"Savai'i will be home for me, and as they say - home is where the heart is," Ms. Tuita'ase said.

"I was born and raised in Savai'i. It is where my family is. So it is right that I return back with the skills and knowledge I've gained to serve my community and people."

Lastly, Ms. Tuita'ase said she credits God for her success. 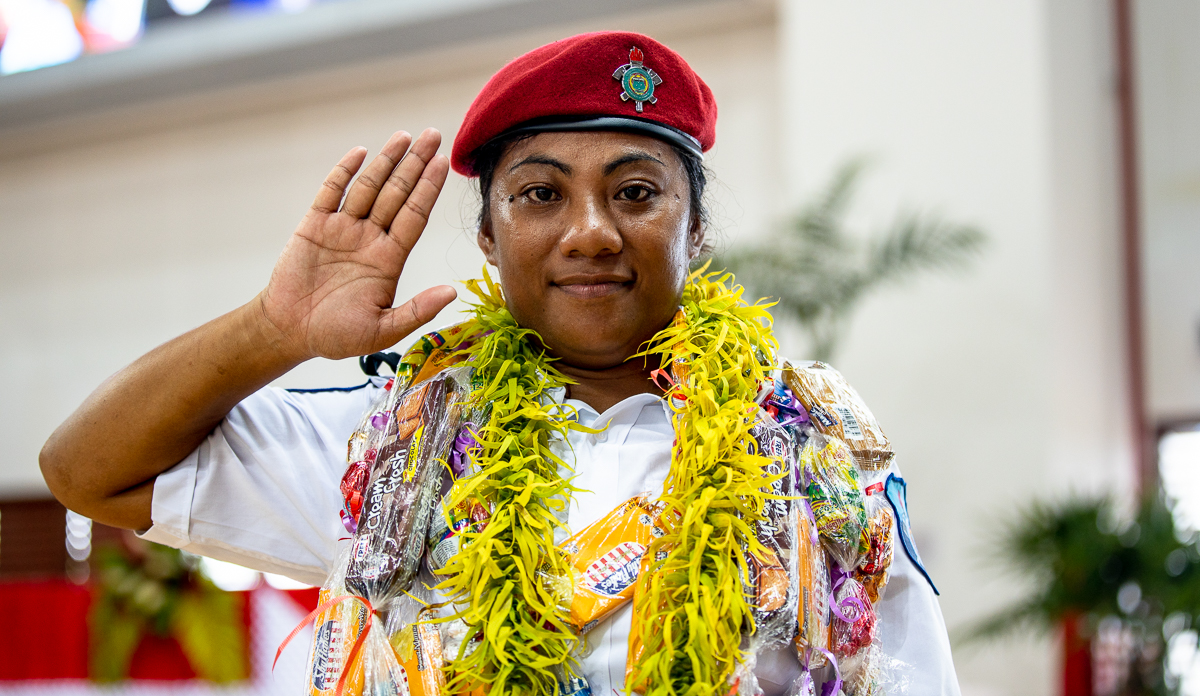 "Without Him, this wouldn't have been possible. He placed me where I needed to be, and he carried me through it. Let His name be praised now, and forever,” she said.

"I also dedicate this success to my families, especially those who have passed away, including my beloved mother, Ana Tuileva.

"I got emotional on graduation day, thinking about her, my grandmother Fa'amao and my dearest grandparents, Tofa Peleti III, and Fua.

"I am who I am today because of them.

"I am grateful to God for the support and prayers of my families in Saipipi, Moamoa, and all of my relatives supporting me from overseas.

"I also want to acknowledge the strong support of my hardworking father, Tuaipulotu Tuita'ase, mother Lulu, and my dearest siblings.

"Last but not least, I want to thank my cousin, Matiu Tuileva, and his wife for their continuous support."

Ms. Tuita'ase will commence working on Sunday at the F.E.S.A.'s office at Maota.

This week’s graduation was held at the Multi-purpose Gym at Tuanaimato on Thursday where a total of 22 males and nine females completed an 11-week training and graduated.

The graduates are the largest intake under the F.E.S.A. training program and were recruited from both Upolu and Savai’i.

A large number of women graduates also meant women represented more than 10 per cent of the total intake.

Giving the keynote address at the occasion, the Prime Minister said the larger representation of women reflects the Government’s support of the promotion of equal opportunities for both men and women.