The legal obligations of Afega's village mayor, Taliaoa Viliamu, have come under scrutiny after a candidate launched a petition against him for refusing to endorse his application to stand for Parliament.

Fata Meafou launched a petition against Taliaoa and the  Electoral Commissioner after his nomination was rejected for the April election.

Taliaoa, represented by Leota Tima Leavai, took the stand and testified that Fata did not render the required monotaga (service) to the village of Afega for his candidacy to be endorsed.

“[Fata Meafou] did not render any service to the village, and I and [obeying] the law and I need to protect me, therefore I cannot sign off on any document because there was no service rendered,” he said.

“From the beginning of the developments projects in the village, they [Fata Meafou and Chiefs of Afega Tai] did not offer any assistance.”

He also rejected claims that Fata Meafou had served the village with the construction of a seawall project in the village.

“There is no sea wall. It was just the rocks [they] piled up, but it is not a sea wall,” he said. 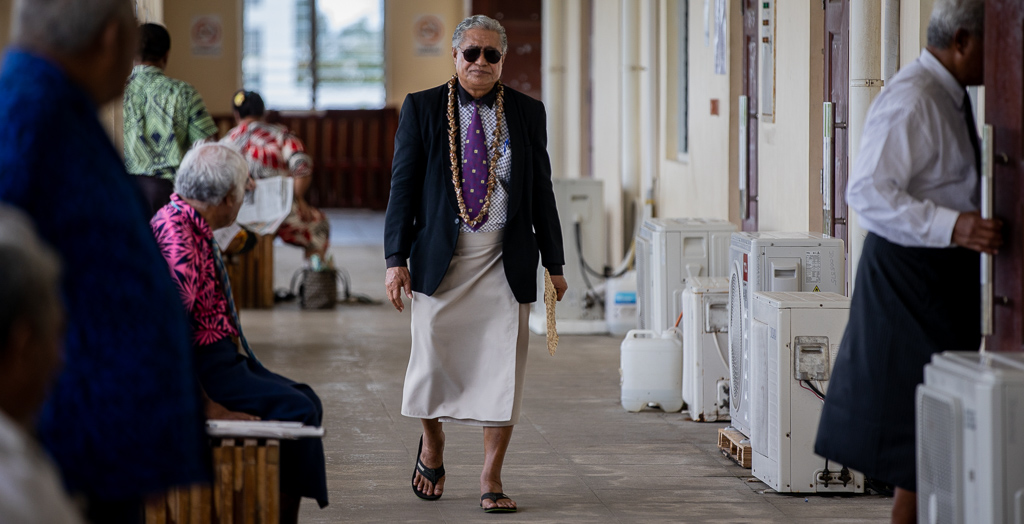 Taliaoa told the court that in 2012 the family of “Savea” was ousted by the village and then they created their own sub-village and called it Afega Tai, but there is no such village as Afega Tai; it is just Afega.

According to the village mayor, he is not aware of what the Afega Tai village council is doing to assist the village.

“I’m not sure what they are doing, but if they did assist with [...developments] I would have endorsed [Fata’s] election papers,” said Taliaoa.

Under cross-examination, Taliaoa told the court the village council of which he is a part, is recognised as Afega, not Afega Tai of which Fata is a member of the Village Council.

Lefau asked Taliaoa whether the village of Afega is currently in disorder, hence its being two separate village councils since 2012.

“That is not true. They broke away from the village, but there is no [disorder] amongst us, it’s them that don’t want to reconcile with the village,” said Taliaoa.

Lefau put it to Taliaoa that Afega Tai is doing the same thing as Afega Uta, insofar as the obligations expected of a village council; they hold meetings; and assist with developments of the village and in response. Taliaoa agreed.

“Then how did you come up with the conclusion the recognised village of Afega is the one you serve in?” asked Lefau.

Taliaoa explained that in the beginning there is one village however the family of “Savea” broke away and created their own village council; there were efforts for reconciliation but they never eventuated.

Lefau questioned Taliaoa about his sworn affidavit which says an L.T.C. a decision in 2014 indicated that their village council is recognised and acknowledged over the second village council.

Lefau then asked Taliaoa if he wanted to reconsider his evidence before reading out the decision of the L.T.C. cited in his affidavit.

Taliaoa replied: “No, my response is the same.”

The village mayor then read out the relevant part of the L.T.C. decision in 2014. It does not mention that Afega Uta is the recognised village.

He was asked which part of the decision in question refers to Afega Uta as the recognised village, but Taliaoa was silent.

The defence lawyer proceeded to question Taliaoa on his duties as an appointed village mayor; to serve the people of Afega regardless of which village council they serve.

Lefau asked Taliaoa why he didn’t question the Secretary of the Afega Tai village council to confirm that Fata Meafou had rendered monotaga as required.

Leavai objected to the query, but Justice Lesatele allowed the question.

“As I said, I cannot go and question [those] people,” said Taliaoa.

Another issue raised by Lefau was that when Afega Uta conduct its chiefly title bestowments, afterwards they are registered with the L.T.C. registrar and accepted.

That is the same process followed when it comes to Afega Tai.

At the end of Taliaoa’s testimony, Justice Lesatele asked the village mayor: “If Fata Meafou had served in the [Afega] Uta village council, would you have endorsed his election nomination?