There are traces of E. coli bacteria in every waterway in Upolu, suggesting widespread sanitation issues across the country, data in a new report reveals.

The report, Biosecurity of Upolu Fresh and Salt Environmental Water Resources, was published jointly by New York University in New York and Abu Dhabi, the Ministry of Natural Resources and Environment (M.N.R.E.) and the National University of Samoa (N.U.S.), under a partnership facilitated by the United Nations Development Programme in Samoa.

It shows that E. coli was found in every one of the 219 water samples taken from around Upolu in December, which will be affecting human health, environmental degradation and harming the coral reef.

In freshwater samples, the family of bacteria where E. coli belongs made up around ten per cent of all bacteria recovered from water samples.

“We found a consistent distribution of total coliform and fecal E. coli in rivers, lakes and inshore reefs,” the research team writes.

“All freshwater samples contained coliforms and pathogenic fecal-derived E. coli, which are main culprits of disease.

“Each seawater sample tested also tested positive for either coliform or E. coli, which are often a result of water run-off, wastewater discharge or due to near-shore human activities.”

A map of where fecal E. coli and coliform were identified in the paper reveals clusters of fecal E. coli around the Apia urban area, across Cross Island Road, much of the north eastern and south eastern coast and a cluster between Falelatai and Faleaseela. 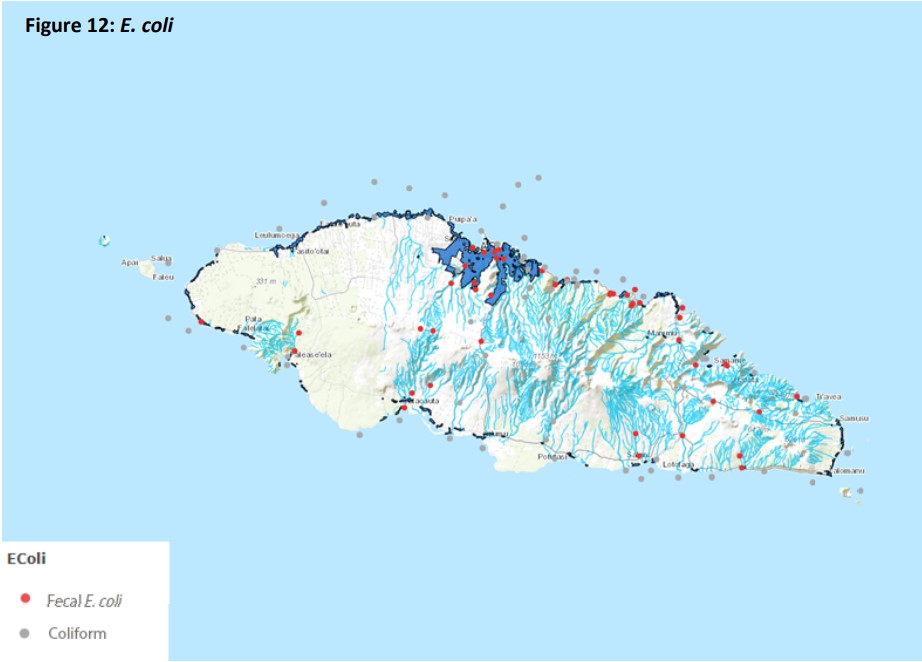 Speaking to the Samoa Observer on Sunday, project leader and report co-author Dr. Gary Goldstein said he is alarmed by the findings, and hopes changes can be made to improve the water in Samoa.

“It is definitely something that needs to be taken care of,” he said. “The water is not safe and it’s not clean anymore.”

The water was tested using a Colilert 18 (IDEXX, US) testing kit, which is U.S. E.P.A. approved. It can detect a single pathogenic bacterial cell 100 millilitres of water.

In their report the researchers call for better sanitation practices, environmental monitoring to keep track of the pathogens and for better waste management.

Based on the research, a second paper has been published in the scientific journal Molecules with the analysis of the elemental composition of the water samples. The paper was published at the end of October.

In the paper, a table outlines geographic areas that need urgent or critical attention. Apia and the Vailima/Vaisigano river are listed as needing “extreme” mitigation, while Falefa, Vavau, Satalo, Lalomanu, Samatau, Letogo, Faleula and Taelafaga villages all require “urgent” mitigation.

A further list of villages and their rivers either need strong or mild mitigation based on the findings in the research.

The new data comes after the Samoa Bureau of Statistics released similar findings in the preliminary results of the Samoa Demographic and Health Survey-Multiple Indicator Cluster Survey (D.H.S-M.I.C.S.) 2019-20.

This means there is a possibility that almost 50 per cent of households are at risk of contracting a waterborne disease, said freshwater ecologist Dr. Mike Joy, from the Institute for Governance and Policy Studies at Victoria University of Wellington.

Initially S.B.S. denied the high rates of E. coli across the country, saying the sample of households studied was not representative enough to speak for all of Samoa.

In August, Government Statistician Aliimuamua Malefono Taua-Taaloga said the sample of 696 households represents just two per cent of Samoa’s households. But an Assistant Professor of Policy Studies from Hong Kong University Dr. Kris Hartley said she has  “no concern” about the methodology.

“I would not expect these methods to be the source of any problematic inferences.

“The sample size is not unreasonably low given confidence levels and margins of error that are commonly accepted in statistical studies.” 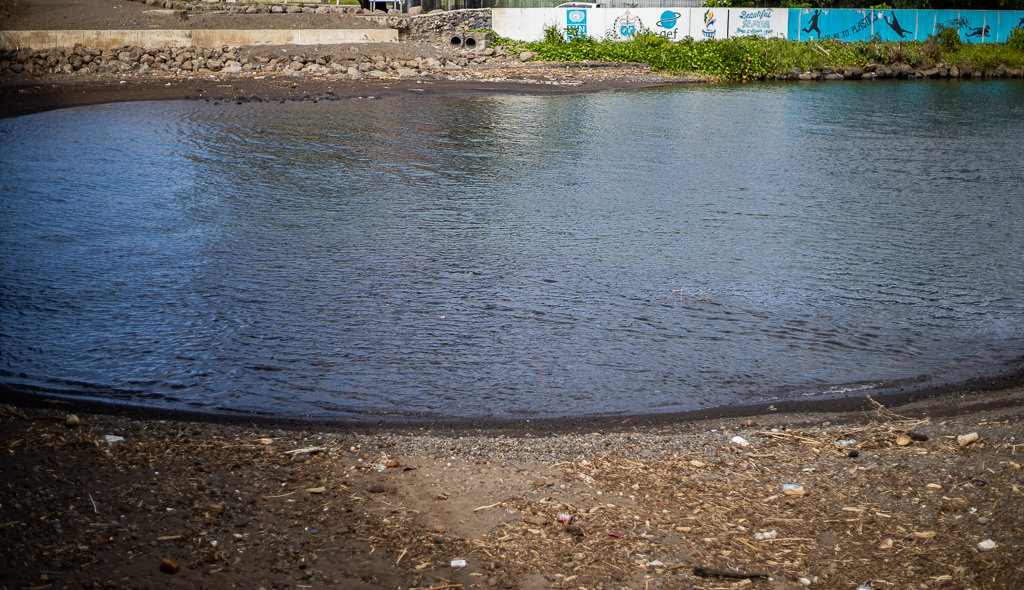 As well as E. coli, the N.Y.U researchers found significant traces of salmonella and vibrio, also of great concern to Dr. Goldstein. Vibrio infection causes diarrhoea, cramps, nausea, fever, and vomiting, among other symptoms and infections are usually associated with undercooked seafood.

“Vibrio is a real problem. It will destroy coral fairly rapidly,” Dr. Goldstein said. One of the ocean’s natural solutions to vibrio however are giant clams, whose population in Samoa is still being rebuilt.

“Vibrio causes diseases in coral and can also cause fatal diseases in humans such as cholera, gastroenteritis, wound infections and septicaemia.

“Giant clams in the South Pacific in being eaten and their numbers have dropped precipitously so nature’s natural cure has been eliminated.”

The researchers looked closely at the enteric bacteria responsible for gastrointestinal diseases, and found the most abundant one was klebsiella, which can cause pneumonia and urinary tract infections. It was found in high quantities in both freshwater and seawater samples.

A hotspot was identified off the coast of Apolima-Uta, with other areas of concern in Apia, Faleaseela and Tiavea.

Salmonella was also found in relatively high quantities, with Apolima-Uta another hotstpot.

Escherichia, where E. coli comes from was also significantly abundant in the freshwater samples but less so in the seawater, because it does not survive in marine environments.

Escherichia and Shigella, another bacterium that causes diarrhoea and bloody diarrhoea, fevers and severe stomach cramps, were found to be abundant near Tiavea, Apia, at the heights of the rivers above Apia and Laulii, and the centre of Cross Island Road.

The research also identified specific hotspots where several concerning enteric bacteria are most common, but did not name these in the report.

“The near universal distribution of enteric bacteria throughout sampling sites from both fresh and seawater and using two independent methods suggests a general sanitation problem around the island.

“Pathogenic enteric bacteria, such as E. coli, Klebsiella and Salmonella are widely distributed around Upolu Island likely because of inadequate sanitation and are implicated in environmental degradation, human disease, and stress and mortality to corals,” the researchers say.

“The prevalence of these bacteria in most samples poses severe health hazards to people if freshwater is ingested.

“In the marine environment, recreational and economic activities such as swimming and shellfish industry may suffer in the future if these bacteria increase further in abundance.

“This is particularly important during periods of hot weather, as increased temperatures tend to increase the abundance and activities of these pathogens.” 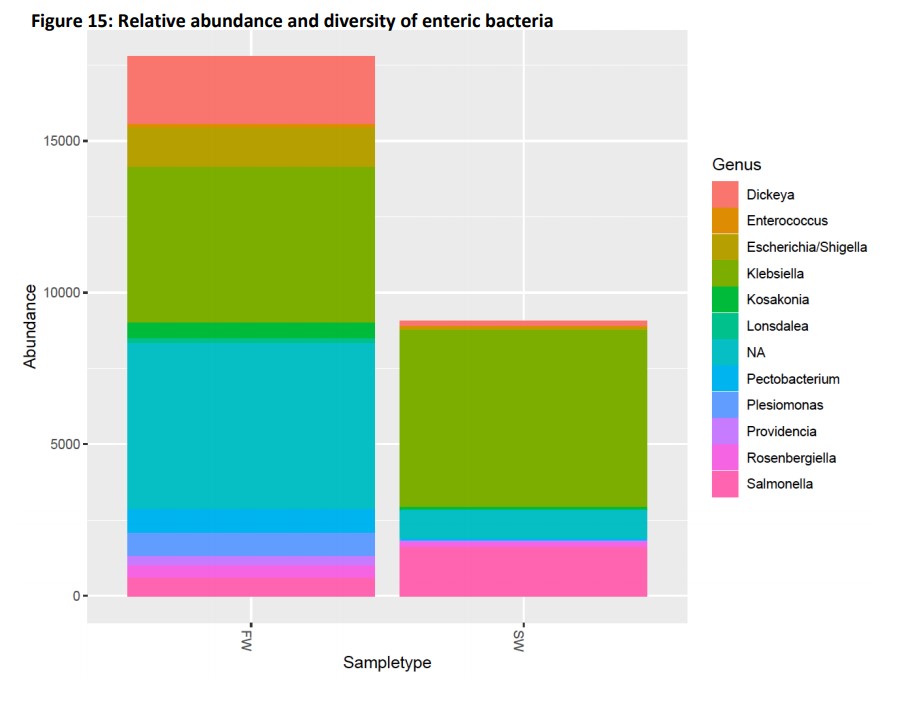 They also took water samples of rainwater and bottled water. Using highly advanced mass spectrometry technology, they tested those samples at the Abu Dhabi and New York N.Y.U. campuses and at N.U.S.

As well as fresh and seawater samples they also studied the mangrove swamps around some of the river ways.