A child with relatives unable to cross the Nuusuatia crossing because they came in a car. (Photo: Vaitogi A. Matafeo)

One of the most affected areas by flooding was the Nu'usuatia ford which was completely destroyed on Friday. Motorists and pedestrians were not able to cross the ford due to its inaccessibility. 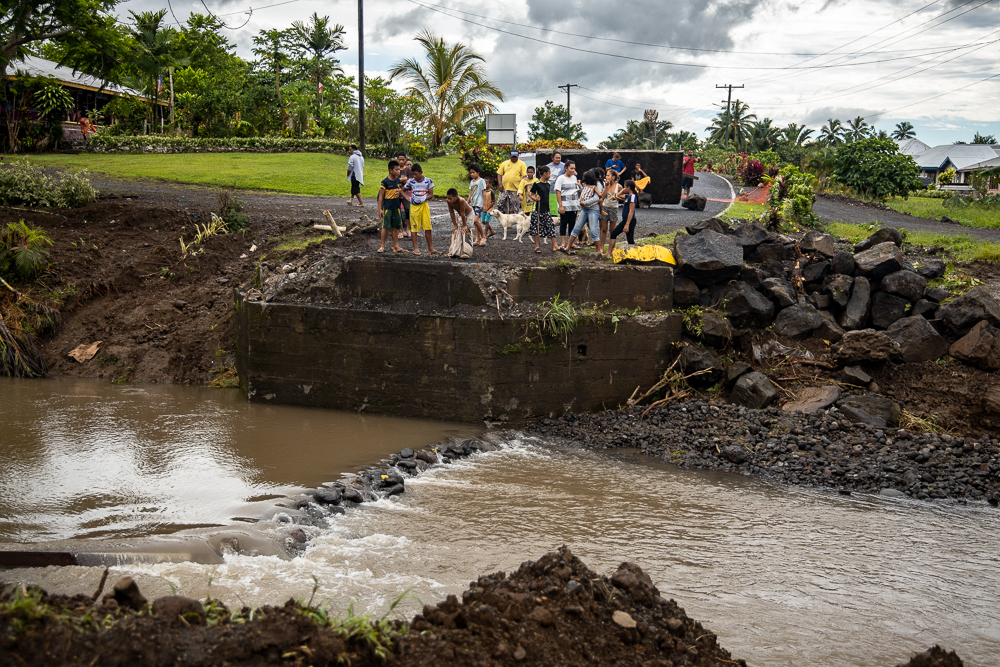 On Saturday morning, the Land Transport Authority [L.T.A.] provided an update on their Facebook page, stating that contractors are working to restore access as soon as possible.

A temporary concrete pass way was built across the flooded ford to enable villagers to cross.

A motorists who was travelling from Sa'anapu to town expressed frustration at not being able to cross.

Father of four, Tomasi Eletise, told this newspaper that he was driving with his family to go shopping and had no choice but to detour. 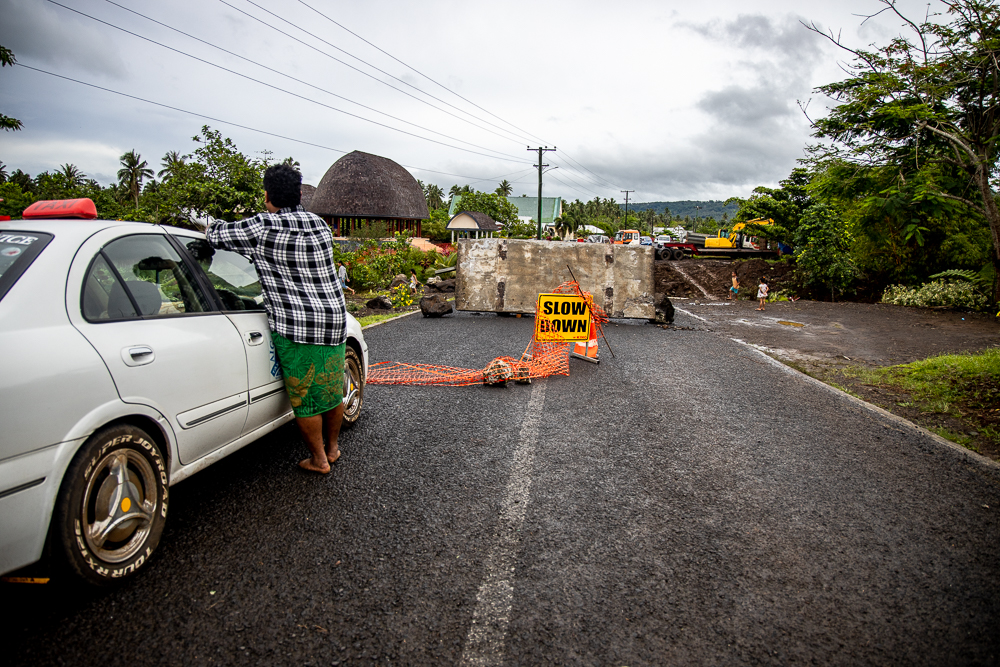 “I am very disappointed that this road is not safe to cross but this is the first time have heard of it because we are not from here,” he said.

The 63-year-old also added that he hopes the construction work will be completed soon so they can use the road again.

A Nuusutia villager, Peniamina Lena, said that due to the shut road they had to carry their supplies across the small crossing that was made. 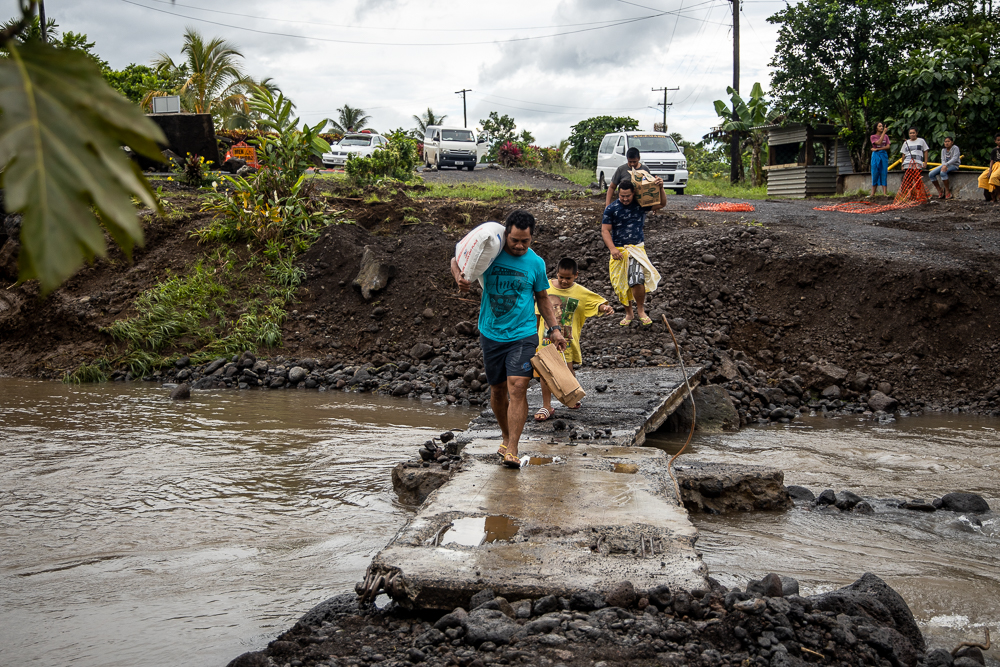 “I admit it does not look safe but I guess when it comes to heavy rain and flooding that is something none of us can control.

“We just pray no one is harmed along the way.”

In other areas such as Mulivai and Safata, the Samoa Emergency and Fire Services Authority [S.E.F.A.] were called on Friday to assist members of the public trying to get their families to cross. They were also assisted by staff from the Disaster Management Office. 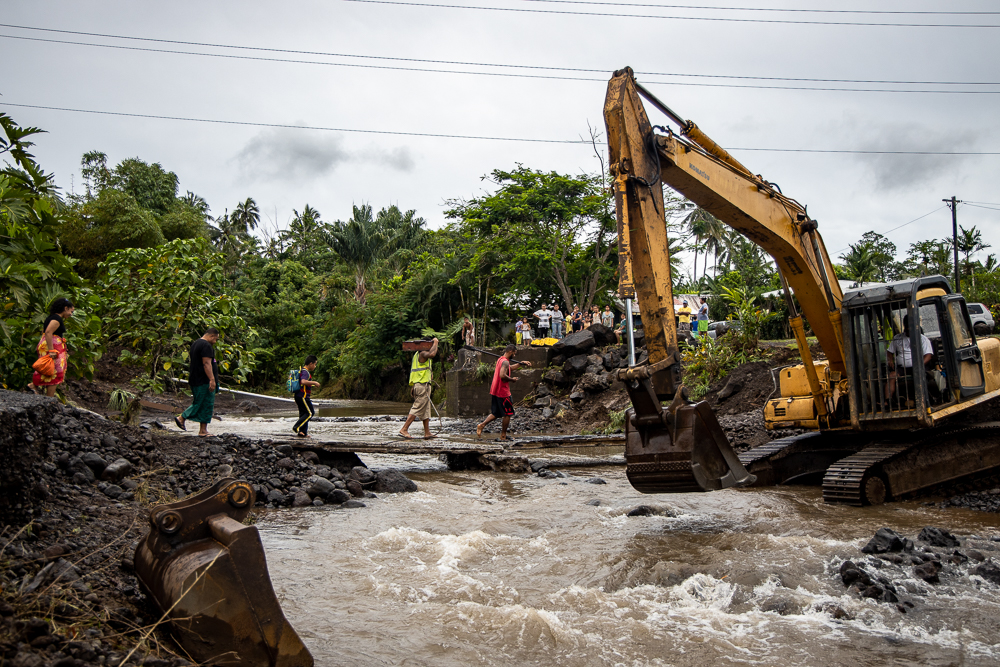 The S.E.F.A. also urged the public and residents on this side of the country to stay vigilant as more heavy rain is expected.

The National Emergency Operations Centre [N.E.O.C.] advised members of the Public in a Facebook post on Friday that five roads and areas were closed until further notice due to flooding caused by heavy rain.

The public were also advised to be extra cautious when driving down the Cross Island Road and precautionary measures have been put in place for the safety of the general public.

While the flood advisory still remains for northern and western rivers, the public has been asked to stay vigilant and cautious while the convergence zone still remains in the vicinity of the country bringing Heavy rains and Flooding.

The bad weather is due to an active convergence zone that lies within the vicinity of Samoa, consequently triggering associated rain, thunderstorms and gusty winds.

The outlook projected that Samoa is likely to between zero to one topical cyclone this season, which is likely to pass the 400km radius of Samoa with the possibility that it may reach Category 3 status or greater.

The cyclone risk for Samoa this season compared to all tropical cyclone season is 'normal'.

Furthermore, the S.M.S. outlook stated that the La Nina phase of El Nino Southern Oscillation [E.N.S.O.] is well established in the Pacific since October with the anticipation to continue until at least early 2021 after a peak period in December this year.

Above average rainfall is most likely for Samoa in the upcoming season, the S.M.S. outlook further projects.

The tropical season of Samoa extends from November to April with the peak period normally experienced between January to March.

This upcoming cyclone season is expected to emulate past cyclone seasons that have similar background climate conditions to the present [2020/2021].

At present, the sea surface temperatures across the central equatorial region and eastern region are cooler [negative] than normal while a warm [positive] pool of water developed in the western region to the north of Papua New Guinea.

The La Nina is expected to remain throughout at least early 2021 after it peaks in December 2020. The strength of the event is anticipated to become stronger with similar conditions to the 2010-11 events.

La Nina normally provides more rainfall than usual for Samoa. In light of this, wetter than normal conditions are expected for the island as it transition into the Wet Season coupled by the La Nina. Therefore, 'above average' rainfall is favored for Samoa in the coming season.

In addition, there is a high possibility for potential landslides and river flashing this coming wet season especially when a tropical cyclone follows a prolonged period of wetter than normal conditions.

These events can cause a great deal of damage to property and lives. The S.M.S. said it will continue to closely monitor the change in the climate system and advise accordingly.

All communities are urged to remain vigilant, be alert and prepared throughout the 2020-21 tropical cyclone season and take heed to alerts, warnings and advisories whenever it is issued to reduce the loss of life and damage to property.

Samoan sailors stranded in the United States have been informed that the remaining repatriation flights for 2020 have been canceled. The development was revealed in a letter dated 30 November 2020 from the Mediterranean Shipping Company (M.S.C.).

Retailers across town are taking steps to mitigate any spread of disease as Samoa continues under Alert Level 1 this week.