Samoa remains among the world’s youngest countries with half its population under 21 but the number of people of working age is growing, a snapshot of the nation’s population shows.

The changing nature of Samoa’s demographics is highlighted in a Government monograph: “Samoa Gender Dynamics Monograph” issued by the Samoa Bureau of Statistics.

The report compares data from the 2006 and 2016 national census data and finds that Samoa’s population pyramid is moving away from a baby boomer dominated population structure.

Instead, the report finds that Samoa’s population is moving towards a population dominated by people of working age.

“The proportion of the population at the youngest ages is decreasing while the proportion at older ages is increasing,” the report found.

“This reflects a trend of declining fertility over the years in Samoa [... and] is a positive trend - Samoa needs to lessen its dependency population (young and old aged persons) and increase its working population in the middle-aged groups.” 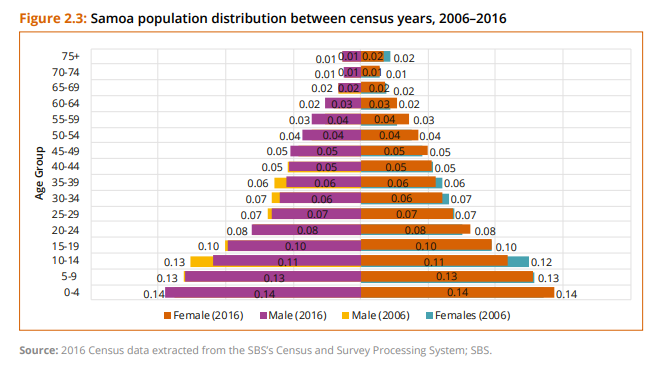 The report is primarily focused on a detailed analysis of the differences between the country’s female and male population.

Despite these demographic changes some 38 per cent of the country’s population is under the age of 14, the report found.

The report finds that half of Samoa’s population is composed of children, adolescents and emerging young people of the age to be enrolled in formal education, from primary to tertiary level.

The report finds that non-completion of education, especially among adolescent females, is having direct implications on teenage fertility.

Studies have shown that declines in adolescent fertility are strongly associated with girls’ increased secondary school enrolment. Greater education of a country’s female population leads to delayed fertility and reproduction.

Samoa’s teenage fertility rate is broadly dropping, the report found, and in 2016 stood at 31 pregnancies among 1000 women aged between 15 and 19.

Access to adolescent and youth-friendly sexual and reproductive health services and information is crucial to help girls avoid unintended pregnancies and achieve their educational goals, the report found. 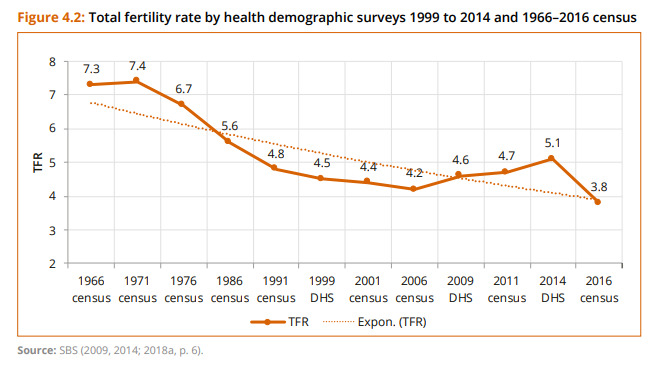 Strategies to improve young women’s educational attainment should therefore recognise the dual relationship between health and education, the Bureau found.

Samoa has four levels of education: Early Childhood Education, kindergarten or pre-school (three to five-years-old); primary school (Years 1 to 8); secondary school and college (Years 9 to 13); and tertiary (and additional two to six years of post-secondary or higher education).

School education is compulsory under the Samoa Education Act 2009; all children between the ages of four to 16 are required to attend school.

But a total of 11,807 children (or 7 per cent of the 179,052 population aged three and above) have never attended school, with more males not attending school than females.

This means that more females attend school despite Samoa’s overall male-dominated population. The variation in school attendance between urban and rural areas is slight at one per cent.

The north-west region of Upolu - the most populated in the nation - registers a school attendance rate that is one per cent lower than the rest of the regions in Upolu and Savai’i, and a corresponding higher number of persons who have never attended school.

Peak attendance rates for both sexes reach 90 per cent between the ages of six to 14.

The highest school non-attendance rates are among those aged three to five years; absenteeism also increases for those aged 15 years or more, when attendance is no longer compulsory.

A total of 902 children aged between six to 14 year were not attending school at the time of the last census, more than 60 per cent of which were boys and nearly 40 per cent were girls.

The urban-rural gap for school absenteeism has widened with more than 80 per cent of school-aged children in rural areas not attending school compared to only 18 per cent and less in urban areas.

Secondary completion rate is higher for females than males in Samoa; nevertheless, education participation for young married women and young women with children is lower compared to unmarried young females and those without children.

Literacy levels vary slightly by sex and age and start to decline among older demographics.

But that gap reverses for tertiary and postgraduate education.

Males who do stay in school are more likely to attend tertiary education and achieve graduate and postgraduate certificates, Master’s degrees and doctorates.