Members of the judiciary have paid their last respects to a former senior Judge, Justice Vaepule Alo Vaemoa Vaai, who was described as a champion and faithful servant of the bench.

In memory of the late Justice Vaepule, the Ministry of Justice Courts and Administration and Judges of all Courts held a special sitting at Mulinu’u on Thursday, to pay tribute to their colleague.

Justice Vaepule died in New Zealand two weeks ago after a battle with cancer.

He is survived by his wife Letuimanu’asina Dr. Emma Kruse Vaai, five children and six grandchildren.

In honour of Justice Vaepule’s battle with cancer, some of the Judges of the Court wore pink and pink ribbons were also distributed to everyone who attended the special sitting.

The special sitting was live streamed to enable the family of Vaepule, who are overseas as well as Australian-based Court of Appeal Judges Justice Robert Fisher and Justice Lautalatoa Pierre Slicer, to be part of the service.

From the village of Vaisala Savai’i, Justice Vaepule is the son of the former Prime Minister of Samoa, Vaai Kolone and Fotuosamoa Toma.

Justice Vui Clarence Nelson paid tribute to Justice Vaepule who was not only a colleague but a close friend.

He described Justice Vaepule as a calming influence during times of turbulence and stress and was a mentor to many of the younger Judges.

“[He was] a friend to all and one to apply the law with commonsense even if the law says something else,” said Justice Vui.

In remembering Justice Vaepule, he said the former Justice had a wicked sense of humour that might have explained why they are close and their friendship lasted over 40 years.

He recalled when a lawyer from the Attorney General’s Office had disagreed with Justice Vaepule and had demanded a written decision.

In response, he said, Justice Vaepule told the lawyer that he will read out his ruling slowly “and you will write it down then you’ll have it in writing”.

“This is not to say that he couldn’t write because he was well known to all the lawyers for his penmanship,” said Justice Vui.

“The lawyer was speaking too fast, and he slowly put down his glasses like this and told the lawyer - counsel can you see this, it’s called a pen. 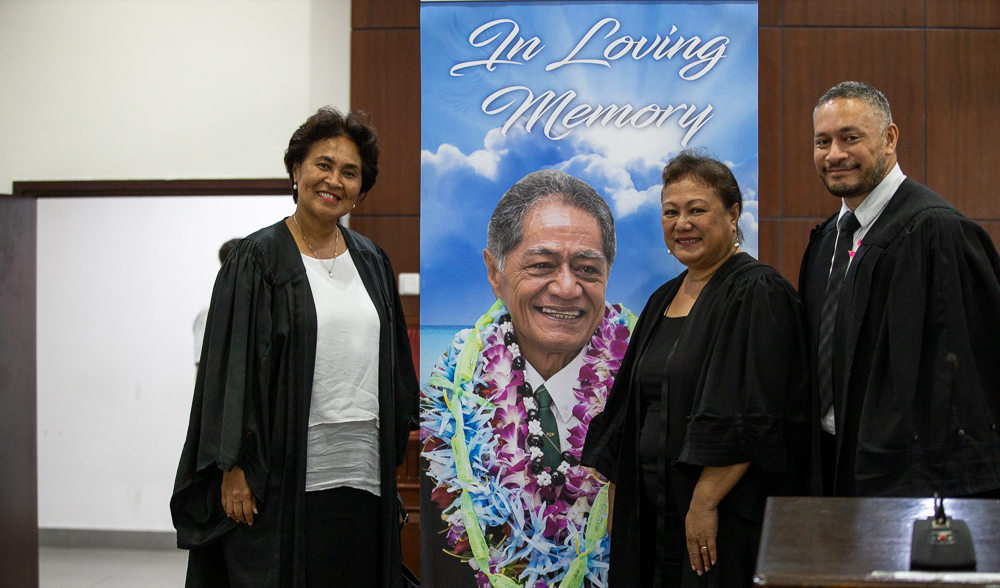 Justice Vui also remembered when new District Court Judges sought advice from him and Justice Vaepule on something tricky they encountered.

He said he listened to them and gave them the benefit of his many years of experience.

“And then they would go to Vaepule and the first question from Vaepule is did you ask Vui,” he recalled.

“[When the response is] Yes then you do exactly what you want to do.”

One of the many things the judiciary miss about Justice Vaepule is his smile, said Justice Vui.

“That broad never ending smile well known to all of us,” he said.

“That could mean malo for a job well done or it could mean you just keep on going and going counsel with that ridiculous submission and keep digging that hole deeper and deeper.” 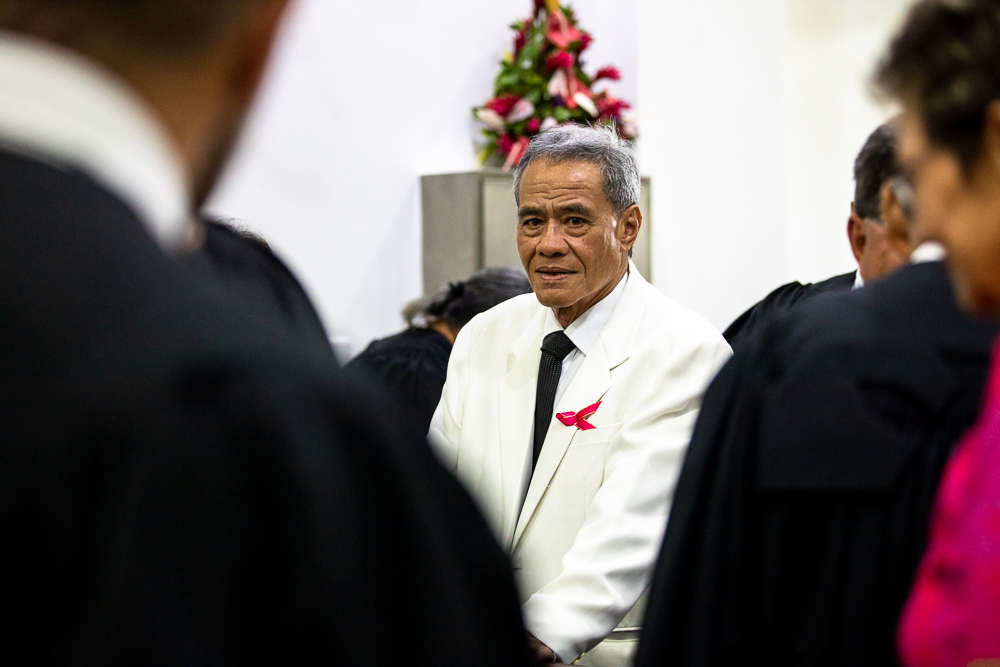 Justice Vui said the passing of his friend is not only felt by the Civil and Criminal Court, but also by his colleagues in the Land and Titles Court.

He said the L.T.C. Court was very dear to Justice Vaepule’s heart.

“He understood the importance of that Court,” he added.

“He, like many of us believed that for real change to be heard it had to be sustained.

“This meant a change from within because you can reshape an institution as much as you like, but if it’s not accompanied by changing the hearts, the minds, the habits of many years of those who serve within then all is forgotten.”

Furthermore, he said this process of training and upskilling Judges and support staff is a testament of Justice Vaepule’s dedication and commitment. 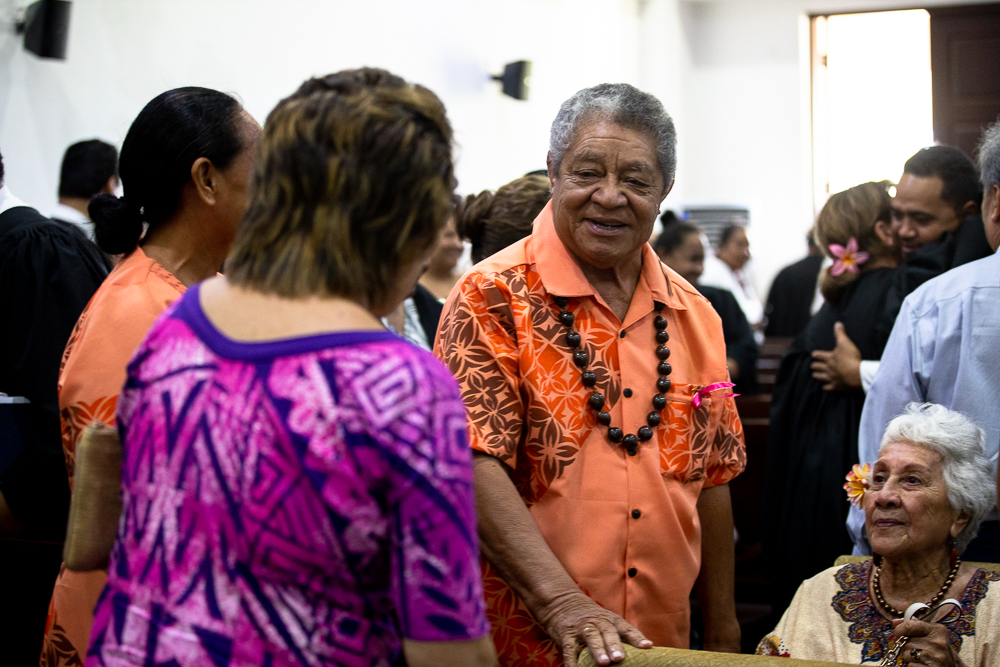 Justice Vui said the former Justice spent a lot of his time and energy pushing for the wellbeing of the L.T.C. and such work should be continued by the President and the new judiciary administration.

On behalf of the Acting Chief Justice and Judges of all the Courts and Ministry of Justice, he extended his condolences to Letuimanu’asina and family.

She remembered the former Justice as a man of few words who was not boastful of his knowledge in law.

Savalenoa pointed out that Justice Vaepule served the private sector through the Vaai & Vaai Law firm, and served the Government through his work in the Public Trust and the National Provident Fund.

“He served the country through his work in the Land and Titles Court, the District Court, the Supreme Court and the Court of Appeal,” she added. 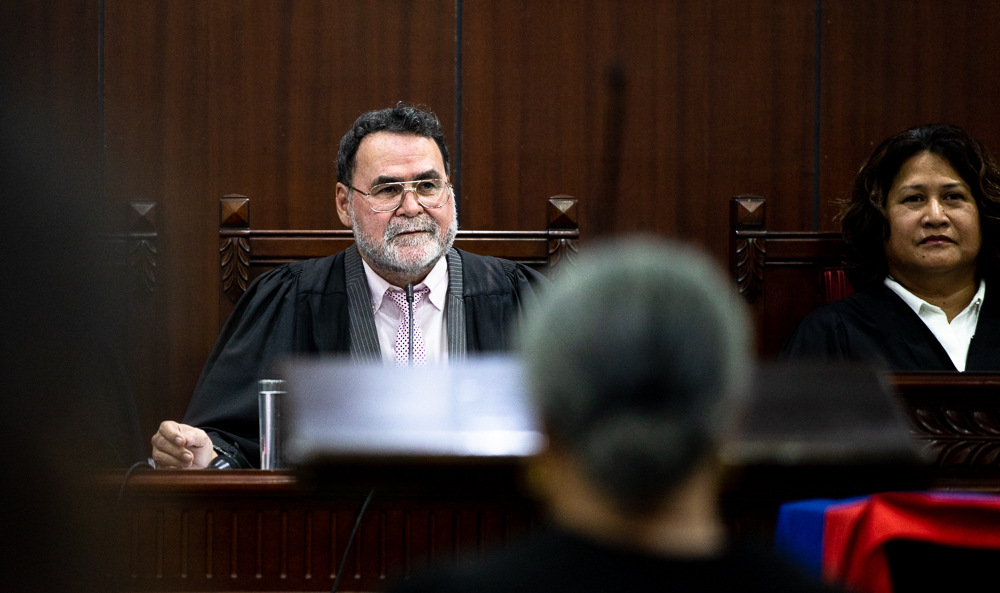 Justice Vaepule was a solicitor in the N.P.F. and was the Public Trustee of Samoa before he was called to serve in the judiciary.

The President of the Samoa Law Society, Leiataualesa Komisi Koria also spoke during the special sitting.

Making reference to the sermon that Father Eteuati Vui Lapa gave, which described Justice Vaepule as a faithful servant, Leiataualesa said Justice Vaepule was a man who worked diligently in whatever area of responsibility he was given, with honesty and humility.

Although he did not observe Justice Vaepule as a practicing solicitor, he said he has reviewed old files that were kept by His Honour when he was a Public Trustee.

“I have always been struck by the quality of his file keeping and the careful precision with which he recorded the history of every event on a file,” said the President.

“One can be inspired just by seeing the level of care and attention a person puts into their work.

“For me, Justice Vaai was one such person.”

Justice Vaepule was also remembered for his tireless work in the District Court, known as the “coalface” for some 12 years, before he was elevated to the Supreme Court.

The President said Justice Vaepule presided over a series of very high profile criminal cases in the District Court.

Those cases, he said, required the late Justice to preside as Judge over a sitting Cabinet Minister, two Members of Parliament, a senior lawyer, two high profile police officers and other prominent members of the community.

“All of them were widely reported in the media and subject of heavy public scrutiny,” said Leiataualesa.

“His Honour’s written decision in each of those cases was, in typical Justice Vaai fashion, careful, considered and well balanced with meticulous attention to detail.

“Every single one of those cases demonstrates the value and importance of having judges who can carry their functions independently, handing down decisions without fear or favour.”

Lastly, the President said that Samoa has lost an irreplaceable fountain of wisdom and knowledge in Justice Vaepule.

“His Honour will be sorely missed but well remembered for his humility and grace, his endless good humour, his quiet diligence and for the care and respect with which he approached his calling.” 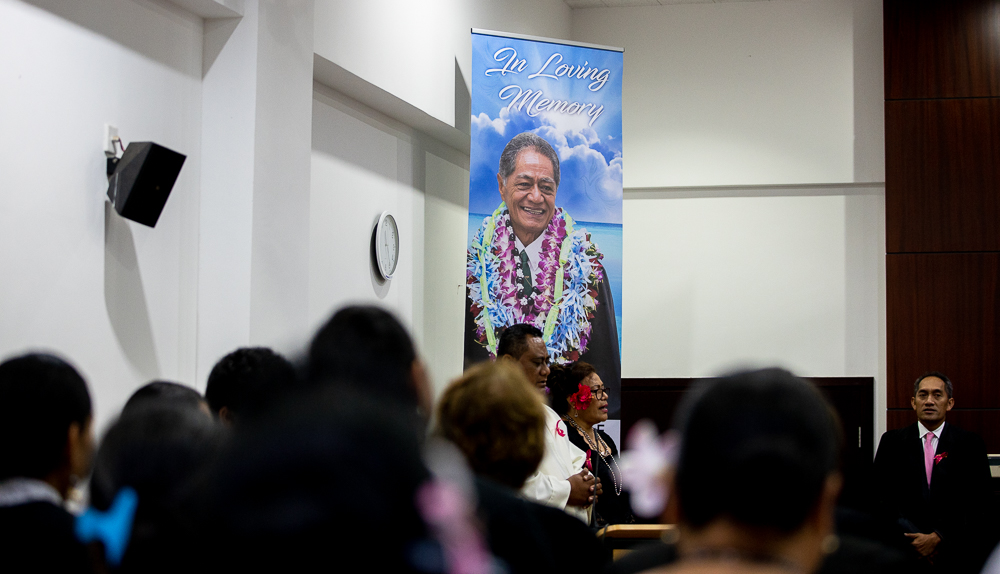 Justice Vaepule served the legal profession for 37 years with most of those years spent in the public service.

He attended Vaisala Primary School and Leififi Intermediate before he left for studies in Wellington, New Zealand.

He holds a Bachelor of Law and Bachelor of Commerce and Administration from Victoria University of Wellington.

He returned to Samoa following his studies and began his service in N.P.F. and was the Public Trustee of Samoa before he was sworn in as a judge.