The meeting was co-chaired by Japan's Minister for Foreign Affairs, Toshimitsu Motegi, and Simon Kofe, the Minister of Justice, Communications and Foreign Affairs of Tuvalu. 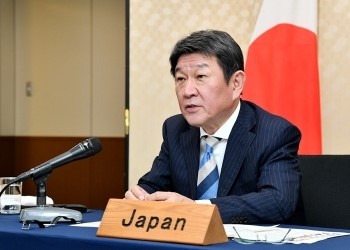 This was highlighted in a media release issued by the Embassy of Japan in Samoa.

Minister Motegi explained that since the 8th Pacific Leaders Meeting (PALM8), Japan has strengthened its cooperation with Pacific Island countries in order to realize a “Free and Open Indo-Pacific”.

Minister Motegi also provided examples of the progress of Japan’s commitments made at P.A.L.M.8 and stated that Japan would continue to provide assistance and promote human resource development and people-to-people exchanges based on the needs of Pacific Island countries.

He also made special mention of the fact that Japan had provided medical supplies, equipment and technical support to Pacific Island countries, which have been significantly affected by the COVID-19 pandemic.

In response, the Pacific Islands Forum (P.I.F.) members expressed deep appreciation for Japan’s steady implementation of its commitments and provision of assistance to Pacific Island countries in the areas of the pillars of cooperation expressed in P.A.L.M.8: free, open and sustainable maritime order, resilient and sustainable development and human resource development, and people-to-people exchange.

The Ministers also exchanged views on cooperation in international fora, including issues related to North Korea, and shared the intent for continued close coordination between Japan and Pacific Island countries.

In connection, Minister Motegi sought continued understanding and cooperation for the early resolution of the abductions issue.

The Ministers exchanged views on the vision and priorities for P.A.L.M.9, to be held in 2021, and confirmed continued close cooperation toward the successful meeting.

The Chairs’ Summary stated that the Ministers reaffirmed the importance of a free, open, and sustainable maritime order based on the rule of law in the Pacific that will contribute to peace, stability, resilience and prosperity of the region.

Minister Motegi explained that as part of Japan’s commitment made at PALM8, Japan provided capacity building in maritime security and safety such as through the dispatch of both short-term and long-term experts, including Japan Coast Guard Mobile Cooperation Team, provision of maritime safety equipment, training to address Illegal, Unreported and Unregulated (I.U.U.) fishing, and workshops on maritime law enforcement at the University of the South Pacific.

Japan also provided cooperation in marine resource management and environment preservation and support for addressing oil leak from sunken ships. The Ministers welcomed continued cooperation on the sustainable use of fisheries resources in the Pacific, such as through mutually beneficial fishing arrangements, noting the P.I.F. Members’ commitment to implement zone based management within their Exclusive Economic Zones (E.E.Z.) in accordance with international law including the United Nations Convention on the Law of the Sea (U.N.C.L.O.S.) to ensure the sustainable management of fisheries.

The P.I.F. Ministers reiterated the P.A.L.M.8 commitment to the sustainable development, management and conservation of the ocean and its resources. In this regard, they highlighted progress on regional priorities including: working collectively to ensure maritime zones are secure and cannot be challenged or reduced as a result of sea-level rise and climate change; protecting the ocean from harmful plastics and threats posed by the presence of nuclear waste, radioactive and other contaminants; ensuring the long-term sustainability and economic viability of the region’s fisheries resources; and ensuring that a robust, effective, and ambitious international legally binding agreement under U.N.C.L.O.S. on the conservation and sustainable use of marine biological diversity of areas beyond national jurisdiction is finalised and adopted.

Data released by the Ministry of Health show over 21,000 people have been fully vaccinated with the Oxford AstraZeneca COVID-19 vaccine.