The Samoa Cancer Society will be hosting events throughout Pinktober in order to raise awareness on the dangers of breast cancer.

This was confirmed by the Chief Executive Officer of the Samoa Cancer Society, Su'a John Ryan, in an interview with Samoa Observer on Thursday.

He said there are many women in the community who know very little about breast cancer and they are keen to raise awareness on the disease in the rural and urban communities, in a bid to encourage women to do self-examination and to see a doctor if they suspect anything wrong.

Su'a revealed that they got approval from the Land Transport Authority [L.T.A.] to light up the new Vaisigano Bridge with the colour pink, which they hope will done this weekend.

He said it will be something new and will be part of Pinktober celebrations, while acknowledging the financial support of Pacific Fiduciaries which gave approval for the Society to run various activities throughout Pinktober.

"We do have a couple of big events coming up. Later on this month we are going to be hosting the S.S.A.B. [Samoa Stationery and Books] Mother Daughter Lunch, where we are going to bring together the key female leaders in our community and they can change agents or change leaders and information distributors on breast cancer,” he said. 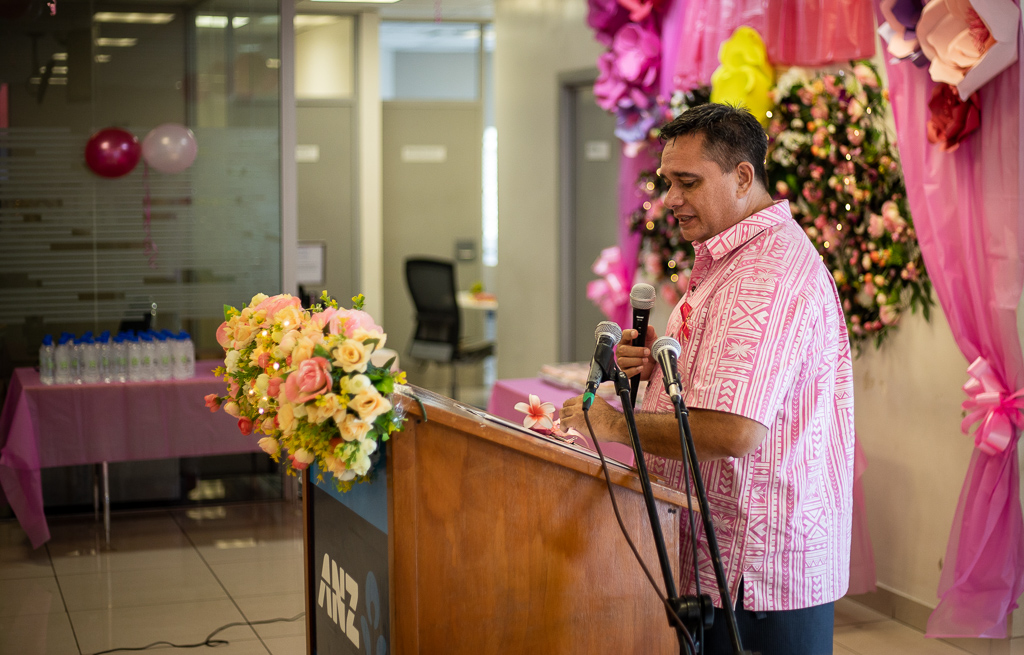 He explained that they thought it will be great to bring together two generations of women, who are current and future leaders.

Su'a further stated that they are working in conjunction with Vodafone Samoa, and they will roll out a couple of "exciting products" which will be directly connected to the Society and Pinktober.

The final activity for Pinktober will be the "Talanoa Walk" where they will walk through the town area and encourage people to have conversations focusing on breast cancer awareness.

According to Su'a, this year 18 people survived breast cancer, though 13 remain in palliative care. Out of the 14 people had already had a mastectomy operation, having tried to treat their breast cancer already.

Nine patients had their cancer detected in the earlier stages of the disease. There are nine cases between the ages of 20-40 while 22 cases are between 40-80 years of age.

The message they are trying to share through their "Vave Campaign" is early detection, quickly see a doctor and quickly call the Society.

According to him, they can provide a roadmap or assistance in dealing with cancer.

“We recommend that every woman should see a doctor at least once a year for proper examination and if they do suspect anything, don’t delay it, the earlier they get in to seek medical help, the higher the chances of a successful medical intervention,” he said.

"The longer they leave it, the worse the outcome is."

Su'a appealed to the public to wear pink throughout the month of October to show support and raise awareness on breast cancer.