Ms. Ah Young acknowledged the support of N.U.S Biology Lecturer, Roberta Mura Fa'asavalu and the S.C.S Project Coordinator, Dave Chung who have been offering them support and encouragement from the beginning. (Photo: Francis Fa'alili)

They also want to target issues such as waste and pollution, which led the group to host a waste audit at the N.U.S campus on Saturday morning.

The club is currently working in partnership with the Samoa Conservation Society (S.C.S) and the University's Faculty of Science (F.O.S) and has 27 members.

The Lanulau'ava Student Association's President, Grace Ah Young told the Samoa Observer in an interview that they wanted to target an issue that they saw at N.U.S which was the management of waste and pollution and they had targeted N.U.S because they are students and it is their everyday environment which led to a waste audit being held at N.U.S in collaboration with the Samoa Recycling & Waste Management Association (S.R.W.M.A) on Saturday.

“We are holding a waste audit on campus, we are going to do a cleaning of the grounds and then going to audit exactly what we find. This is good because it's important for students to see what exactly where their waste goes and how much waste they are producing,” Ms. Ah Young stated in an interview.

She explained that due with the hundreds of students at the University the impact from waste will build and what they are currently doing is informing their members about the situation and showing them that pollution and waste is actually a big problem in Samoa and N.U.S.

Ms. Ah Young acknowledged the support of N.U.S Biology Lecturer, Roberta Mura Fa'asavalu and the S.C.S Project Coordinator, Dave Chung who have been offering them support and encouragement from the beginning.

Ms. Ah Young who is also a Greenlivelihoods Trainer has background experience in waste auditing when she had taken part in the Samoa Pacific Games Greening of the Games Programme last year in collaboration with the Secretariat of the Regional Environmental Programme (S.P.R.E.P) and the Ministry of Natural Resources and Environment (M.N.R.E), which had inspired the waste audit at N.U.S on Saturday. 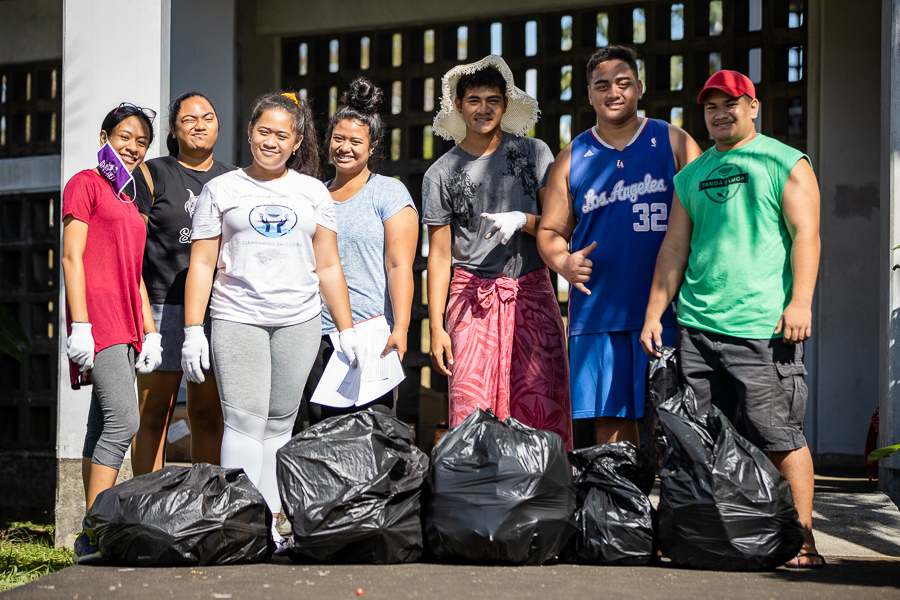 The Biology class from N.U.S took part in the Greening of the Games where they had to waste audit all of the waste that was collected during the games from different stations such as Samoa College, Faleula and Apia Park.

“Since last year, I feel like that experience alone really opened my eyes to how much waste is really being produced here in Samoa, though we are quite a small island,” she said.

She explained that each family produces a ton of waste but according to her if we can learn how to separate each one of them and see which one is biodegradable and non-biodegradable one and just seeing how much plastic is being produced really goes a long way.

When asked about her thoughts about conservation in Samoa she explained that while she was part of the Greenlivelihoods project as a trainer, she saw that there is a lot of traditional knowledge that we can harness from the villages.

She explained that people in the villages know about the plants and they would know better than people who are not from within the village and what they had try to do is to teach them cutting trees isn't right and what Greenlivelihoods was trying to tap into is that instead of destroying our environment for money, we can instead use our environment to find sustainable ways of earning money by finding green jobs that help the environment such as Eco-tourism.

N.U.S Biology Lecturer, Roberta Mura Faasavalu told the Samoa Observer in an interview that she expects people joining The Lanulau'ava Student Association to be very enthusiastic but according to her there will be a "period of decrease" until the group reaches stability possibly within the new year next year.

"I can see that if the current executive will remain the same then there is much hope for the future and there is scope for them to get involved in other government and university projects as well as N.G.Os (Non-Governmental Organisations) such as Samoa Conservation Society, possibly Conservation International," Mrs. Fa'asavalu said.

She explained that there is much work that needs to be done and that perseverance is very important.

Ms. Ah Young added that they hope by next year they would be able to begin programmes in Colleges and possibly working together with other organisations such as the Samoa Voyaging Society.