Assistant Chief Executive Officer for the Ministry of Justice and Courts Administration Ve’atauia Faatasi Puleiata has retired after being a public servant for 30 years. (Photo: Aufai Areta Areta )

Top Ministry of Justice and Courts Administration official, Ve’atauia Faatasi Puleiata, has retired from the public service after 30 years.

Entering the Ministry as a court officer in 1990 and making his way up to become the Assistant Chief Executive Officer in 2016, Ve’atauia told the Samoa Observer that it was time to retire after clocking many years in the law and justice sector.

“The time is right to retire as I contemplate running for the upcoming election next year, but I will not get into details,” he said.

Ve’atauia – who hails from Maagiagi, Paia and Safotu – has worked under three Chief Justices and five M.J.C.A. Chief Executive Officers during his tenure in office.

“The highlight of the many years working in the Judiciary is serving alongside Justices who have retired including Justice Slicer.”

He also had other duties besides being the Ministry’s A.C.E.O. and these included marriage officer, assistant court registrar, and translator during criminal court proceedings.

“In our language, one word has countless meanings so finding the right words to use is difficult at times, and so in making my job easier, I don’t mince my translation.

“I just translate verbatim, it may sound uncomfortable at times in a full court room, given our culture, but it gets the job done.”

Working at the M.J.C.A. over the years has also had its challenges, according to Ve’atauia, which he said gave him a different perspective on life and impacted his career.

Seeing an increase in the number of domestic violence cases in court were particularly concerning, he added.

“It’s disheartening to see the young women marry young only, have children and take beatings from their spouses. It's prevalent and something should do something about it,” he said. 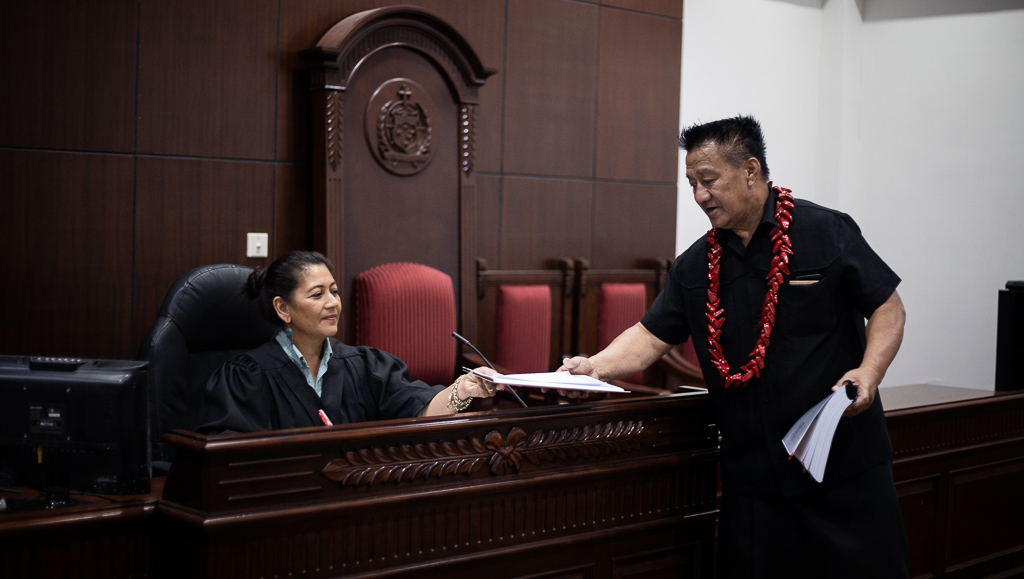 He said that a lot of young men and women are rushing into marriage without getting to really know their partners.

“I have known the deputy registrar since 1997 when I started as a young lawyer in the Office of the Attorney General.

“He put me and many other young lawyers at ease in court helping us with court procedure and process.”

Justice Tologata said Ve’atauia’s helpful nature was often disguised as an abrupt manner, which years later defined and made him a favourite among many lawyers and judges.

“As a Judge having him as my court registrar has guaranteed our combined dispensation of justice is assertive yet compassionate. I am the judge I am today in court because of his guidance.”

Justice Tologata said Ve’atauia will be missed on a daily basis by herself and other judges who have worked with him.

“He has been invaluable to the work of the court and I wish him all the best as a friend and as a judge for all his future plans.

“I am extremely thankful for his guidance, his friendship, his wit and his respect of the judiciary. He is truly irreplaceable.”

Ve’atauia is married to Vaie’e and they have two children and eight grandchildren.