The Manamea Art Studio & Gallery in Vaigaga has confirmed that it was commissioned by the Prime Minister Tuilaepa Dr. Sa'ilele Malielegaoi to recreate the world-famous artwork and is the art studio’s first religious painting.

The studio and gallery owner, Nikki Mariner, led the project with her husband Lalovai Peseta and say the painting is 5.5 metres long and 1.5 metres high.

“This project was different to other projects for a few reasons. Firstly, it is more than five metres long so it was the largest painting we've ever created. Secondly, we knew it was a formal painting for the highest office of the land and needed to be of a very high standard,” Ms Mariner told the Samoa Observer. 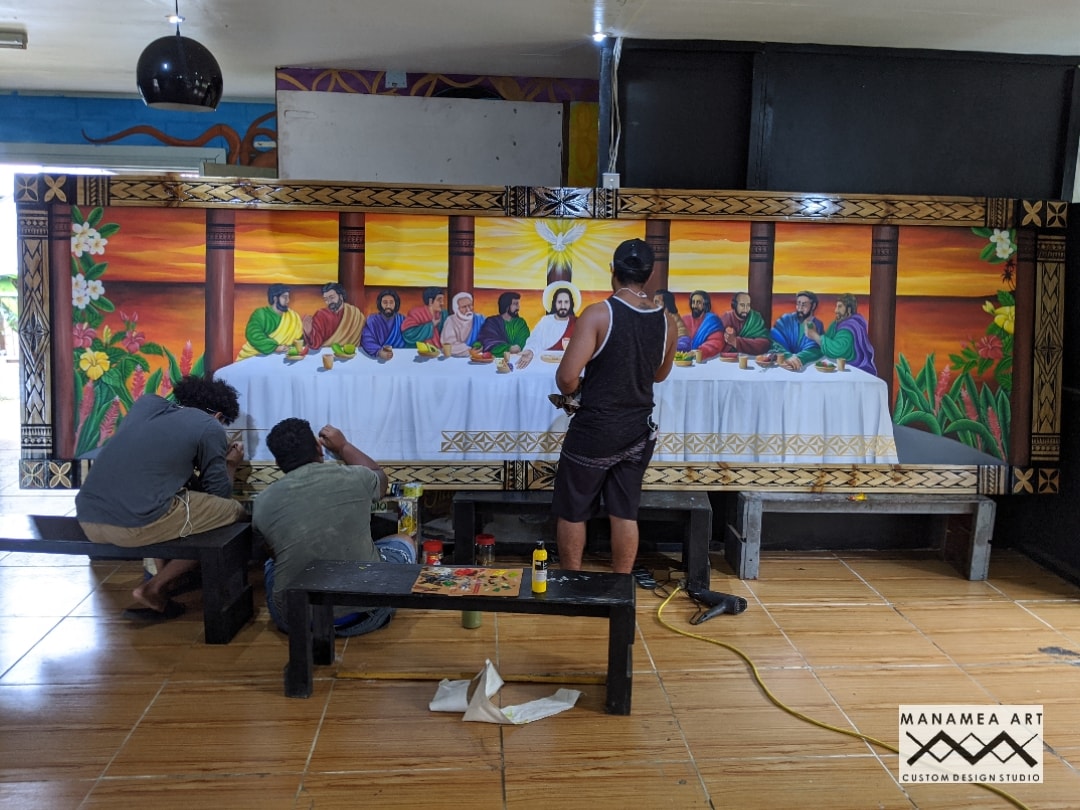 “Thirdly it was based on one of the most loved great classic artworks in history, Last Supper, by Leonardo da Vinci. Our task was to create a Samoan version. This included Samoan food on the table and Samoan flowers and plants and to put the scene inside a Samoan fale.”

There was a lot of behind-the-scenes planning for the artistic piece titled “Tausamaaga Mulimuli", which in Samoan translates as “last supper.”

The project began in February this year and was jointly worked on by fellow Samoan artists at Manamea. They include Pele Tamiano, William Mauola, Vice Tofilau, Losbanos Pinoy ll, Tito Pritchard as well as Ms Mariner and Mr Peseta himself.

All full-time professional artists themselves, Manamea also has carvers and painters as well as administrative support and had the capacity to do the entire project in-house. And while it was difficult to access the size of the canvas that was needed for the job during lockdown, with the help of family in Australia, a roll of canvas of the appropriate size was found and shipped to Samoa. It arrived six weeks later.

“The project started in February when negotiations and draft sketches began. There was a lot of planning behind the scenes to decide on the final design and price etc.,” Ms Mariner added. 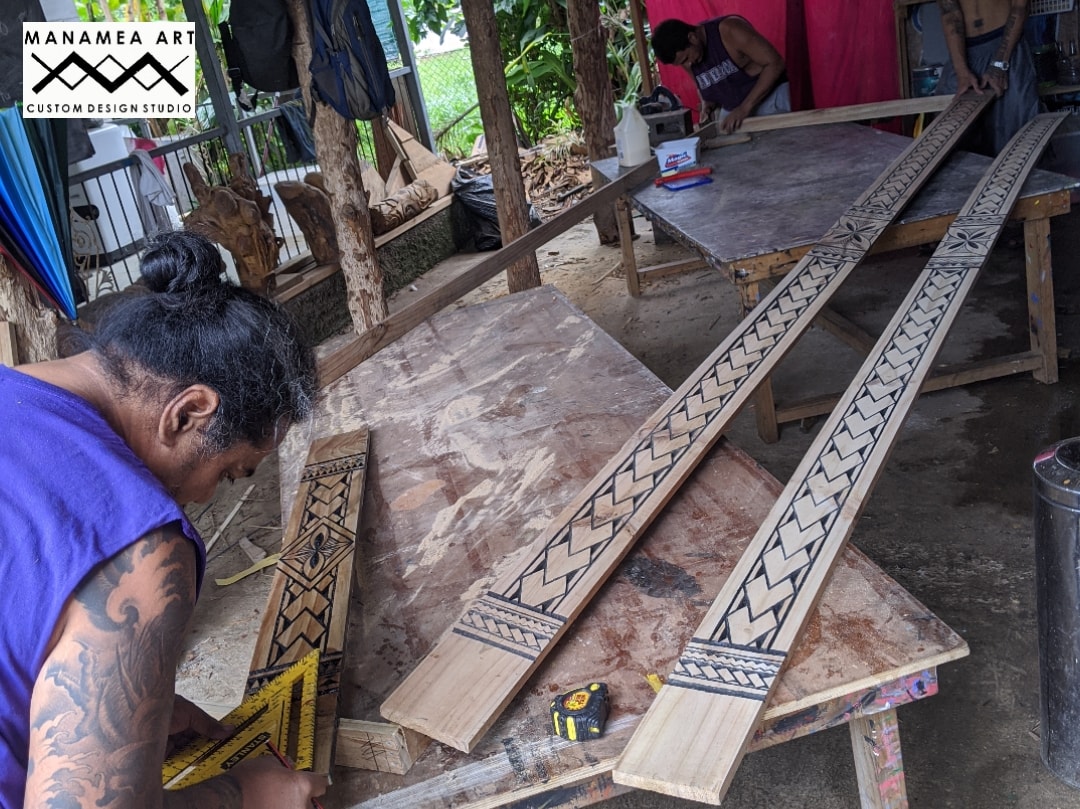 “Then we had to get the large amount of canvas shipped from Australia by boat because the borders were closed. That took almost six weeks.

“Then our team started work on the painting. It took seven of us to do it as well as build a carved custom frame. We installed it on the 21st of July.”

The most difficult part of creating the painting was the initial negotiation and installation, Ms Mariner emphasised.

“The artwork and teamwork was very smooth and we work extremely well as a team. It was so huge that it took ten men to get it up and into the room. This is the first religious painting we've done as a studio.

“Some of the artists do work that depicts Jesus or the Bible sometimes but we are not a church organisation. We love all art and put a lot of value on freedom of expression because that's how the most original fine art is created.”

Their specialty is customised original art in painting, tattooing and carving. They provide full-time employment and training to local artists who possess the talent and commitment to take their art to the next level.

“We sell fine art made in Samoa all around the world and regularly organise art exhibitions to highlight local artists of our choice. We are currently a team of six artists and one admin staff. Our mission is to create high quality original contemporary artwork in Samoa and sell it to the world,” Ms Mariner said. 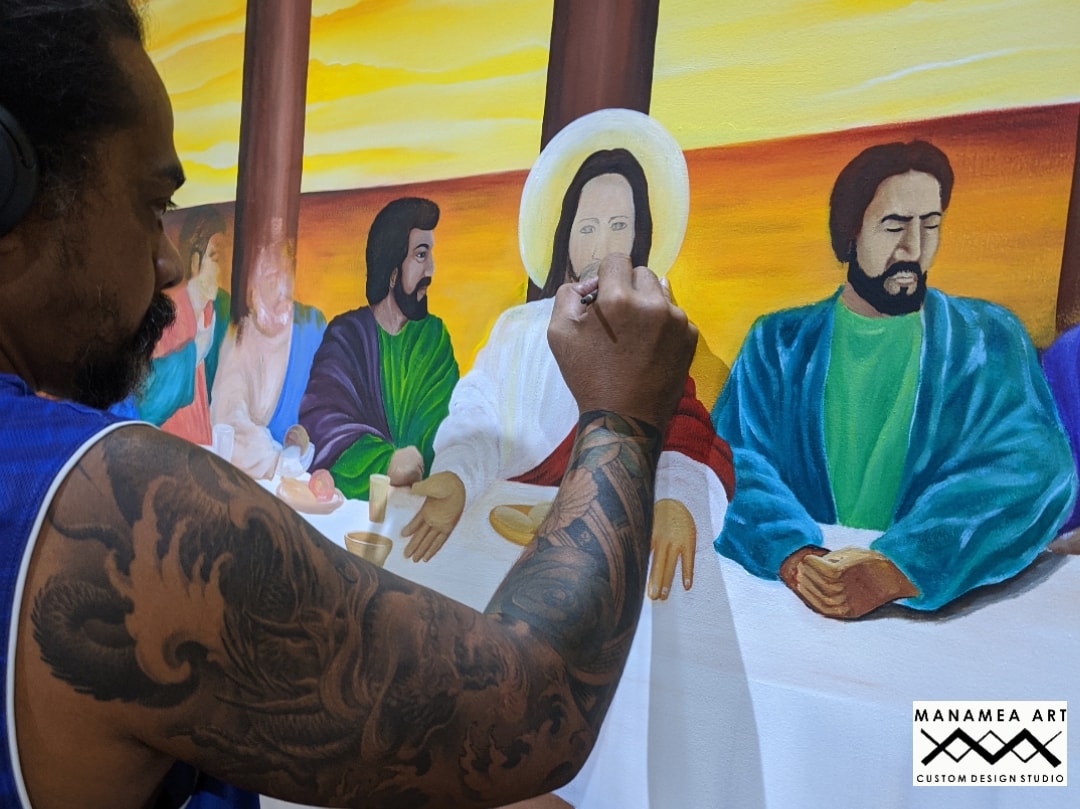 “We were honoured to create this for the Prime Minister. He has been a great source of support and encouragement for Manamea Art Studio and has visited our gallery before.

“When he came to us in Vaigaga in late 2018, he mentioned he would have some plans for us in the future.  He also encouraged us to keep working hard and creating quality art in Samoa.”

“She was a keynote speaker at the opening of one of our exhibitions last year. So we appreciate the fact that the Prime Minister and [former] Deputy Prime Minister are such strong supporters of local artists and our independent gallery.”

Italian artist Leonardo da Vinci’s "Last Supper" was painted between 1494 and 1498 under the government of Ludovico il Moro and represents the last dinner between Jesus and His disciples, according to the website milan-museum.com. 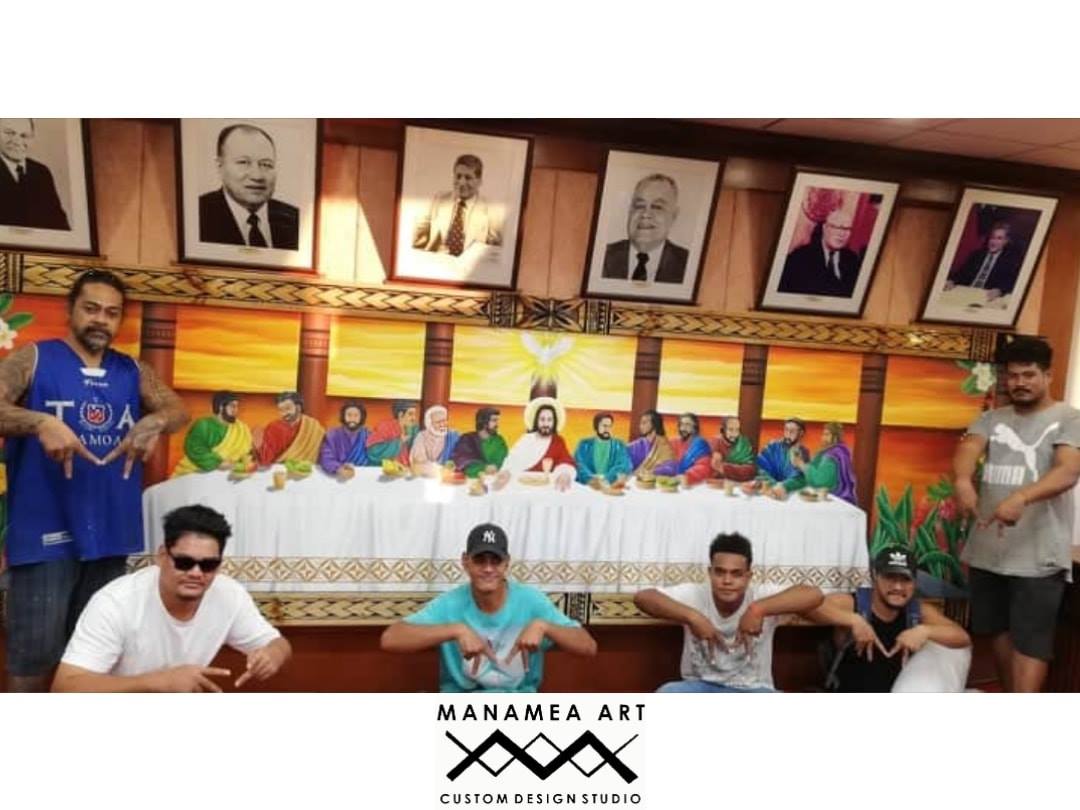 The colossal fresco of 8.8 metres in length and 4.6 metres in height is still in its original place, on the wall of the dining room of the former Dominican convent of Santa Maria delle Grazie. It is one of the most celebrated and well known artworks in the world.

It is not clear how much the Samoa Government paid Manamea for the Samoan artistic rendition titled "Tausamaaga Mulimuli."

Manamea will host an art exhibition opening in mid-October with the theme being portraits. The exhibition will be open to the public with free entry for three weeks. The public is invited to learn more about the art studio and gallery on their Facebook page or by visiting them on the main road in Vaigaga. Manamea is open Monday through Friday.