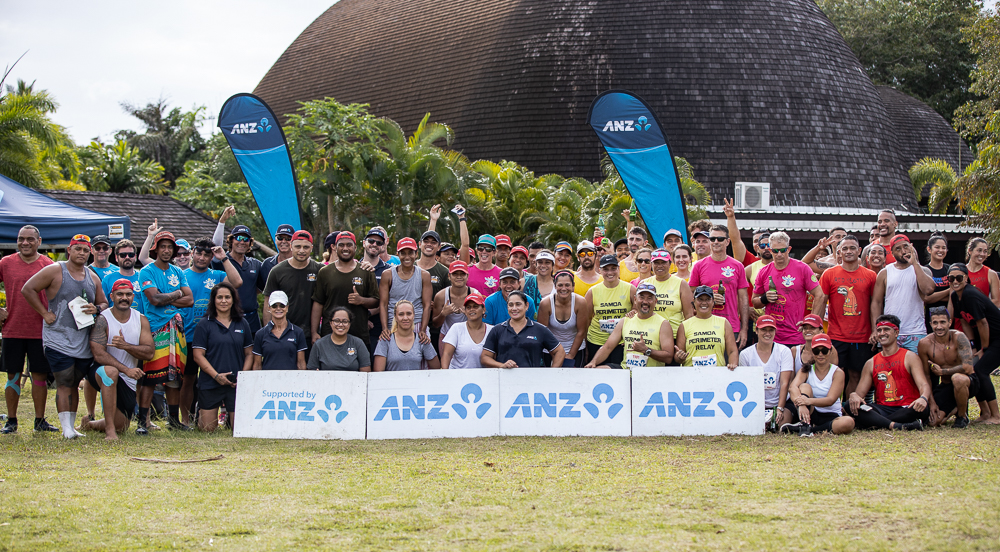 Ten teams competed in this year’s event, setting off from Sinalei Reef Resort between 2am and 7am, and ended at Tanoa Tusitala Hotel.

The race heads east from Sinalei and begins a steep climb at Samusu, through Tiavea and down to Falefa, then reaches the north coast of Upolu and until it reaches Apia.

Right behind Legs Go, the team of Apia Hash House Harriers came the Phat Burger Big Usos with just nibe hours, 32 minutes and 42 seconds, who came first among the mixed teams and ran closest to their predicted time.

In third place was Fatu Toa Black, a team of cross fit athletes who ran the relay in 10 hours, 46 minutes and six seconds.

Each runner does an average of 20 kilometres each in four or five kilometre blocks.

“The mood today has been really positive, everyone has done better than they expected with a couple of guys who had never run the perimeter before. I tried to prepare them for the worst and they absolutely exceeded,” he said.

The overcast weather took the “sting out of the heat,” and a team of dedicated supporters driving alongside them with cold towels and even an ice-bath in the back of a pick-up truck made all the difference.

Legs Go and the Apia Hash House Harriers were running with purpose: to raise money for the Goshen Trust Mental Health Services which runs a respite home and rehabilitation programme for Samoans with mental illness.

Mr. Howden said keeping that in mind on a sometimes gruelling run was inspiring.

“You look at the smiles on everyone’s faces today and the impact of exercise on people’s positivity and feeling good about themselves, that is a fantastic thing," he said. “Reflecting on that and reflecting on people who are going through a hard time drove us to do a really big effort, it was really very inspiring.” 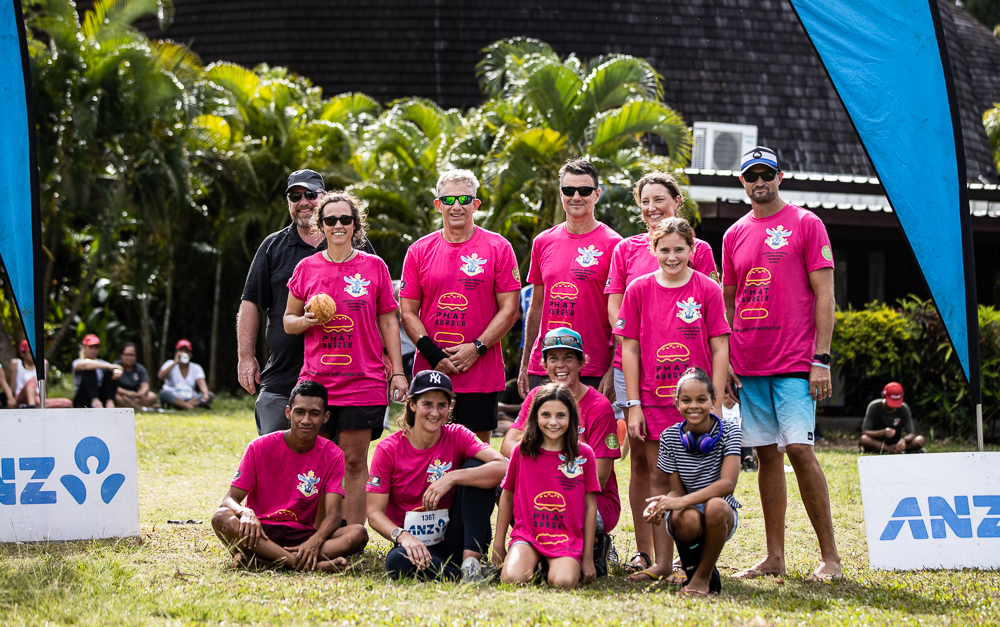 Second place winners the Big Usos captain, Amanda Wheatley, said her mixed team of experienced runners, internationally competing local athletes and some who hadn’t run in years performed well together. They were one of the last teams to set out at around six in the morning, but swiftly took over the earlier teams.

“Everything went right, the team kept a really good pace starting off well above what we thought our average was and we managed to hold it for a few rounds. Then it was the fourth run for everyone that started to get harder for everyone as we realised maybe we went a bit  too fast in the first bit.”

Team Captain, Tina Dobb, said they managed to beat their predicted time, with just one experienced runner on the team.

“We are rapt. All the teams just mustered together and supported each other at every swap, we were all cheering on all the other teams coming through, it was so excellent.”

For the Lil Cheesys, joining the relay was a big tick on the bucket list – something a lot of teams happily ticked off on Saturday.

“It’s unusual, it’s not something you would normally do, it’s very unique to Samoa, why not get involved.”

But the event doesn’t come without its risks, with wild dogs that come out at night and sleepy drivers who come out in the morning.

Ms. Dobb said they were able to ward off most of the dogs, but every member of the team had a near miss with a car or truck. 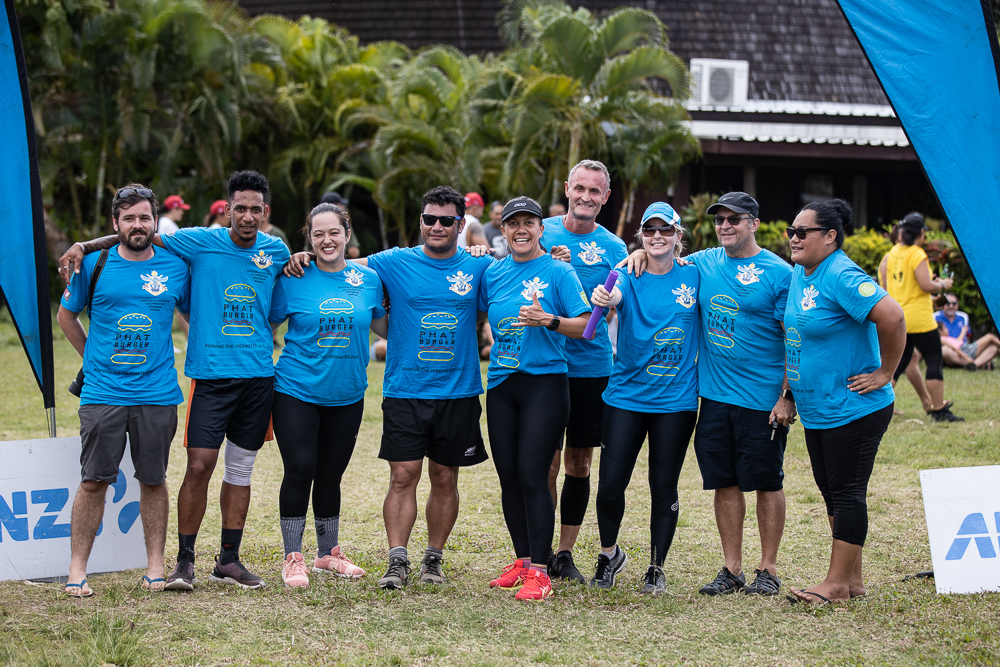 Happy Feet’s Michael Rasmussen, who has done the relay six times now, said as the only Master’s Team it is less about competing with the younger runners and more about the experience.

“It’s all about health, getting together, and camaraderie,” he said, pausing to shake hands and give pats on the back to other teams.

“It’s all about the fun. I tell these guys, the only reason we do it is for the teeshirt!”

Happy Feed first-timer, Eleanor McLeod, said the cooler, shadier weather played its part in helping the run go by, but that the incline and the steep downhill was tough. The team trained together for three weeks before the race, with very few of them coming from a running background. 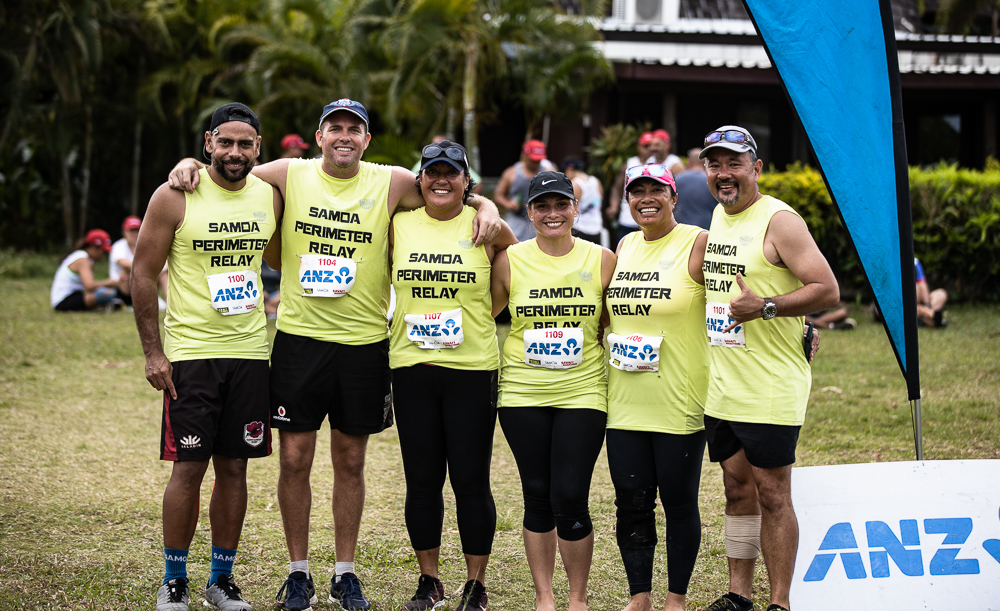 ANZ Bank entered a team this year as well as sponsoring the event. Team captain Bernie Poort said it was a thrill to overtake a couple of the teams that started before theirs.

They finished the relay in 11 hours, nine minutes and 58 seconds.

“We were really lucky, everyone held together in our team,” he said.

“We had a really good mix. When you have someone like Darren Young who is probably one of the best runners in the country and a balance of those like me and Susie who have been running a long time and Bob who it’s his first time ever in a running event that is great to see.”

He said the race was both extremely challenging and rewarding, and the bank took the opportunity to join the fundraiser for Goshen Trust with a number of staff contributing to a $1000 donation.

“The afternoon is definitely much tougher. If you have been sitting in the car for a number of hours the third and fourth parts of the relay … it’s really tough, with weary legs and the sun beating down.

“Samoans are screaming out to do something at the moment, everyone is a bit bored and it is nice to be out and about and enjoy the beautiful country.” 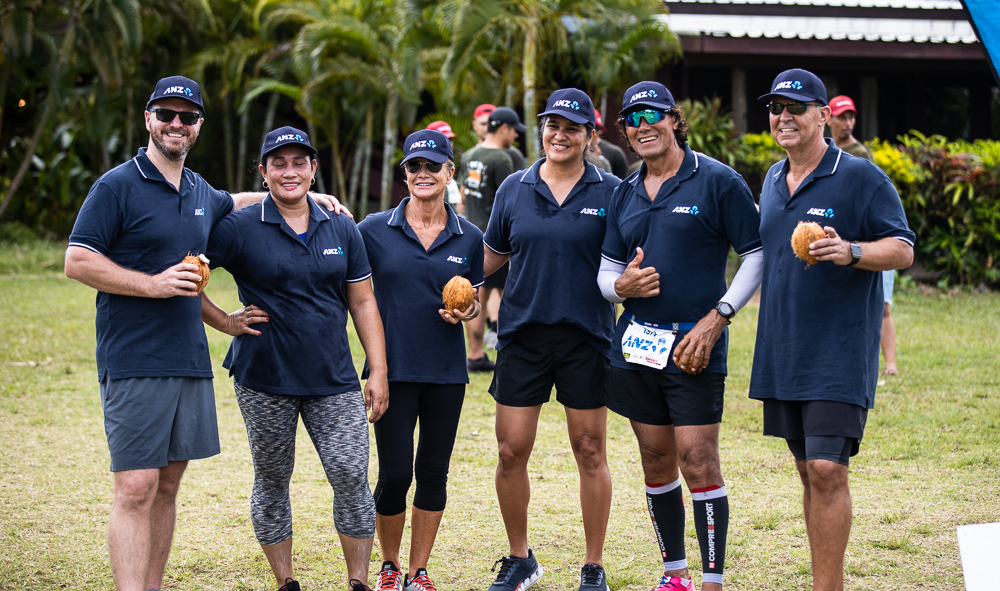