A young Samoan man has been admitted to the bar in New Zealand despite the global coronavirus pandemic and all the upheaval it caused in the country.

In doing so, Fagafua Romero Noel Tobyas Viane-Papalii, the eldest son of District Court Judge, Alalatoa Rosella Viane Papali'i, is following the footsteps of his mother.

Fagafua has been admitted to the New Zealand High Court in Hamilton as a barrister and solicitor.

“I am humbled by this achievement and I want to acknowledge Legal Counsel Jerome Burgess, an associate at McCaw Lewis Law in Hamilton for his support,” he said in an email in response to Samoa Observer questions.

The graduate of Waikato University, who attained his Bachelor’s in Law in December 2018, was bestowed with the chiefly title Fagafua at Leulumoega Tuai on the same day.

Fagafua told the Samoa Observer that two days prior to his admission ceremony, N.Z.'s Prime Minister announced the introduction of a Level 3 lockdown in Auckland and Level 2 for elsewhere in new Zealand.

“My family and siblings from Auckland were unable to travel to Hamilton to witness this important event,” Fagafua said. 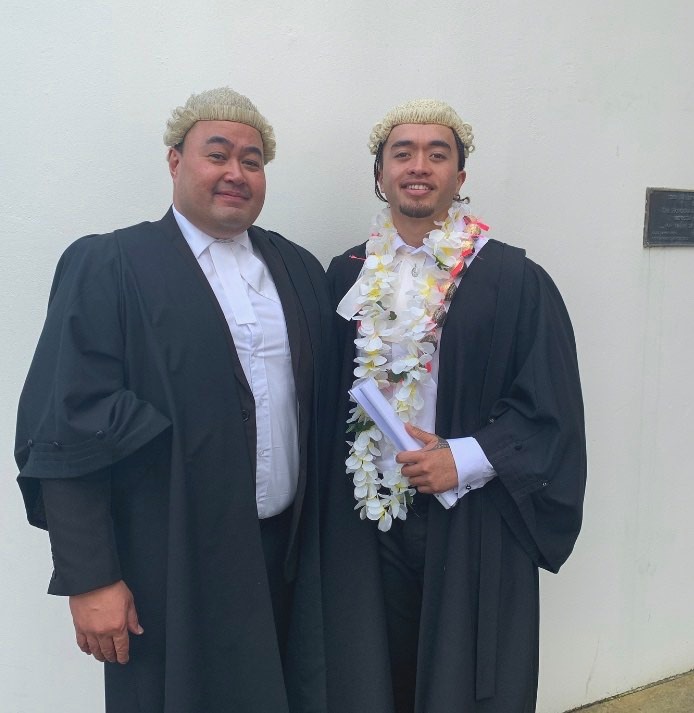 The eldest of four boys, Fagafua was born in New Zealand and moved to Samoa at a young age where he attended Samoa Primary, Apia Primary then Samoa College and Robert Louis Stevenson School.

His final year High School was completed at Sacred Heart College in Auckland, from where he chose to study at Waikato University.

Fagafua completed an intensive Legal Professional course in 2019, and was meant to be admitted earlier in the year, but his admission was delayed amid restrictions.

Becoming a lawyer was not Fagafua’s dream job, he told the Samoa Observer.

“After high school I had no clue as to what I intended to do with my life so my mother paved the way for me towards studying law at Waikato (which I will be forever grateful for) as she studied there as well,” he said.

“I wasn't very interested in law when I began my studies but throughout the years it started to grow on me especially in the previous year as I went through a few of my own personal issues.

“These issues made me reflect on my life, my future and past decisions.

“Let's just say I wasn't the sharpest kid growing up, I made some pretty silly decisions in my life. And during this self reflection it opened my eyes to wanting to seek a better life where I can be a better influence on not only my siblings but the people around me.”

That stoked an interest in the law, specifically commercial and environmental law, due to the ongoing impacts of climate change in the Pacific and wish to  play an assisting role.

Fagafua said he was blessed to have two sets of parents who are his strong supporters, especially his mother, Judge Alalatoa, and his step-father Alai’asa Schwartz Hunt.

“I dedicate this achievement to my grandmother Rosa Viane who prays for me and my siblings day in and day out,” he said.

“I am saddened not having his family here, and for the first time my mum was unable to physically witness an important event in my life.”

Fagafua is currently studying for his Master's degree in law at Waikato University, at which he works part-time as a Student Ambassador, with an anticipated graduation date of November this year.

He acknowledged with gratitude all those in Samoa and New Zealand who submitted character references for his admission application to the Law Society of New Zealand; and his aunties, uncles, cousins and close friends.