The Samoa Bureau of Statistics (S.B.S.) has clarified an article on contaminated drinking water in Samoan households, as a leading scientist calls for an “urgent investigation” into the matter.

The Monday edition of the Samoa Observer carried an article containing Government-released statistics that showed that 47 per cent of households surveyed had been found to contain E.coli bacteria. (“Nearly half of households drinking contaminated water: study”).

But on Tuesday the Samoa Bureau of Statistics issued not only a clarification about the statistics contained within the article, but more data showing the amount of E.coli contamination was greater than previously known. Nearly 30 per cent of households' drinking water was classed as having "high" or "very high" levels of E.coli contamination.

E coli is not necessarily a disease causing organism but rather an indicator of the potential for there to be faecal waste and other disease causing organisms in water supply. According to information from New Zealand’s Ministry of Health the amount of E.coli allowed in drinking water is zero: even 1 mililitre per 100 is not allowed.

The initial article on its presence in Samoan households’ water was based on the released of a preliminary stage of the Samoa Demographic and Health Survey-Multiple Indicator Cluster Survey 2019-20. Technical support for the survey was provided by the United Nations Children’s Fund; the United Nations Population Fund; and the Pacific Community.

The findings were based on a survey of 696 households across the Apia Urban Area, the northwest of Upolu and the rest of the island and Savai'i. The Samoa Water Authority declined requests to comment for the original article and on Monday.

But on Monday a statement released by the Government Statistician, Ali’imuamua Malaefono Ta’aloga, sought to “clarify the correct interpretation” of the survey results.

Her statement also included previously unreleased figures showing the amount of E.coli contamination in drinking water - leading to calls from experts for an examination into the cleanliness of the nation’s water supply.

“The number of sampled households which have been interviewed to test the drinking water quality was only 696 households,” Ali’imuamua said.

Ali’imuamua said she would respond in "due course" when asked if this level of households was a large enough sample size from which conclusions could be drawn and was reliable statistically.

Dr. Kris Hartley, an Assistant Professor of ]Policy Studies from Hong Kong University contacted by the Samoa Observer on Monday said the number of households surveyed met the criteria required for such research.

“There should be no concern about the survey's methodology,” Dr. Hartley said.

“I would not expect these methods to be the source of any problematic inferences.

“The sample size is not unreasonably low given confidence levels and margins of error that are commonly accepted in statistical studies."

Ali’imuamua’s response stressed that the S.B.S. factsheet on which the story was based was only a preliminary survey.

But it also released previously unreleased information about the amount of water contamination in Samoa.

According to Ali’imuamua’s response the 47 per cent of households with contaminated drinking water were made up by those with moderate counts of E.coli (17.9 per cent); high counts (15.4 per cent); and very high counts (13.7 per cent).

The new information about the amount of E.coli contamination was cause for concern, according to experts contacted by the Samoa Observer. 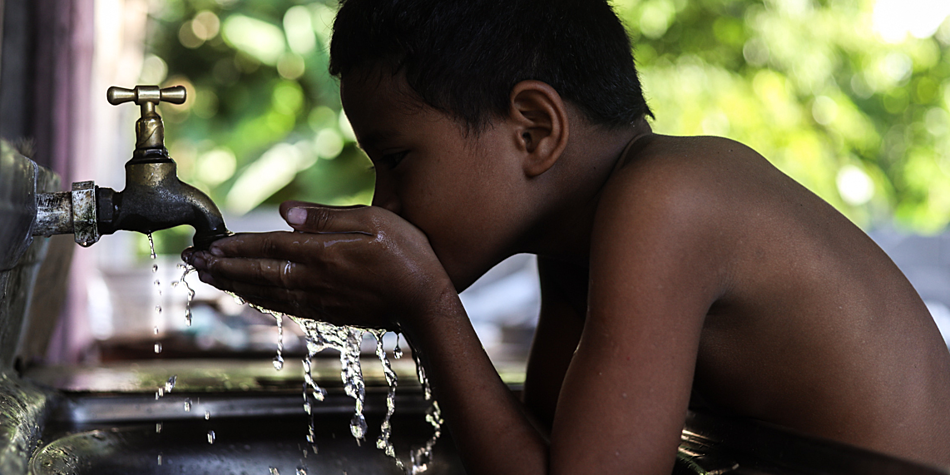 “The high prevalence of E. coli in drinking water, and particularly high and very high counts, do indicate the presence of, most likely, faecal contamination in household supplies.”

“The figures are worrying; no E.coli in drinking water is permissible in [New Zealand] so the 47 [per cent] should be urgently investigated.

“Much more information [is] needed [such as] information on trends in waterborne diseases at hospitals etc., and whether [the Government is] doing source tracking on E.coli in water [...] looking at [the] D.N.A. of [the] E.coli to see if [it comes] from [humans, birds, cows, pigs etc.].”

Late on Tuesday a spokesman for the Samoa Water Authority (S.W.A.) noted the figures reflected households both connected via the S.W.A. and independent water schemes. The Authority's spokesman said it was working to address untreated water issues through new investment.

“S.W.A. still has villages on a flat rate because there is no treatment for their water supply at the moment,” the spokesman said.

“This includes [the] Afiamalu area, Tiavea and part of Gataivai, we are currently rolling out our captial works programme to address this.

“All other untreated areas are independent schemes”.

The spokesman said the Authority’s aim was to treat all villages with remaining untreated water: “Untreated supply schemes whether S.W.A. or independent are regularly advised to boil water.”

Ali’imuamua said: “Detailed analysis for this survey will be disseminated in due course. The media is most welcome to get clarification before they offered their own interpretation of statistics.”

Professor David Hayman, an expert in biomedical sciences from Massey University, said the survey presented another point of concern about the potential of rising contamination from water sources to households.

“The more E. coli there are the worse the contamination is likely to be and the likely greater the risk that there are pathogenic organisms in. However, typically drinking water should not have any E.coli.”

Professor Stuart Khan from the University of NSW in Sydney, Australia said: "Much of the contamination could have occurred at the home (rather than coming from the source). If water is stored in open tanks, or mixed with rainwater etc, bacterial contamination is a likely outcome."

A spokeswoman for U.N.I.C.E.F. defended the organisation's approach to sampling, noting that the households were selected at random and using "systematic equal probability sampling procedure" based on weighting from the last national census.

The spokeswoman also said other countries in the Pacific had performed worse on the measure of E.coli contamination than Samoa, such as Tonga which has previously recorded a level of 78 per cent for the indicator of "faecal contamination of household drinking water".

The spokeswoman did not immediately respond to a comment asking about the comparison of "high" or "very high" households in Tonga when compared to Samoa.

Ali’imuamua’s statement is reproduced below in full:

The Samoa Bureau of Statistics wishes to clarify the correct interpretation of the statistical indicators pertaining to Water, sanitation and hygiene, as indicated in the Fact Sheet of the Samoa Demographic Health Survey and the Multi-Indicator Cluster Survey 2019-20, as reported by the Samoa Observer in their front page on the 17th of August 2020 issue.  The report is available on [the] SBS website at www.sbs.gov.ws.

Firstly, the survey was conducted from October 2019 to January 2020 and it selected 3,675 households.

Secondly, it is noted in the report (page 3) that the number of sampled households which have been interviewed to test the drinking water quality was only 696 households. This is about 2% of 28,880 households at the time of the survey.   Of this total 69.8% (486) had water from the SWA (both treated and untreated), 17.4% (121) had their water from the Independent Water Scheme and 12.8% (89) had water from other sources such as well/spring, stored rainwater, etc.

Thirdly, the Water quality test was conducted from the drinking water used at home, and not at any water catchment or actual source of water. Therefore, the presence of E.coli could be due to the actual source of water or water storage at home or water leakages or any other contributing factor. The test is a standard tool that is used by UNICEF for household surveys and is technically sound. Members from the Water Sector have all been part of the training for this household survey. We have the Manual for this test for further clarification.

Finally, the result in question (47 percent of households had faecal contamination in their drinking water) is a total value that represents the breakdown of 4 categories of E.coli (Low, Moderate, High and Very high levels of E.coli).

The breakdown is as followed:

The last three categories (moderate to very high) added up to 47% that you have reported hence missing out all the important clarifications as stated above.

The detailed analysis for this survey will be disseminated in due course. The media is most welcome to get clarification before they offered their own interpretation of statistics and data to ensure that the public is well informed of the facts and mainly the clarification of survey findings.