The president of S.W.A.G, Shelley Burich told the Samoa Observer in an interview that the S.W.A.G Market was a response to COVID-19. (Photo: Marc Membrere)

The President of S.W.A.G., Shelley Burich, told the Samoa Observer the market was an in response to COVID-19 restrictions and the closure of Sunday markets.

"When the Government had to close down the Sunday trading, it stopped the opportunity for our members to potentially earn money," she said.

"So we tried to look at other options, we tried talking to the Government to see whether they could consider reopening Sunday markets, we put a submission through the Chamber of Commerce to see if they could discuss that, unfortunately, they couldn't."

She explained that S.W.A.G. looked at other alternatives and it was made possible by the generosity of one of their members, Mikaele Maiava,  who owns Bella's kitchen.

"He spoke to the others here, Italiano pizza and Cocktails on the Rocks, and they were quite happy to open up their storefronts to allow us to come here on a Saturday trading," she said. 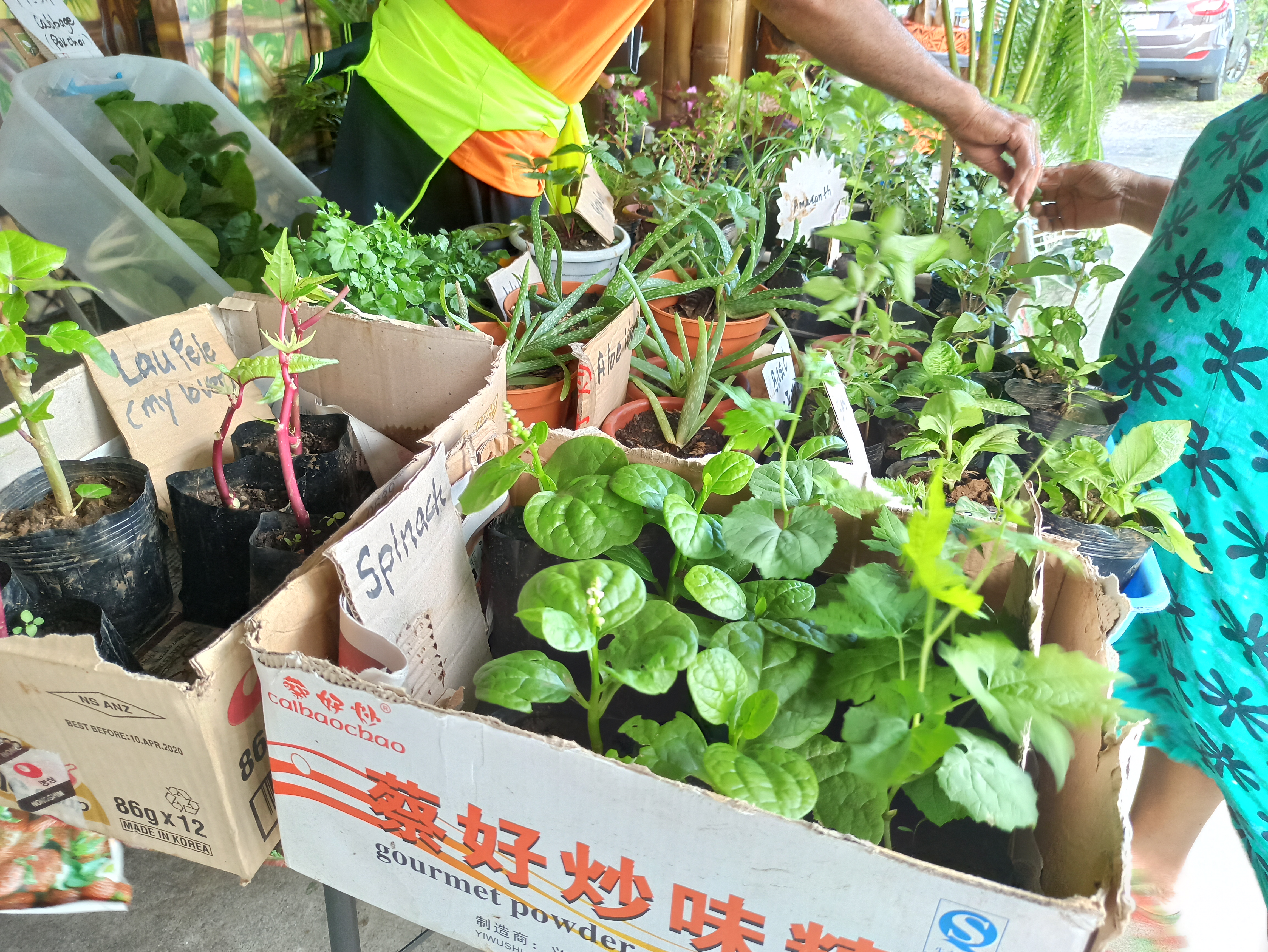 "So we started it, nearly three months ago and it is growing. Initially, when we started we only had two spaces and then it just grew and it has gotten to the stage now where we are unable to add on new members. We have a lot of people who would like to join S.W.A.G. particularly for the opportunity for the market vendors."

"This is our last Saturday here at Tauese. We've have been again kind enough [to] have opened up [one of our members'] space it will be down at Matautu next week," she said.

According to Mrs. Burich, they didn't expect the S.W.A.G. market to be as popular as it has been.

"It's been very encouraging, not only for the council but also for its members," she said.

"I would like to thank the store owners, they have been so generous and opening up their doors and allowing us to be in front of their businesses and I certainly hope that throughout all of these weeks and months that we have been here, I hope that we have actually been able to generate more customers for their own businesses.

"It is not only the market vendors who are benefitting from their sales but is also the business owners benefitting as well by having all of the customers here coming into their stores."

Mrs. Burich also thanked the village of Apia and the market vendors.

"This market would not be as popular or as vibrant as it is without them. It is the market vendors, it is their produce that has made the market really special and that is why the customers love coming here. I want to thank our customers who regularly come and look at we've got," she said.

S.W.A.G secretary, Papali'i Mele Maualaivao, stated that the first S.W.A.G. market on Saturday is a safe space for the market vendors compared to the previous Sunday trading.

According to her, prior to the Sunday trading restrictions, vendors had to set up their stalls at midnight since the Sunday market opened at 4am. She explained that it was not safe for most of the vendors due to the amount intoxicated club-goers.

"We wanted to get the Police to come so that the people coming from [night clubs] don't bother the vendors. There were those types of concerns so it was really important for us to try and create spaces," she said.

She explained that with their current Saturday market they don't have to deal with those situations anymore.

"They pushed it as far as they could but we understand that the Government stands on the Sunday mark, we are just grateful that they have allowed other vendors the opportunity to start making their money."

Papalii told the Samoa Observer that all the vendors at the S.W.A.G. market have received hygiene cards from the Ministry of Health [M.O.H.].

"The whole point is for everybody to use this as a platform to experiment. You get to hear directly from people what they want or what they don't want. You also get to get really good feedback from people when they love your product it makes you feel very proud," she said.

"I think that is the best part of having a market."

Papalii explained that S.W.A.G. has a diverse group and diverse interests.

"And that means we always have to be fresh in the types of projects we seek funding for. One that we are going to be starting soon is focusing on how to reduce plastic, reduce plastic for vendors, reduce plastic in your daily use and go into more traditional methods like weaving using banana leaves to help reduce the use of plastic," she said.

Papalii said that there should also be more women involved in the designing and creation of market spaces.

"There is no doubt when women are involved you end up having more toilets, better lighting and safer spaces," she said.

"We usually have better spaces for children so that it is safer for them and if you are really lucky to have the money, you are actually able to create places where women who are coming from long distance can stay in a protected space and have rooms where they can sleep the night so they don't have to spend the night sleeping on the ground waiting for their stalls to open.

"In my mind, that would be a beautiful way for us to move forward when we think about the market."