First layer of asphalt on the new bridge is complete (Photo: Land and Transport Authority)

The roadwork to the Vaisigano Bridge is 90 per cent complete with the final touches being done before the work is completed next month.

She added that there will need to be a two-week road closure to ensure the finishing touches are fully completed.

"This covers the roundabout which has been open to the public. We would have to close it down so we can seal the road in that area," she said in a phone interview with the Samoa Observer.

"The scheduled amount of time that we will fully close the road will be two weeks. However, we are trying our best to expedite the sealing works so we can complete the sealing before the two weeks is over." 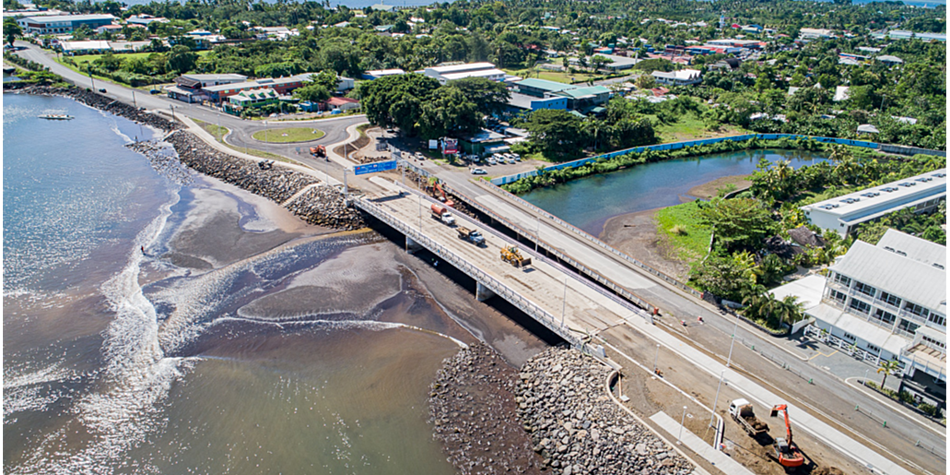 The bridge road will only be two lanes. The first exit of the bridge from Beach Road will be a five meter road into the drive in front of Juliana’s Car Rental as well as to the residents living behind Vaisigano.

The new bridge and road at Vaisigano is expected to be open to motorists for use in mid-August, added Galumalemana.

The CEO also acknowledged the cooperation and patience of the travelling public as they tried to complete the project.

The new bridge is 1.5 meters higher and 20 meters downstream from the old one.

Since the start of the construction in 2018, members of the public have been keeping themselves abreast of the progress, with the US$80,000 sign board installed late last year the latest addition.

The construction has resulted in the temporary closure of sections of the road leading up to Vaisigano to allow more space for the work to proceed.