The entrance and walkway into the Samoa Tourism Authority [S.T.A.] fale in town has been given a full makeover by the Manamea Art Studio.

The studio was commissioned by the S.T.A. to design a new entrance and walkway into the popular tourist building, and took seven weeks to complete, according to artist and Manamea Art Studio co-owner, Lalovai Peseta.

He said the S.T.A. gave the studio the theme “beautiful Samoa” to highlight in their artwork at the new fale. 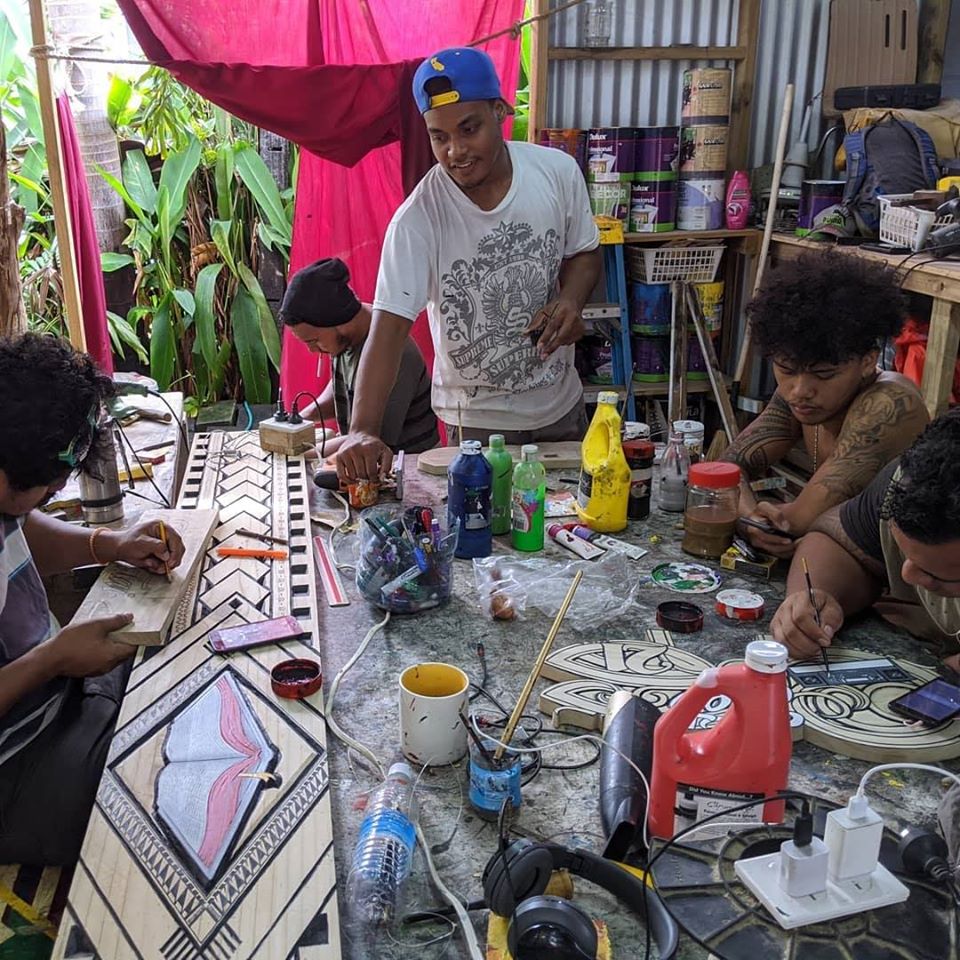 "They asked us to use tatau patterns in the design. It made us ask what is beautiful about Samoa, so this was our response to the question. Beautiful surroundings and landscape, beautiful culture, beautiful art forms and beautiful faith," he said.

The studio was commissioned on the eve of the COVID-19 global pandemic lockdown in Samoa.

Nikki Mariner, who co-owns the Manamea Art Studio with Mr. Peseta, said that they rely heavily on international shipping orders and tourists. But as the country went into lockdown, it threatened the studio’s survival and the livelihoods of their artists.

However, the S.T.A. contract came at the right time, as it kept the company afloat and their in house artists employed despite the drop in customers. It was also their biggest commissioning work due to the duration of the work, the public visibility and the combination of artistic skills needed to get the job done. 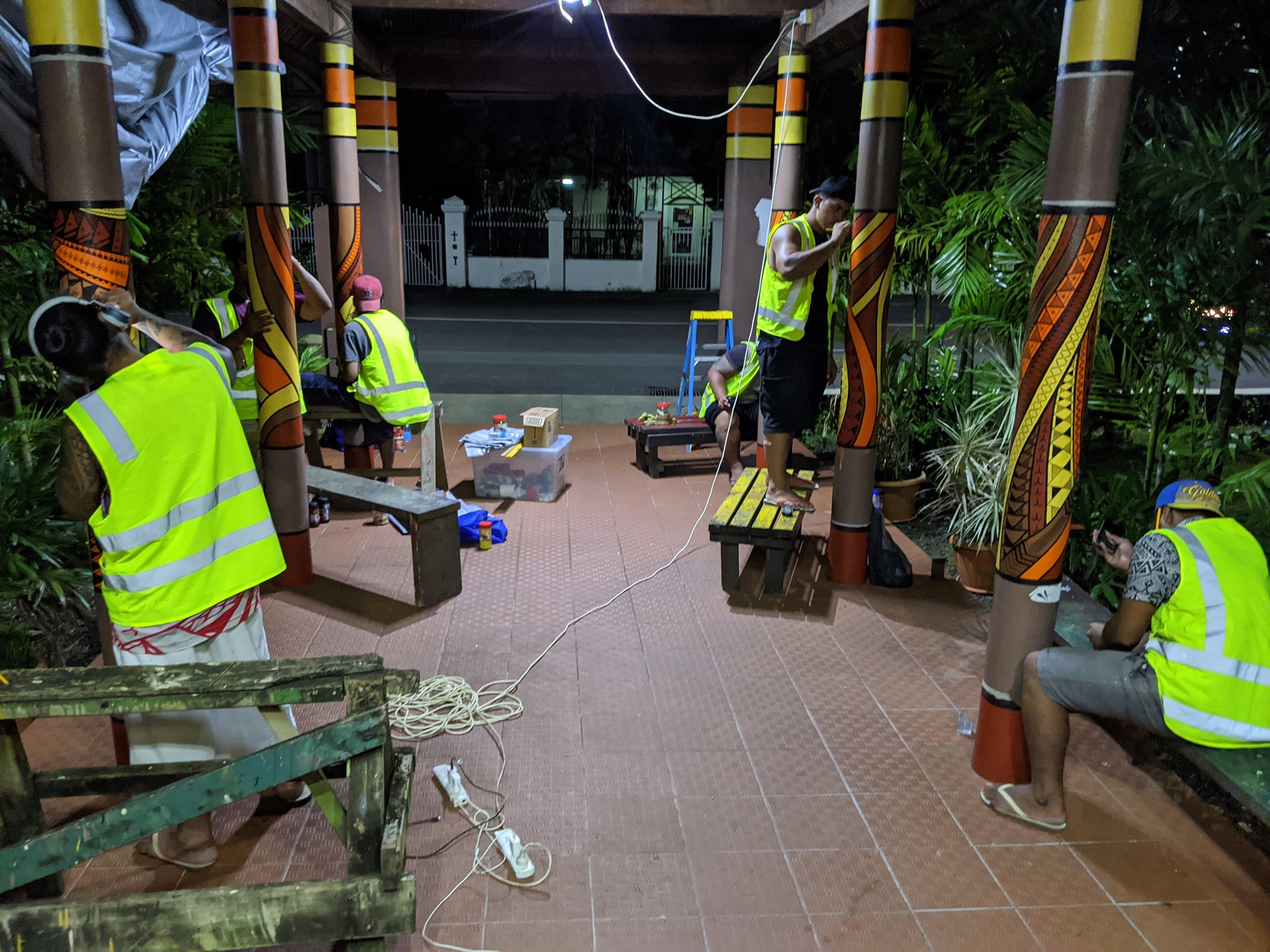 "We had to be designers, cultural experts, carvers, painters, and installation crew," Ms. Mariner added. "Fortunately these diverse skills are what we specialise in, and we rarely get the opportunity to challenge ourselves on all these skill sets in one project."

While the studio and its personnel have been able to overcome a myriad of challenges that they faced over the course of the project – including 5pm to 2am working hours three to four times a week – Ms. Mariner said the weather and public curiosity were often difficult to overcome.

"The weather was rough sometimes and we'd get rained on. Or the rain would wash away what we'd just painted. The poles are very high and immovable which meant it was often backbreaking to paint tiny patterns by hand," she added.

"Also, we were working in full view of the public. Many passersby were supportive and interested, but we also attracted some strange attention in the middle of the night."

Transportation to and from the project site was also a major hurdle, as they didn’t have a vehicle and it became an issue when they finished working at 3am the next morning. 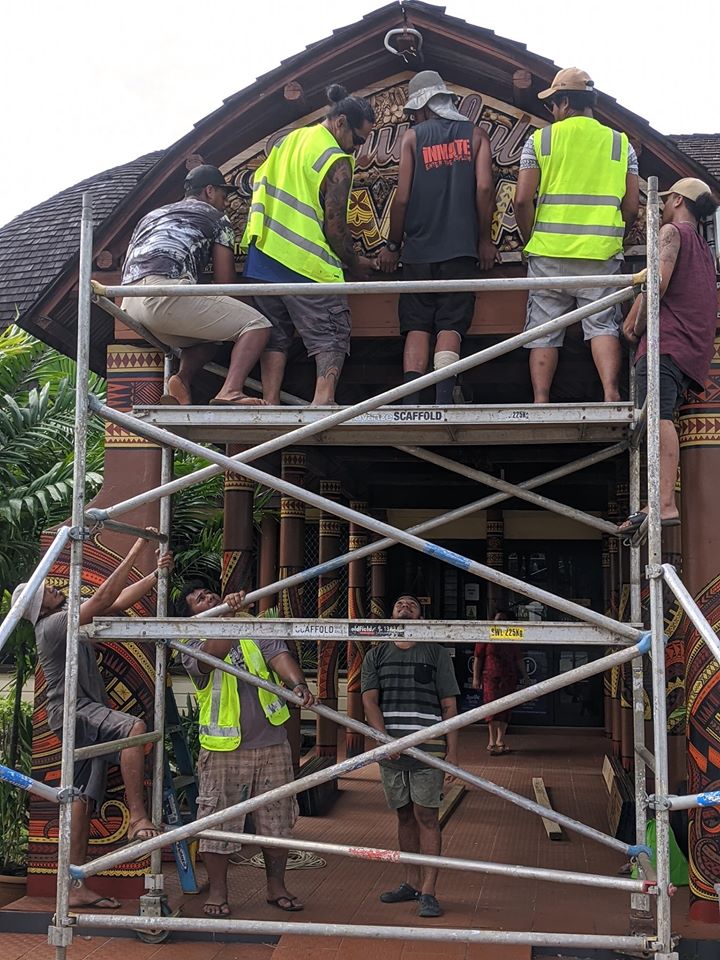 But the benevolence of a taxi driver from the Kol-A-Cab company enabled them to overcome the difficulty, as he would pick them up at those odd hours when they called him.

Now, at the end of the project, the artistic couple want the public to check out their art at the S.T.A. fale, which they called the “Manamea flow”.

Mr. Peseta is keen on people seeing their artistic creation while Ms. Mariner says their artwork will make them feel welcomed in what is a quintessentially Samoan space.

"One that inspires awe and draws from the Samoan environment and culture in a contemporary yet classical way," she emphasised. "In our workshop in Vaigaga, we carved and painted 20 large individual panels and a huge 'Beautiful Samoa' sign. This took six carvers six weeks.

"There were 14 large poles and surfaces which were each painted by hand in unique designs. There were hundreds of hours of work in total.

“Installation happened in one day and took 10 people to get the carvings in place.”