The Public Service Commission (P.S.C.) has strongly rejected a claim by former Regulator, Lefaoali'i Unutoa Auelua-Fonoti, that the Commission denied her Constitutional rights and that the process which led to her resignation was unfair.

“We unequivocally reject this allegation by Lefaoalii as false and misleading," a statement issued by P.S.C. said.

"The Commission did not violate any of Lefaoalii’s fundamental rights under Part II of the Constitution of the Independent State of Samoa.”

The reaction by the P.S.C. followed a press statement issued by Lefaoali’i when she announced her resignation. Lefaoali'i had criticised the P.S.C.'s handling of the investigation against her.

“The only regret I have is the treatment from the Public Service Commission, investigating a charge of which they themselves were the complainant, ignoring fairness in the process as well as denying my guaranteed Constitutional rights in questioning my accusers,” Lefaoali'i said.

But the P.S.C. argued that the Disciplinary process was for misconduct in an employment relationship – employer and employee (in this case a C.E.O.).

“It is of importance to realise from the outset that the Commissions charging procedure is between an employer and employee, not between an individual and the State such as criminal charges.”

The P.S.C. noted that like all C.E.O.’s in such circumstances, Lefaoali'i was afforded fourteen days to respond to the evidences acquired and witness’ statements gathered after the full investigation.

“At the close of business on the 14th day, Lefaoali'i did not provide any submissions to the evidence nor did she or her legal counsel make a formal request to the Commission for an extension of time to provide the same.”

Regarding the claim by Lefaoalii that she should have been given the opportunity to question "her accusers” the P.S.C. said this was not part of their process.

“To reiterate, the Public Service Commission process is NOT a Court process for a criminal case per se, and as such there would not be any other parallel process that can be undertaken or allowed to assume simultaneously.

“Lefaoalii was given all the evidence and the statements signed by each of the witnesses she referred to as “accusers”. If she wanted to dispute those statements then she ought to have provided a written response and evidence against the same. That is the normal process,” said the P.S.C.

Regarding the decision by Cabinet to not consider the recommendation to terminate the services of the complaint, the P.S.C. says they can only make a recommendation.

“In accordance with the process, the Commission determines the issue of whether a C.E.O. breached the Code of Conduct, then makes a recommendation on any of the following three penalties that it deems appropriate to be applied, BUT it is Cabinet that ascertains the final verdict and outcome pursuant to Rules 2.11 and 2.3 of a CEO’s Contract of Employment, and in accordance with Cabinet’s own mandate and prerogative.”

The P.S.C. concluded by informing Lefaoalii there are other avenues available under the law over allegations that her constitutional rights were violated.

“The Commission’s processes on disciplinary cases of misconduct under the Public Service Commission’s policy and law is non-discriminatory without preferential treatment to anyone or a group in the public service that is subject to its applications.

“This process is, has been and will continue to be consistently applied to all public servants including permanent staff and other contract officers.

“If Lefaoalii believed and felt that the Commission violated her constitutional rights, there are other avenues available to her wherein she could have pursued to address her grievance as provided for under the Constitution of the Independent State of Samoa.” 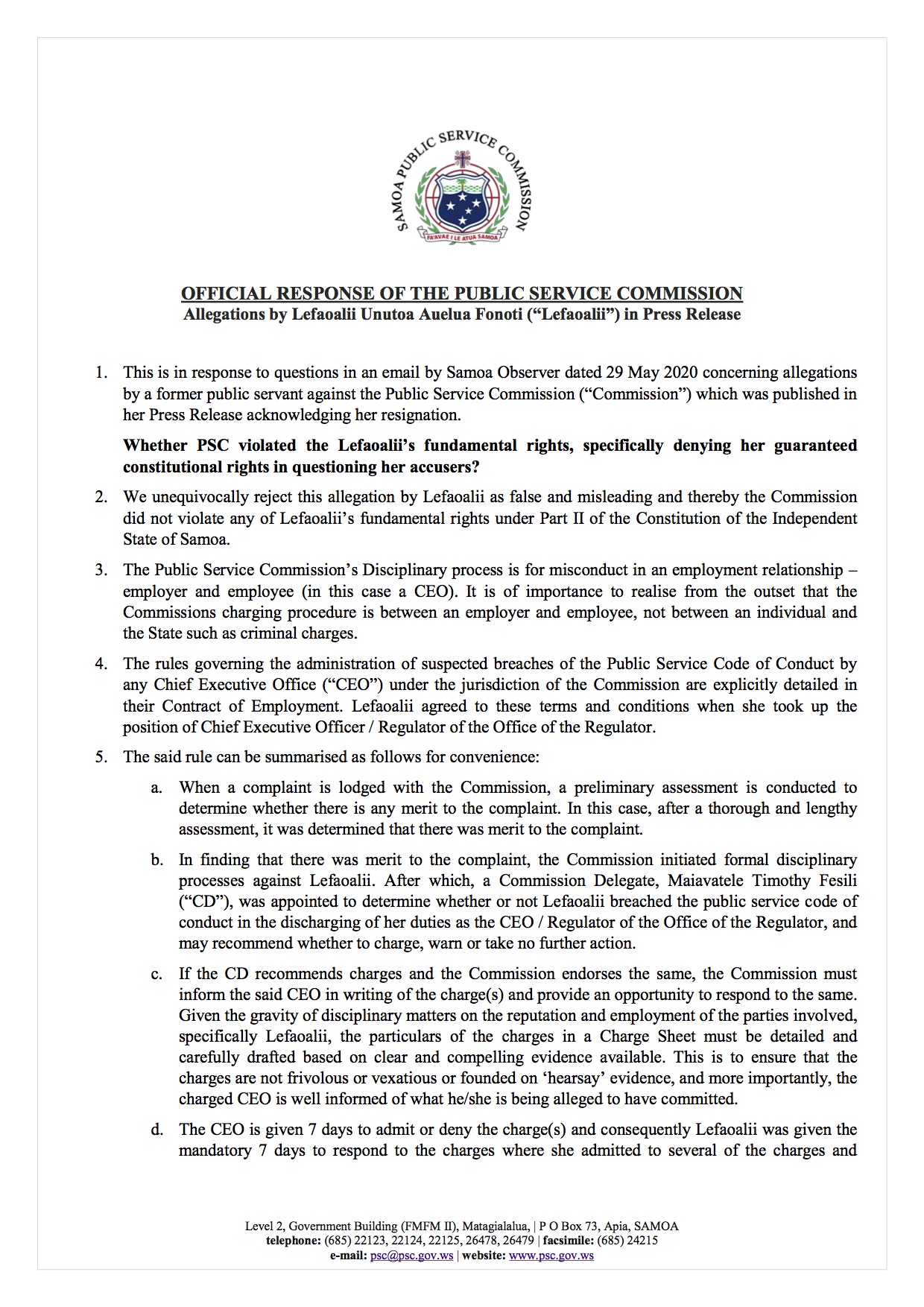 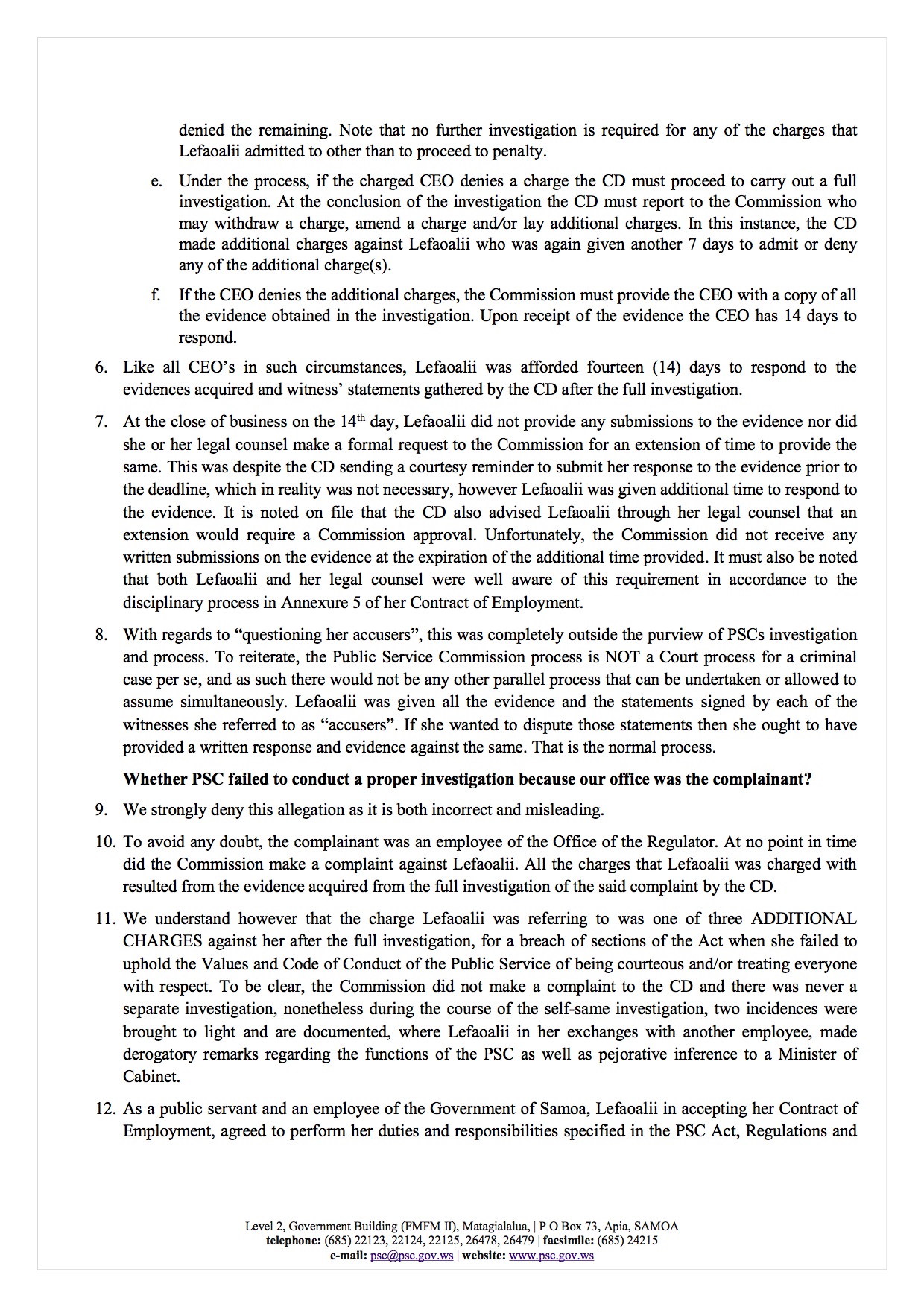 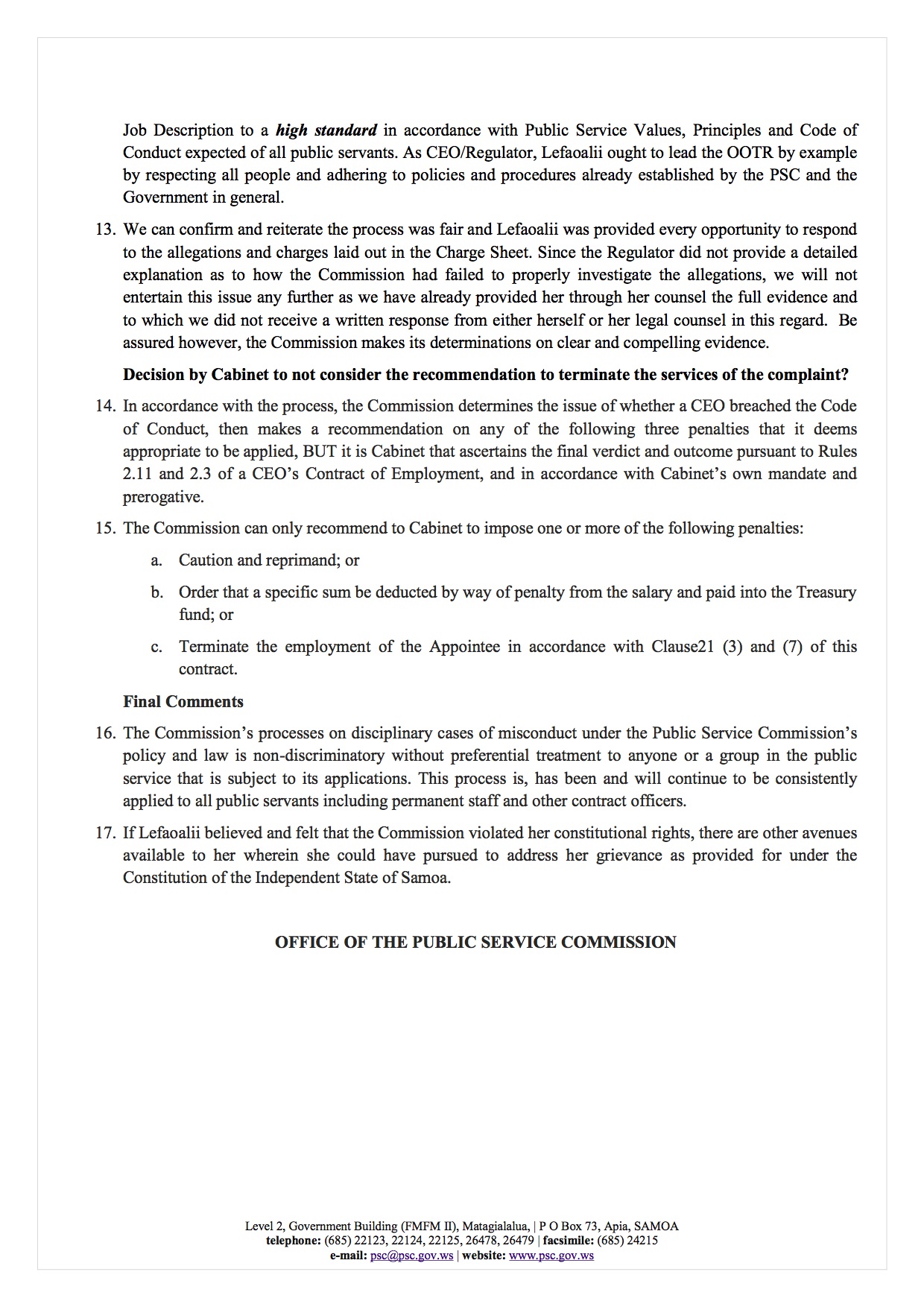