Digicel Samoa held a groundbreaking ceremony for the project at the site on Friday.

She played was instrumental in advocating and lobbying for the establishment of Digicel in Samoa as well as developing Samoa’s I.C.T (Information and Communication Technology) sector.

The late La’eimau and her husband, Samuel Savea’s only daughter, Luisa, is a former student of Samoa Primary School and the project is a gift from her mother and their family for the school.

Digicel sponsors the building of the computer lab with new computers and Samoa Primary School was chosen because this is where her only child, Luisa, went to school.

“We are proud to be here this morning to continue to celebrate the late Laeimau Oketevi Tanuvasa-Savea, who played a significant role and was instrumental in advocating and lobbying for the establishment of Digicel in Samoa as well as developing Samoa’s I.C.T sector,” Mr. Whitthuhn said. 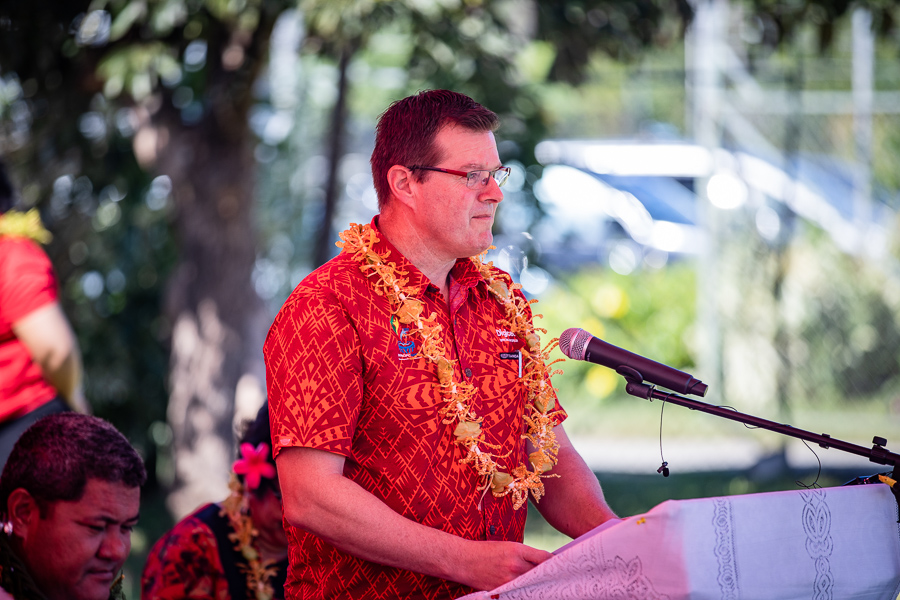 “The late Lae’imau, a visionary and technology warrior is survived by her husband, Mr. Samuel Savea, who is with us today, and their daughter, Luisa Savea a former student of Samoa Primary School.

“The key purpose of this project is to continue La’eimau’s legacy and passion for I.C.T. Furthermore, for young people to develop an interest in I.C.T as a field of study or career path. Like the late La’eimau, an innovative and forward thinking individual, this project is attributed to her.

“On behalf of Chairman, Mr. Denis O’Brien, the Digicel Samoa Board of Directors, our management and staff, we thank you all for being with us today and most especially to Lae’imau Oketevi, I am confident you are with us today in spirit, thank you for your vision, your passion and wisdom, without you we wouldn’t be standing here today. This is in your honor, may it shape up the values and attitudes of these young people to become future leaders of I.C.T.”

One of the Principals of Samoa Primary School, Anne Leauga, who spoke on behalf of the other two principals, Sue Su’a and Pau Iakopo gives her thanks to Digicel for the assistance.

“We thank them and of course we thank all the parents. We are really grateful as well for the support of the community, Mrs. Leauga said in an interview with Samoa Observer.

“I want to thank George Carter. He came in and helped out with one workshop on actually doing online learning and teaching.”

“This is probably a starting point to allow these students the opportunity to see what I.C.T is and embrace it,” Mr. Witthuhn said in an interview with Samoa Observer.

Work on the building will commence next week with an expected completion time of six weeks.