The peaceful march by the SSIG was in efforts to support the submission of the Samoa Law Society today. (Photo: Aufai Areta Areta)

More than 30 car loads of protesters, part of a Samoa Solidarity International Group convoy headed to Mulinu'u to submit a petition on Friday opposing three proposed bills to change the Land and Titles Court.

The protest started from Satapuala and displayed banners saying Samoa Ala Mai (Samoa wake up).

The bills, which have drawn heavy scrutiny from the legal fraternity, would amend the constitution to create entirely independent and Titles Court (L.T.C.), which would have decisions which could not be appealed to the Supreme Court.

A heavy police presence was also at the Tofilau Alesana building at Mulinu’u on Friday morning.

But members of the Parliamentary Committee to the Special Inquiry Commission into the proposed Lands and Titles Court met with protesters and revealed that processes following the Inquiry will be unique.

Despite normal processes of inquiries to be compiled and reported to Parliament after its completion, the L.T.C. matters will be taken out to the villages for consultations, the Falealili East Member of Parliament, Fuimaono Te'o Samuelu announced.

Fuimaono, who is a member of the Parliamentary Committee was speaking on behalf of the Inquiry Committee during a brief traditional meeting in response to the Samoa Solidarity International Group's (S.S.I.G.) peaceful car parade on Friday morning. 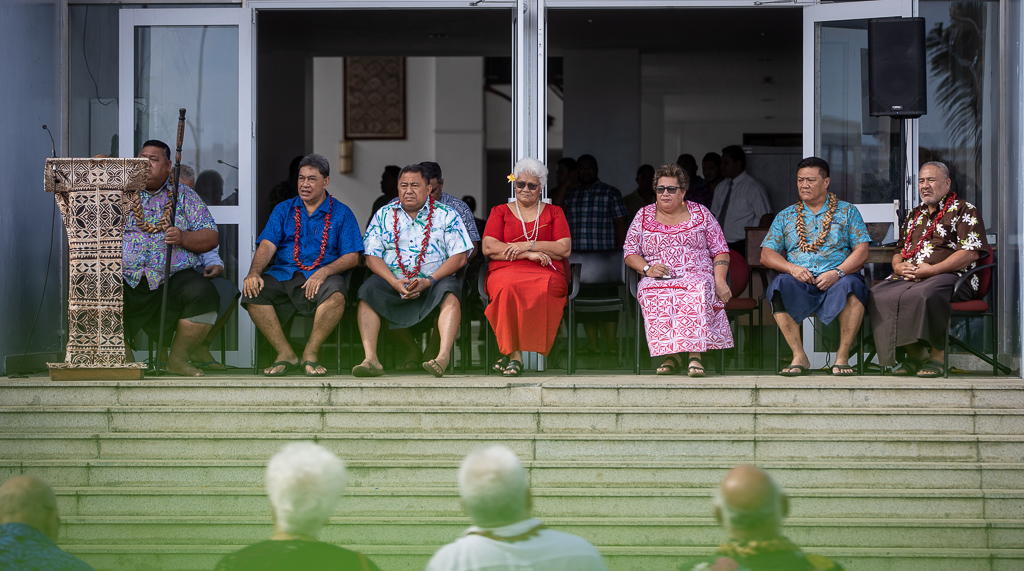 “The intention of the Committee is to ensure that this is not the end. Even in Salafai (Savai’i), the committee of constituencies will go around from village to village to clarify and consult with everyone,” he said.

“The Committee has decided to give the opportunity to the public to bring in their concerns and thoughts to build this law, because the bill belongs to us and not anyone else’s.”

Protesters received a symbolic donation acknowledging their presence of $1000, notionally to offset the cost of transportation.

Among the protesters was one bus whose main banner translated to “Samoa for Samoa but not for China.” Organisers were not immediately available to comment on whether there was a nationalistic or anti-Chinese element to Friday's protest.

The car parade of the Samoa Solidarity International Group (S.S.I.G.) made its way to the inquiry hearing in Mulinuu to show their support for the Samoa Law Society, who were set to appear in front of the Parliamentary committee on Friday morning. 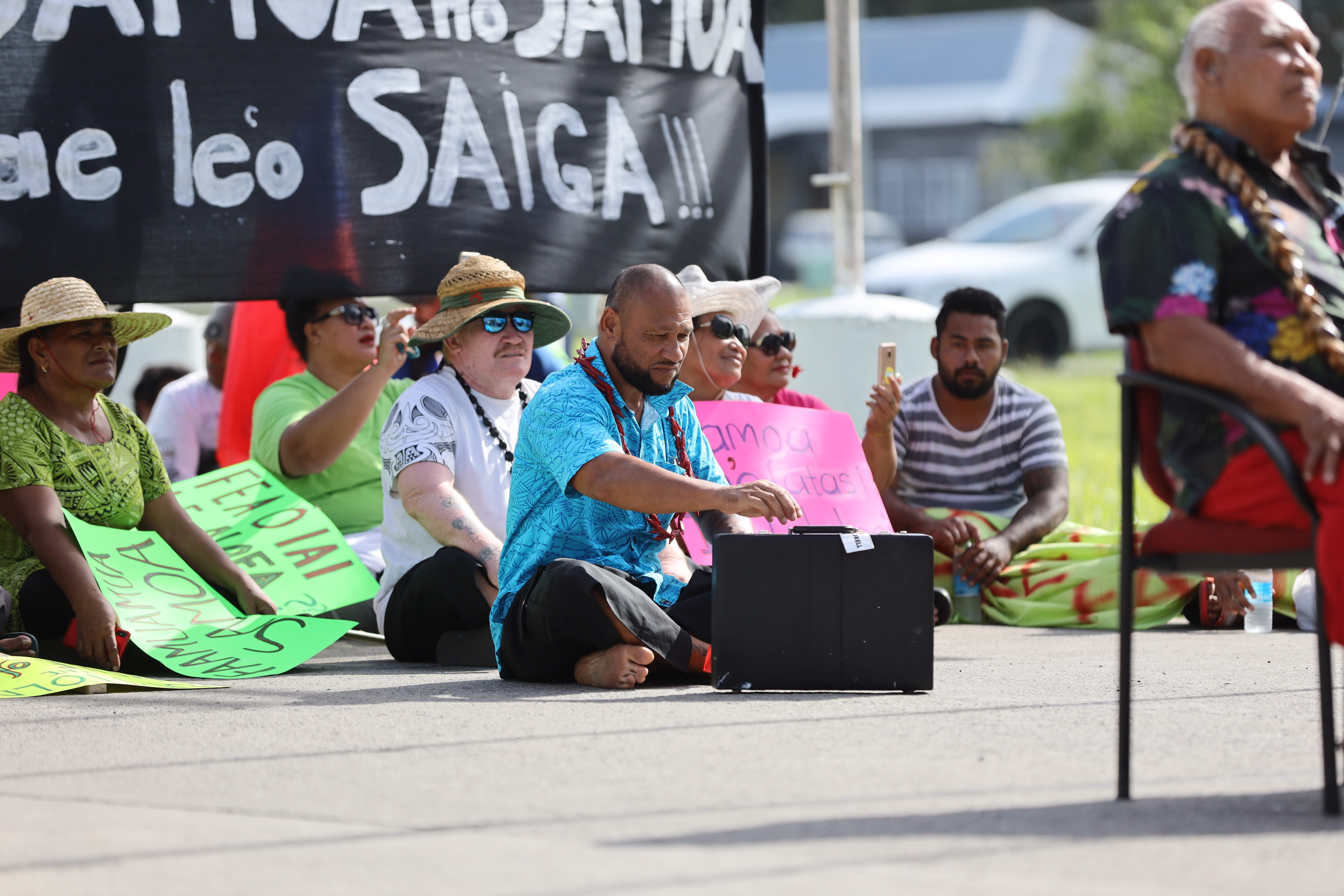 The three bills under scrutiny are the Constitution Amendment Bill 2020, Lands and Titles Court Bill 2020 and the Judicature Bill 2020.

The bills have passed second reading in Parliament.

The S.S.I.G.'s President, Nonu Uni Fonoti, told the Samoa Observer that the heavy Police presence was shocking but not intimidating but a relief for the group. 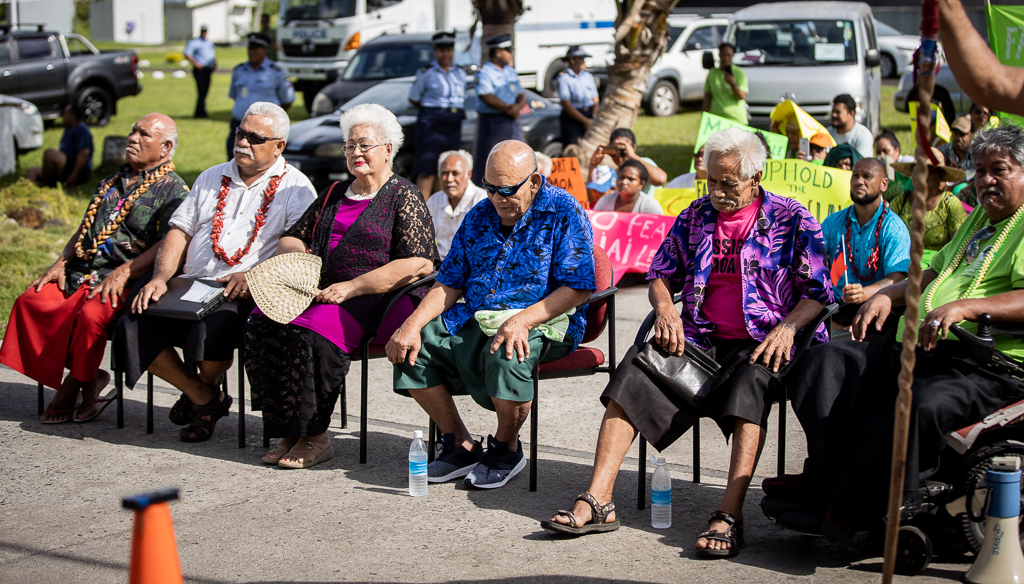 "We thought they would not let us through and stop us from coming here," he said.

"A Police car was there also during the parade letting us come through all the way and it's a relief that they are letting us have a voice.

“We made sure not to cause traffic or break any laws on our way here, we just want to send the message that we are against these bills and it’s all in our submission.”

He highlighted that the most important part is to voice their opinions against the changes regarding the Lands and Titles Court changes. 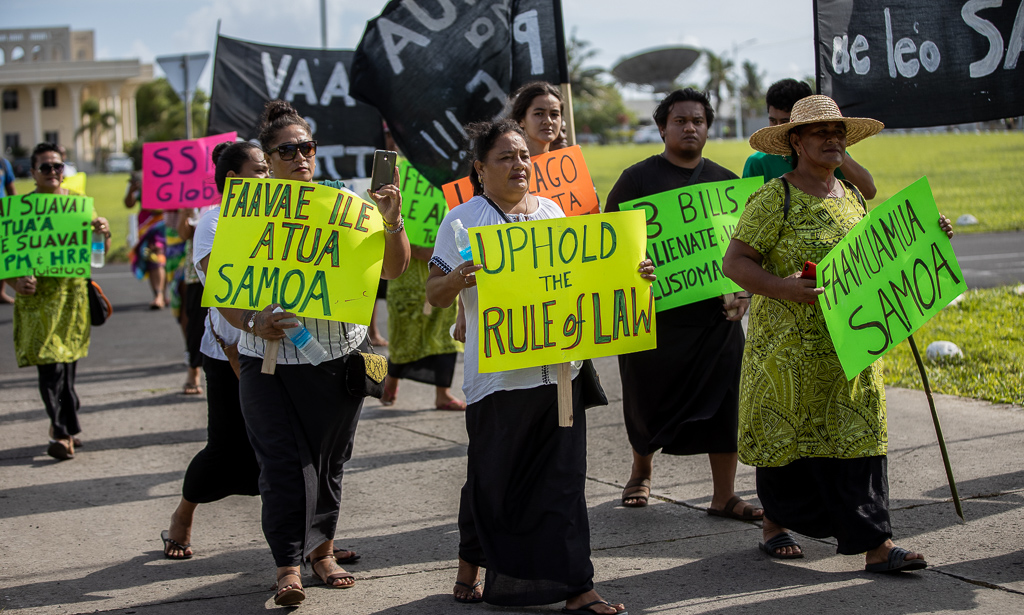 “So we want to have some kind of style with how we present it and how we deliver in that perspective, and that's why we're here," he said.

“They seem understanding of what we’re trying to do and I guess they were just looking for any kinds of rules being broken.”

The peaceful march is said to support the submission of the Samoa Law Society today.

The march was well attended by the Samoa First Political Party members and supporters in their lime green shirts with banners.

The Police started arriving at Mulinuu as early as 7 a.m. to await the S.S.I.G. car parade which started from Satapuala.

By 8.30 a.m. the first lot of Police arrived to set up their post at the Alesana building.

According to a Police officer, who is not authorised to speak, about 30 officers alone were posted at the Tofilau Alesana building.

Prime Minister, Tuilaepa Dr. Sa'ilele Malielegaoi, has defended a $500,000 bill for tent rentals without a tender process, saying it was simply “common sense" for the Ministry of Health to order them.