Tables and chairs are empty. No one is tending the bar because there is no one to serve. Workers have been temporarily laid off and the chef is running the kitchen at a different spot down the road for the time being.

The only sign of life at the popular Sails Restaurant in Mulinuu Thursday afternoon was a lone security guard who was keeping watch over the premises. It is temporarily closed.

Most of the security guard’s co-workers have been laid off. But a lucky group of seven are at the Yacht Club where, on Thursday, Sails has ‘re-opened’ to offer lunch and ‘happy hour’ specials.

The restaurant's General Manager, Masefili Aserona, knows what it’s like to be laid off. Early on in the Covid-19 state of emergency (S.O.E.) she stayed home for two weeks.

“I was laid off for two weeks but I am back to work now. I was laid off because we had no customers and that is why we have moved our operations here [to the Yacht Club]. Right now, it’s really hard. There are no tourists,” she told the Samoa Observer.

“We depended on visitors from overseas, which is the case with restaurants like ours. That is where we are at now. We are operating from one location [the Yacht Club] because there are barely any customers. What Sails is doing now is working out of one location, trying to keep as many staff members as we can, employed.”

The cost of keeping Sails open daily without its usual customer base was $25,000 a week, said Memea Lyvia Black, who owns Sails with her husband Seiuli Ian Black. Together, they operate the Yacht Club, which is a two-minute walk from Sails.

Memea told the Samoa Observer that they had to lay off 17 employees from Sails. At the Yacht Club, they have seven people working, including Aserona and the Sails chef Dax Fuiava.

“We really had to make some tough decisions. We tried to maintain our crew but it was costing more for us to maintain and keep it [Sails] open,” she said.

When the measles epidemic hit last year, Sails laid off four staff and things “got worse” when the Covid-19 S.O.E. orders were issued, according to Memea.

“Last week, before the last S.O.E. [amended] orders came out, we really hoping and we thought it was going to start opening up,” she said.

Sails received reservations for private functions scheduled in May and June, but they soon found themselves having to cancel the events.

“When it came out that there was an extension to the S.O.E. orders, we could not see ourselves being effective or feasible to maintain two places…so we decided to temporarily close Sails for now until the S.O.E. opens up trading a bit,” added Memea.

“For the first time, we have got Yacht Club to do lunches...it’s about being feasible, it’s about being effective and efficient, utilising our resources and what not…we’ve got to keep it doable and affordable for our locals surrounding us here at Mulinuu. We have things for ten tala, quick lunches, ten tala pokes and fish n chips and chicken soup.” 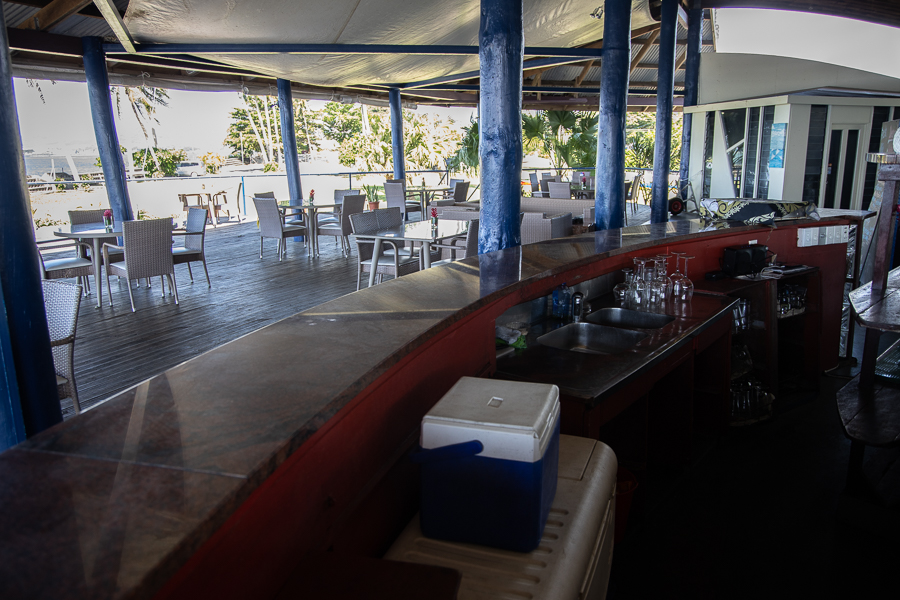 On a normal Thursday, pre-Covid, it was “a good day” at Sails, she notes.

“We have had to hustle a lot more, do deliveries to try and sustain ourselves. Sails on a Thursday is usually a really really good time for us with lunches. But it has been very quiet. We initially had to close for that first four weeks of the S.O.E.,” Memea revealed.

Samoa’s market is saturated when it comes to restaurants so at Sails, they focus on family events and private functions. But they had to cancel those bookings.

“It’s been challenging. We’ve really tried to sustain both places to keep people employed. We’ve had to keep skeleton staff – two from Savai’i who help with security, two cooks, and two front staff and here at Yacht Club it’s been three staff plus myself…a skeleton staff. We used to have four or five up front and a minimum four or five in the kitchen,” she said.

“The next step, I hope they will loosen it up because it’s good to get some trading. It’s so sad for us. Is it necessary? We can keep the borders closed…I want to acknowledge the tremendous work the Government has done in keeping the borders closed and keeping Samoa safe. That was absolutely crucial. So we really must acknowledge how fast they moved.”

She praised Samoa for responding to the pandemic “fast, hard and first,” in comparison to neighbouring nations.

“But I think it’s time to open it up and let the trade begin,” suggested Memea.

“What’s happening now has great, far-reaching effects…I think we could all do with loosening up a bit.”

She said the Government ministries have done a fantastic job to prepare the nation for Covid-19 and gives thanks to God that there is no case of the virus in Samoa.

“But we also want to say how much it has really hurt a lot of people, a lot of businesses…just going out and about we are really feeling it. At this point – what can Government do? What can we do? We are all trying to help each other…everyone has been trying to boost each other  up,” added Memea.

“We all know how tough it is for everybody. It would be good to get things to loosen up a bit.”

Aserona said she looks forward to the day her co-workers can return to their jobs.

“I hope that all goes well and we can bring my co-workers back. I feel bad because I miss my co-workers. We really wanted to keep everyone working. You know, we are Samoan – we are people who love each other – but we cannot keep people at work because the money is not there.”