Fun with Music School gets creative with recital

A Music School in Samoa called "Fun with Music Center" is planning a virtual recital on social media.

The School was founded by Faolo Utumapu and Salainaoloa Tuimavave with their goal to teach students how to play the piano and develop their passion for music.

They had planned a recital for the end of March but due to the coronavirus State of Emergency lockdown, they have had to be creative with their plans. This is when the plan for a virtual recital on social media was born.

"We were planning to do the recital at the end of March but due to the lockdown restrictions, we have to adapt to it and improvise.

"So then we told the students that we will utilize social media for the recital. What we are doing is that they will take a video of them playing the piano and we will post it on our social media page."

Ms. Utumapu said the students themselves initiated the idea.

"Before we came up with that idea, the students had brought it up when they didn't show up for the sessions due to the lockdown so they filmed themselves playing the piano and sent it to us.

"So that's when we had the idea to have the recital on social media and we are starting to post their videos on our Facebook page this week."

She said there are a lot of advantages for online recitals.

"This is also a great chance for the elderly to cheer for their children from home. So they have the option of filming from home or here at the office."

"Our Fun with Music Center started last year with my colleague," Ms. Utumapu said. "It was on the 20th of November when we started a piano school with only three students."

According to Ms. Utumapu more students signed up after their Christmas recital.

"We had a recital during Christmas and people's interest in the music center began to grow. We started with only two pianos, some are mine and some were from donations. So by January, more students started to register for the music center," she said. 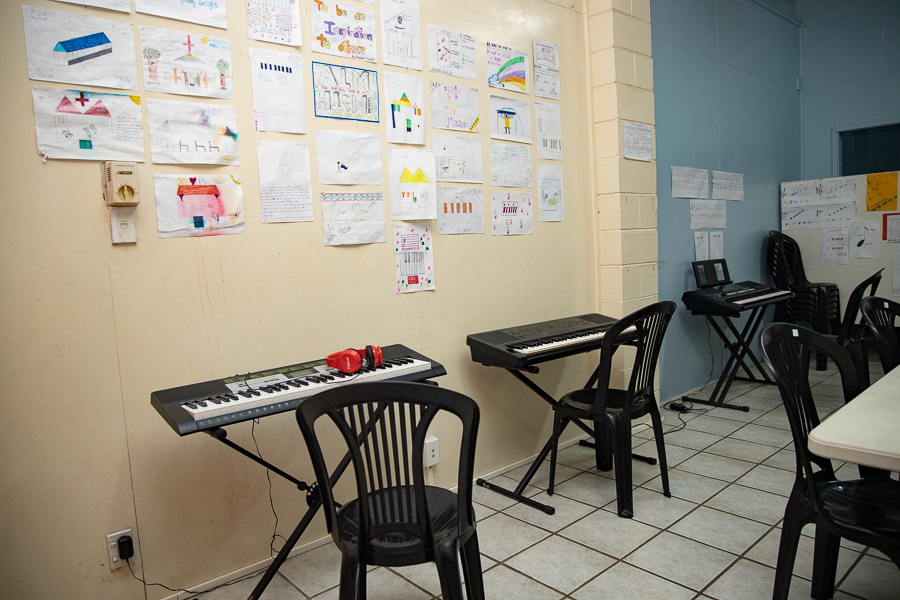 Ms. Utumapu started playing the piano when she was 4 years old and currently plays the piano at church and for the Nuanua o le alofa youth band.

"The majority of the student's goals here at the center are to play the piano for their church," Ms. Utumapu said.

"The first activity we do here is to ask them what expectations they want to achieve after studying at the music center. On the wall, they have all their expectations there and the majority wants to play for church."

Ms. Utumapu started taking up being a piano teacher when she was looking for a music school to teach her son.

"I took up teaching piano because I was looking for someone to teach my son but after a while, there was no music school and then I thought, why not teach him myself.

"To us, a music school is not something to brag about so that's why I always tell the kids if you come here I am not going to show you that I am good at playing the piano, no I am going to guide you and you will develop your own musician skills from that," she said.

"Some sessions we have a mother and daughter and another session with three cousins from the same village. It is more like a family thing. Their sessions are scheduled at different times. The biggest class is about 5 students a session."

Salainaoloa Tuimavave explained that the music center is open to anyone and they have 33 students.

"We started with only 3 students and most of the students had a great passion for music and to some, it's their way of coping with things. We currently have 33 students," said Mrs. Tuimavave.

"The music center is open to anyone and you would be surprised with the students. They range from 5 years old, college students and C.E.O's. Because of the lockdown, the students started to think creatively and started practicing and filming themselves playing the piano from home."

When asked by the Samoa Observer if they planned to expand the music center, Mrs. Utumapu said, "If it happens, it happens."

Tusiga Taofiga, of Lalovaea and Pu'apu'a, is one of the students at Fun with Music Center and told the Samoa Observer that he is grateful that the recital is going to happen.

"I feel really happy now because we now have a chance to show our talents. It is really important to us because people will now see how our practice has paid off," Mr. Taofiga said in an interview with Samoa Observer.

Mr. Taofiga started learning how to play the piano at the music school and stated that the recital will motivate him to further his piano skills.

He also expressed his thanks to the teachers, families, and friends.