“Special circumstances” led to a highly-compensated foreign consultant to the Electric Power Corporation (E.P.C.) appear like he was driving an unregistered car at the time of an accident, the E.P.C.'s chief has said.

In February, Mr. Brillantes’ E.P.C. vehicle was carrying private plates when it was allegedly involved in an incident that resulted in damage to a parked car.

“This vehicle was registered under an E.P.C. license plate; however due to last minute changes that led to an issue at hand," said Tologata. 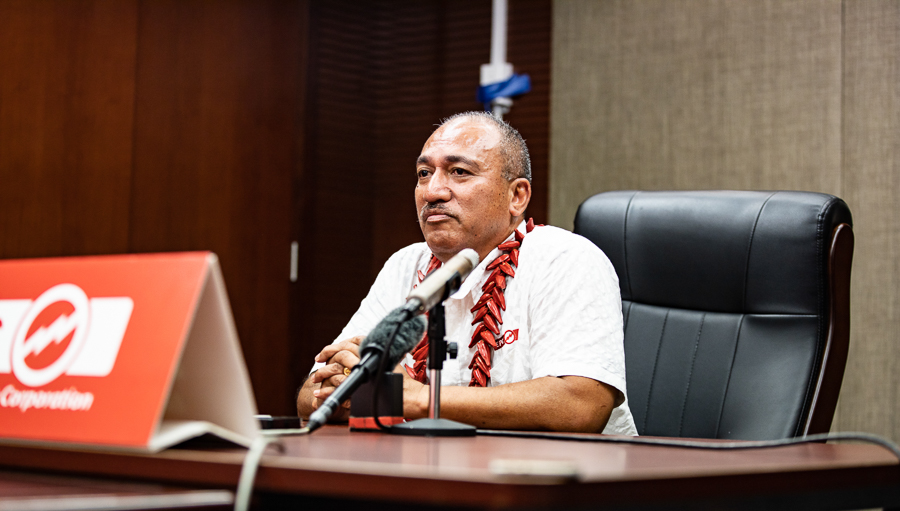 In an earlier interview the Minister of Works Transport and Infrastructure, Papalii Niko Lee Hang, told the Samoa Observer that information from the Land Transport Authority (L.T.A.) suggested the vehicle was on the road “illegally” and it was not registered.

The Samoa Observer sent follow up questions to the L.T.A. Chief Executive Officer, Galumalemana Ta'atialeoitiiti Tutuvanu-Schwalger, asking if the vehicle was registered. No response was received.

Tologata explained they recruited an engineer from Japan to service the Fiaga diesel power station.

“The contract is for two years and during negotiation of his contract this was one term he was adamant about: [….] having a vehicle assigned to him with a private license plate in which he can use freely, instead of an E.P.C. license plate which [would] limit his time on the road,” Tologata said.

“And we had to accommodate his request and made the last minute changes; we then used a private license plate on hand previously used for other E.P.C. projects for the vehicle assigned to the consultant.

“At the same time, a letter was written to the Land Transport Authority on a Friday informing them of the changes; however, the vehicle got into an accident that same weekend before the letter reached the L.T.A.”

Tologata told the Samoa Observer, hiring this Consultant was critical to the E.P.C. and having Mr. Brillantes on board will save millions in maintenance costs for the generator.

He said the $22.7 million generator’s manufacturer (Mitsubishi Heavy Industry) is in charge of the maintenance work. The company has a local agent, Transwork Limited, but due to the costs incurred by engaging Transwork for services, hiring an engineer directly from overseas made more sense.

“We have tried many times to bypass Transwork Limited, but every time, we need servicing and parts, we contact the manufacturer and we always get referred to their local agent,” he said.

“And so we had to recruit our own service engineer to the generators for two years to save money for E.P.C.”

Tolo said the E.P.C. was paying $1.2 million tala for labor in servicing the four generators.

Since the accident involving the Government utility’s vehicle, the engineer now has to use an E.P.C. license plate, the C.E.O. said.

“We have informed him that we have no choice but to use the E.P.C. license plate and if he [does] not agree that he will not get a vehicle.”

Last month Commissioner of Police, Fuiavaili’ili Egon Keil, confirmed the ongoing investigation into the vehicle with the license plate 25159, as it could not be found on the national registration database.

“It’s unclear how this car has a license plate, but we cannot find it on the registration system.”