Empty glass bottles will get a new life in our roads or houses if the glass crushing pilot is a success. (Photo: Francis Faalili)

Samoa’s glass imports could soon be crushed into new life instead of taking up space in landfill thanks to the arrival of a new machine capable of crushing 300 kg of glass in an hour.

The Samoa Recycling Waste Management Association, which purchased the machine with funds from the United States Embassy hopes to turn glass waste into pavement, roads or bricks, potentially saving thousands of dollars.

Vice President of the Association, Silafau John Sio, said glass bottles are one of the major waste streams that come into Samoa but do not have a way out.

“I believe we can substitute sand with this glass, I am pretty sure there are cost savings there,” he said.

The machine is fed manually with glass bottles at the top, and the crushed glass is emptied out the bottom into a tray or bucket. So far, tests have been conducted with labels and stickers left on the bottles but the association may look to remove them in the future.

Marina Keil, Association President said collection will begin this month and when a stockpile large enough is gathered, the crushing and distributing can begin.

“We should be able to turn the machine on in the next few weeks,” she said. 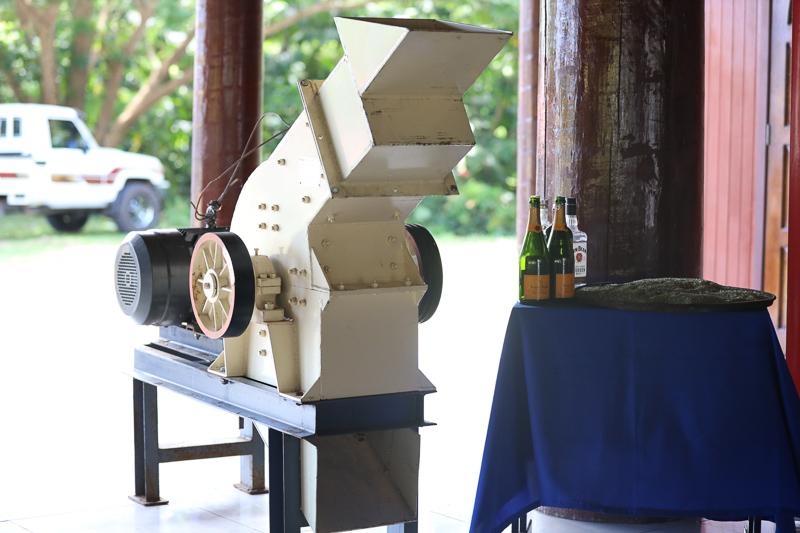 The machine cost roughly T$10,000, and the association is looking to the Government and Japanese Government for further funding assistance to get the collection and end product distribution off the ground.

Throughout the pilot, S.W.R.M.A. will target restaurants, hotels and bars and collect their leftover glass bottles from them, as well as rescue unwanted bottles from the Samoa Beverage Company and Taula Beverages who collect a tonne and a half of rejected product a month.

Ms. Keil for now the glass will be collected in plastic wheelie bins but she is hoping to work with the beverage companies to have crates donated for the purposes of collecting glass more safely.

She is not sure how long the pilot will run for yet.

Silafau said for now there is no funding for incentivising people to keep their glass bottles and divert them to the association to be crushed. But if the Waste Levy is passed, perhaps some of the money from that could go towards buying bottles from consumers at a low but motivating rate.

A waste levy was proposed in April 2019, and a Government led taskforce was established to research, plan and implement it.

Then, the Ministry of Natural Resources and Environment said it hoped the Office of the Attorney General can begin drafting legislation by June. It is not clear whether that work has begun yet.

A waste levy works by charging a levy on importers on their products as they arrive to Samoa, such as aluminium cans, plastic bottles and tyres.

Consumers can then earn some of that money by returning recyclables to recycling collectors, while the rest goes towards the costs of doing business – the prohibitive barrier in Samoa’s waste management system.

Ms Guinto said the levy is a great initiative for Samoa and a proven success in other small island states like Kiribati, where in just seven months, 1.5 million cans were handed in by consumers in exchange for a few cents per can.