Popular Auckland-based reggae band Three Houses Down is in Samoa for the Vailima Samoa Vibes concert.

Amongst the group of musicians is emerging star and 14-year-old singer Lotima Poume’e, who is known by his stage name General Fiyah.

Three Houses Down band leader Charlie Poume’e told Samoa Observer that they were happy to be in Samoa and were looking forward to the concert on Friday night.

“I come to Samoa often and it's great to be back here in beautiful Samoa. This is General Fiyah’s first time here. We go back Sunday so we’ll be here for a few days,” he said.

When asked about his stay in Samoa thus far, Lotima said: “Samoa is beautiful. I am really having a lot of fun here. I am looking forward to the concert tomorrow.”

He said he is keen on returning to Samoa for holidays, and he was unaware that he had a big fan base in Samoa.

“Yes  I do, I really love this place. I didn’t know I had a fan base here, I think it’s pretty cool,” he added.

Lotima has been singing since he was little and joined the Three Houses Down group when he turned 10, while expressing his appreciation for being part of the band.

Band leader Charlie said that it is a good opportunity for Lotima to perform in Samoa as he had once did a gig at the “One Love” concert in New Zealand.

“We have provided a platform for General Fiyah so it would be easier for him because we have built a fan base and done all the hard work. He joined the band when he was 10 and we performed at the biggest festival in New Zealand which is called “One Love” and from then on, well the rest is history,” he said.

“For those of you that are coming out tomorrow to the Samoa Vailima Vibes concert, make sure you guys grab your tickets. It's gonna be a massive show, we got General Fiyah and Three Houses Down from Aotearoa New Zealand here on the shores of Samoa.” 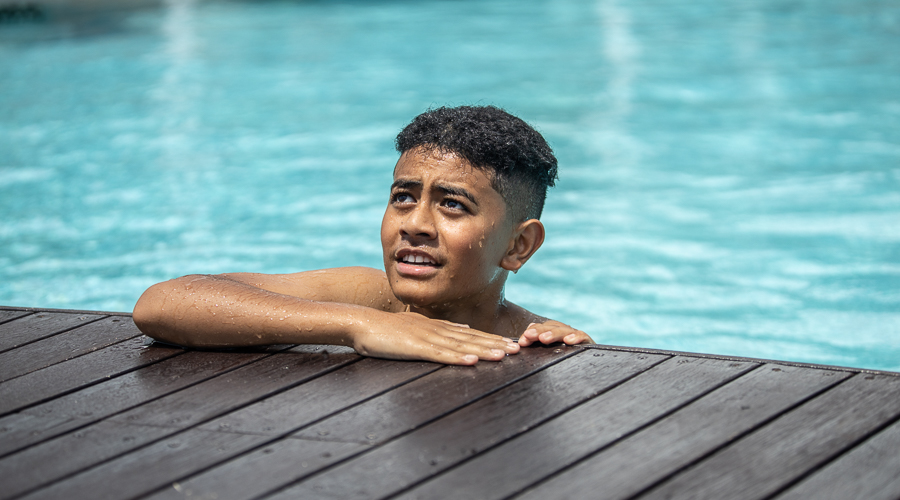 Lotima, who is a big fan of American R&B artist Bruno Mars and the late pop icon Michael Jackson, urged young Samoans to continue to work hard and strive for their dreams.

Work hard and strive for your dreams. Never give up and the rest will come if you work hard. To be honest, I like to get nervous. I don’t like performing when I feel comfortable. It’s a good thing for me. It feels a little bit boring when I perform while I am comfortable so I like the challenge," he added.

Another member of the Three Houses Down band, Tupuola Sione Poume’e, said the group is a mix of Samoans and Tongans,

He said it was great to be in Samoa and he hopes the concertgoers enjoy their performance.

“There are two Samoans in the band and the rest are Tongans. Being in Samoa is an amazing feeling, you don’t know what to expect. We are here with the people of Samoa and hopefully they enjoy what we’ve brought and prepared for them," he said. “For the young people of Samoa, the sky’s the limit. Hopefully what we bring can inspire more people.”

Three Houses Down with General Fiyah will be performing alongside The Runtingz Family with Israel Starr, Lomez Brown, Lion Rezz, Raggadat Cris and Poetik at the Vailima Samoa Vibes concert on Friday March 13.