The quarterfinalists and semifinalists in the men’s and women’s divisions of the Vailima Marist International Sevens  tournament have been found, with most of the heavy hitters making it through.

Day One at ACP Marist Stadium in Lotopa on Friday saw all the top seeds advance, with a few upsets coming later on in the piece.

Hosts Marist slipped into the Cup quarterfinals slightly controversially after an officiating blunder in their second Pool 2 match.

Their 22-12 win over Satalo, which proved crucial in both teams’ push for a quarterfinal berth, was marred by Marist having an extra man on the field for about a minute.

Marist were playing with six men at the time after a yellow card in the second half, when two substitutes came onto the field with only one player coming off.

Marist scored a try during this period, a moment that proved fairly pivotal as they kept Satalo from scoring at the other end as well.

Each team in Pool 2 were thus on one win heading into the final matches; Linwood vs Marist and Apia vs Satalo.

The hosts proved they deserved a quarterfinal berth by beating Linwood 38-14 to finish as runners-up.

Tries to Alofa Luteru, Esau Iulai and former Manu 7s representative Maauga Iamanu shot them out to a 21-0 lead, while Alosio Afa was nailing conversions from all over the park.

Afa himself scored a try next to make the lead 26 heading into halftime. 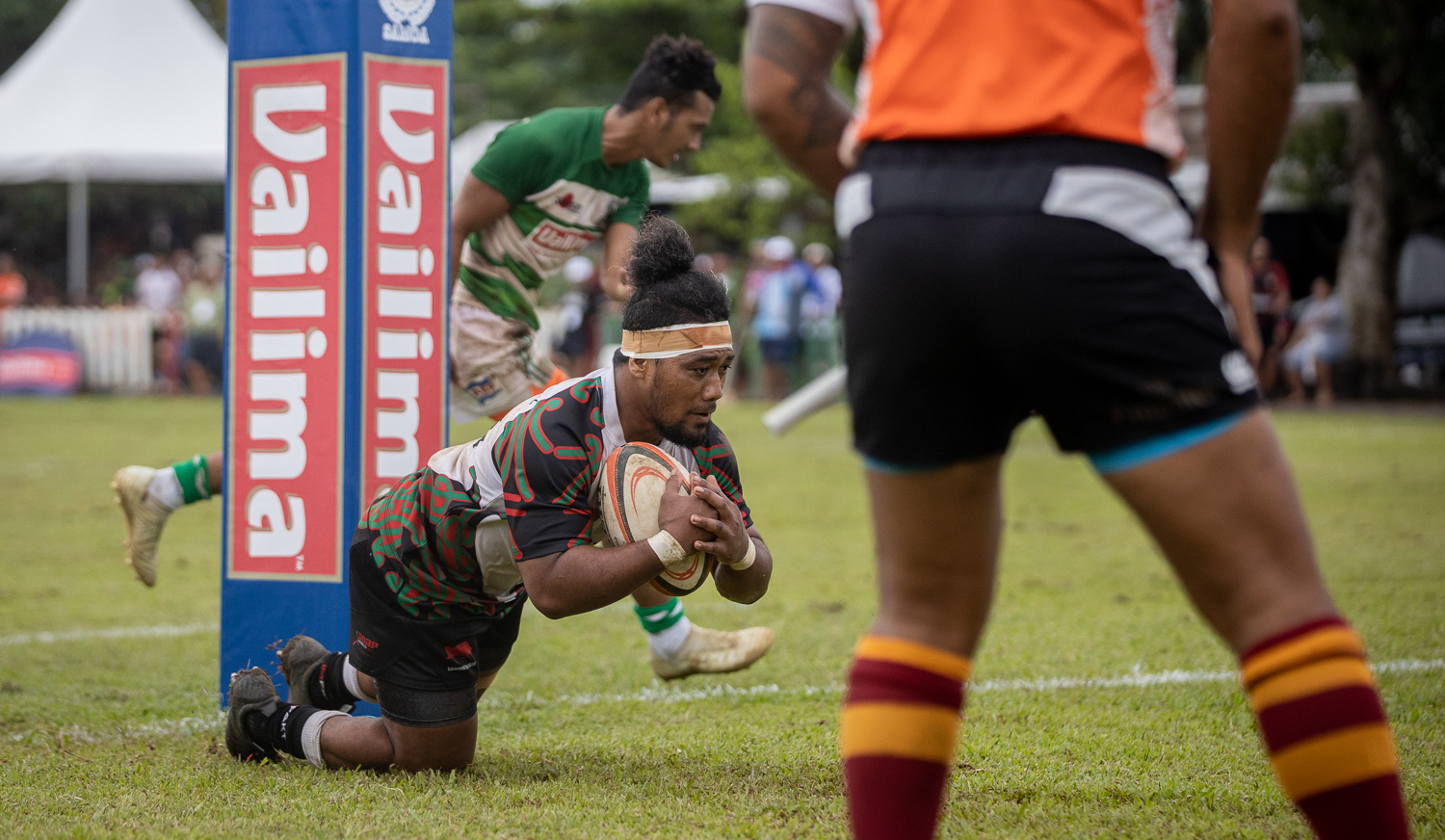 A yellow card opened the door for Linwood after the break, and they mounted a comeback effort with tries to Faalele Iosua and Markus Burton.

Marist were able to weather the storm though, scoring two more tries themselves to seal the win. 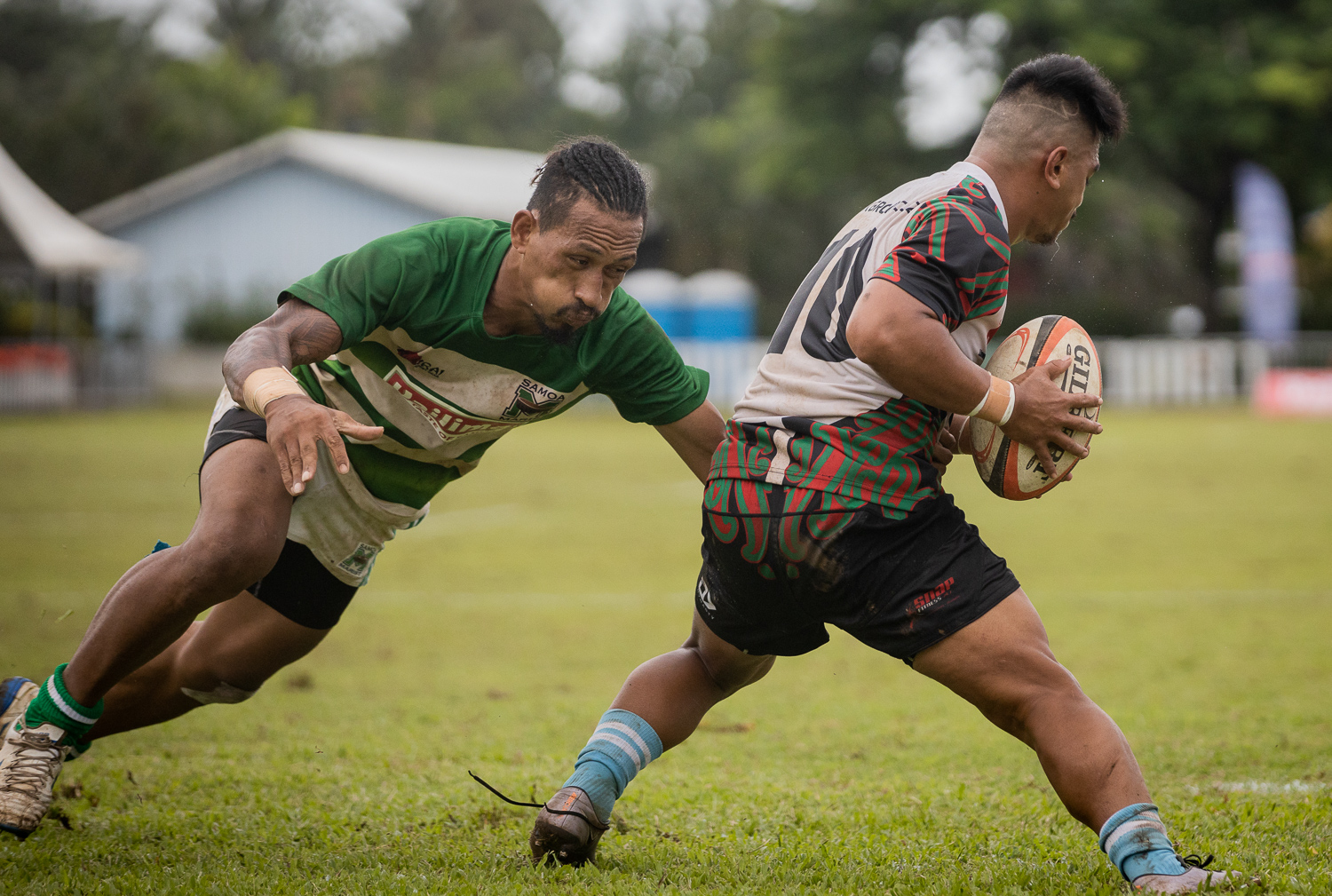 Apia Maroons ended up topping Pool Two thanks to their 15-5 win over Satalo, who finished third.

Satalo hit back just before halftime, but the Maroons were able to keep the majority of possession and territory after the break, scoring again to win 15-5.

In Pool 4, AYI Fiji had to battle in their 12-5 win over Vaimoso, but eventually won their third game to end Day One undefeated.

Vaimoso had all the ball early, but couldn’t convert against the tournament favourites. 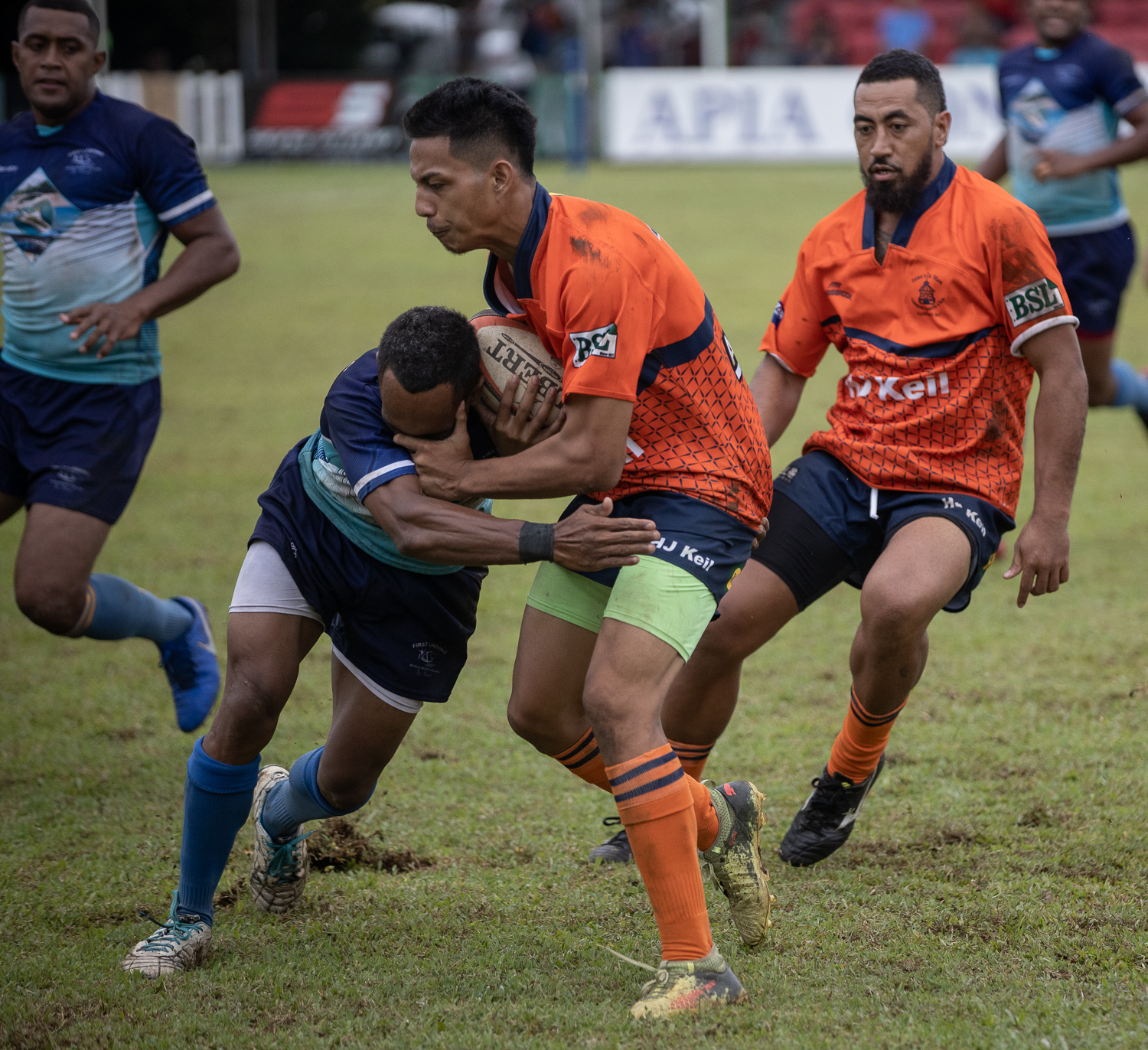 Olympic champion Kitione Taliga almost went through for the visitors, but knocked on in the tackle for Vaimoso to score at the other end.

Keponi Paul broke away for Achieve Your Impossible, and then Manu Laqai scored right on halftime to give the Fijians a 7-5 lead.

Vaimoso were defending tremendously against their star-studded opposition until Glen Cakautini scored to take AYI a try clear. 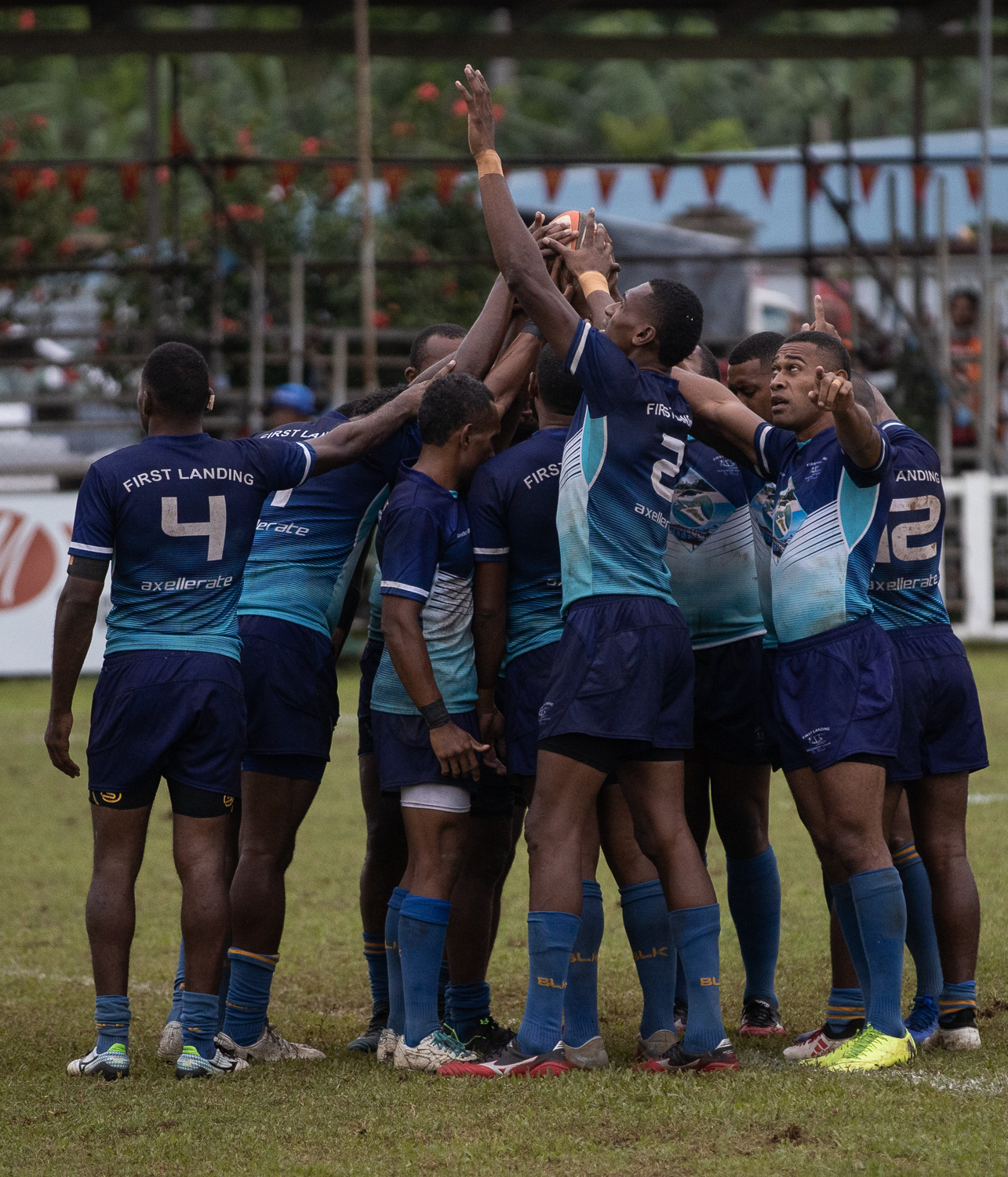 The locals kept hammering away but it was to no avail as the final whistle went, leaving them without a win on Day One.

The other quarterfinal spot in Pool 4 came down to a straight shootout in the very last match of the day between old rivals Vaiala and Moata’a, who both had a win and a loss in their previous matches. 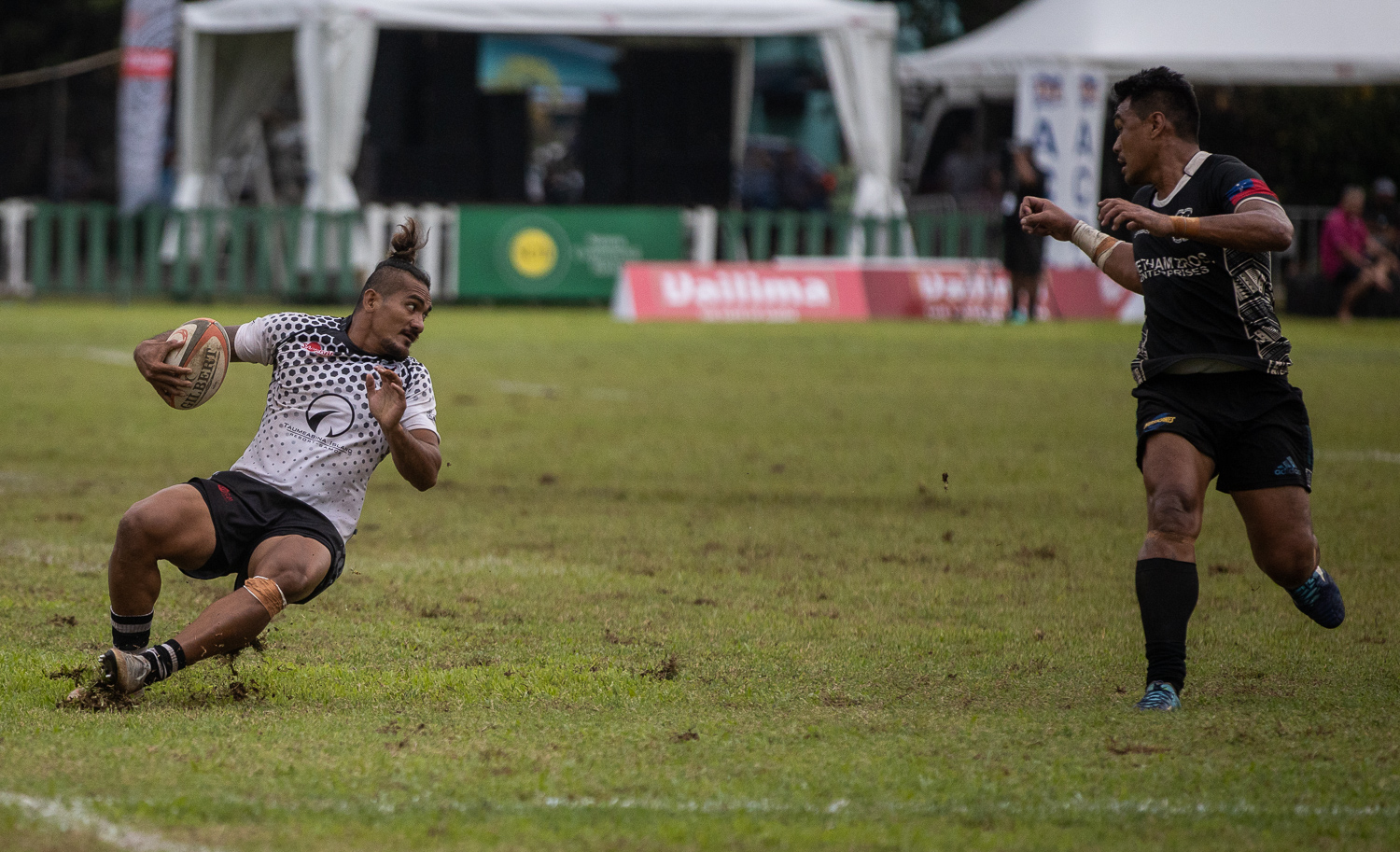 Former Manu 7s representative Johnny Samuelu won the kickoff back for Blackie, putting them on the front foot.

They opened the scoring through Malu Falaniko, who did well to muscle through two defenders and get the ball down.

Moata’a hit back, but it was Vaiala who took a seven point lead into halftime after Patrick Fa’apale found Melani Matavao with a lovely short ball for the Manu Samoa halfback to score. 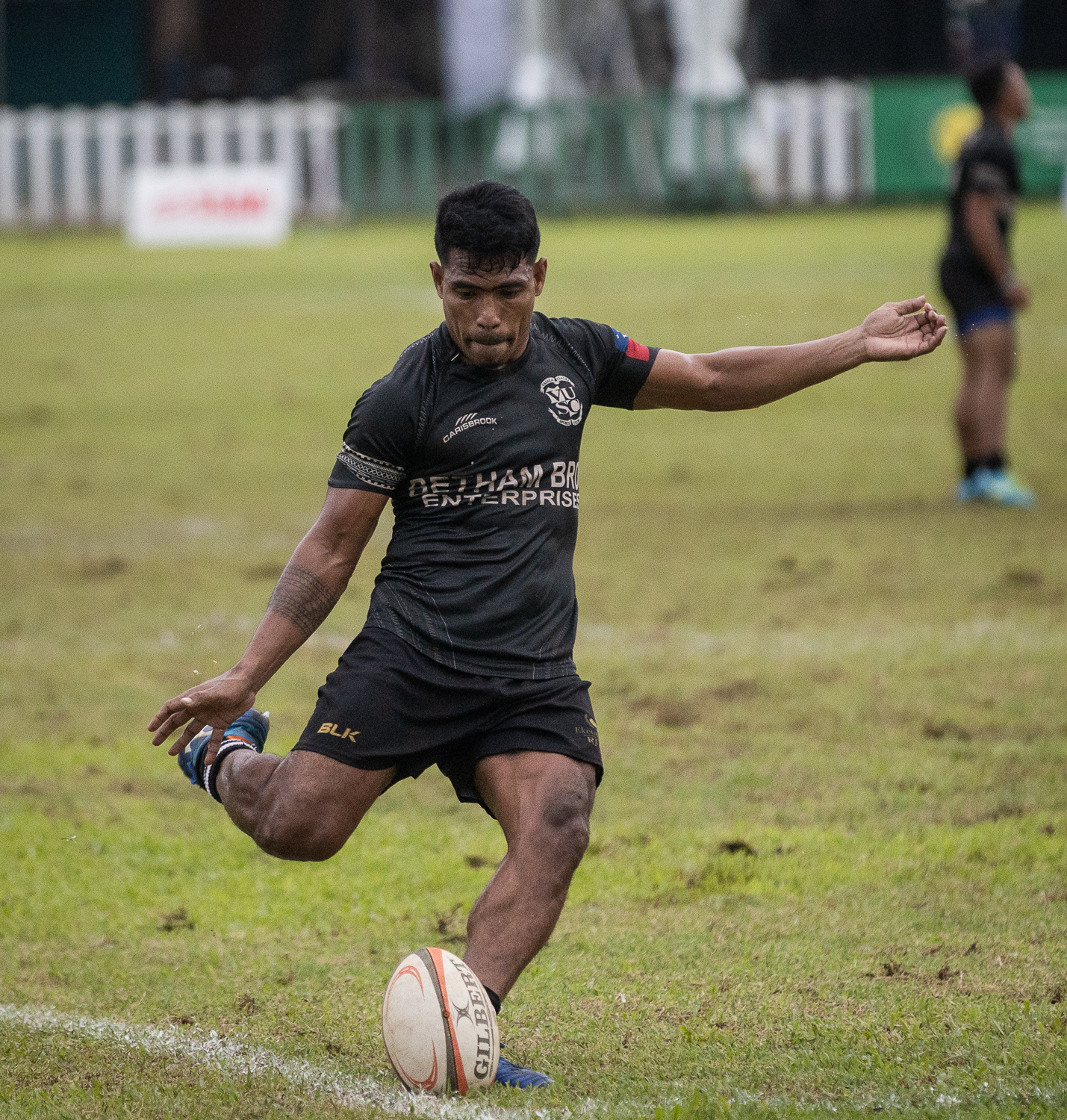 Matavao then turned provider for the next try, linking up with Samuelu to put his former Manu 7s teammate in.

And Simi Taupo sealed a 22-5 win and cup quarterfinal for Vaiala with their fourth try in the corner.

Their opponents on Saturday will be Tama Uli Salelologa, who won all three of their matches to top Pool 1.

Tama Uli weren’t at their best, but got the job done in their final game against Moamoa – a 19-14 win. 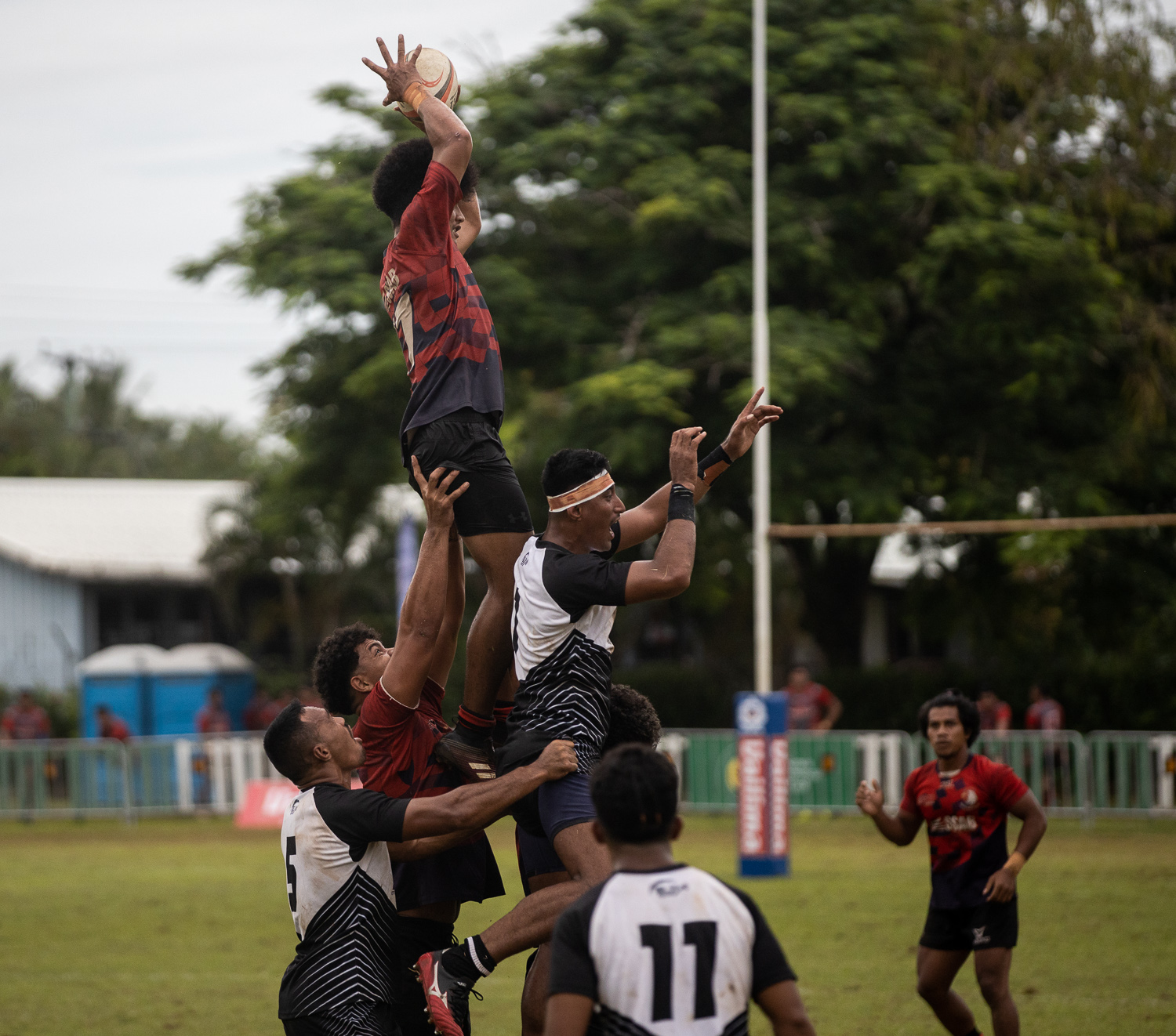 Meleniuma Su’a opened the scoring for the team from Savai’i, but Moamoa, who were hunting the second win and a quarterfinal spot for themselves, soon replied. 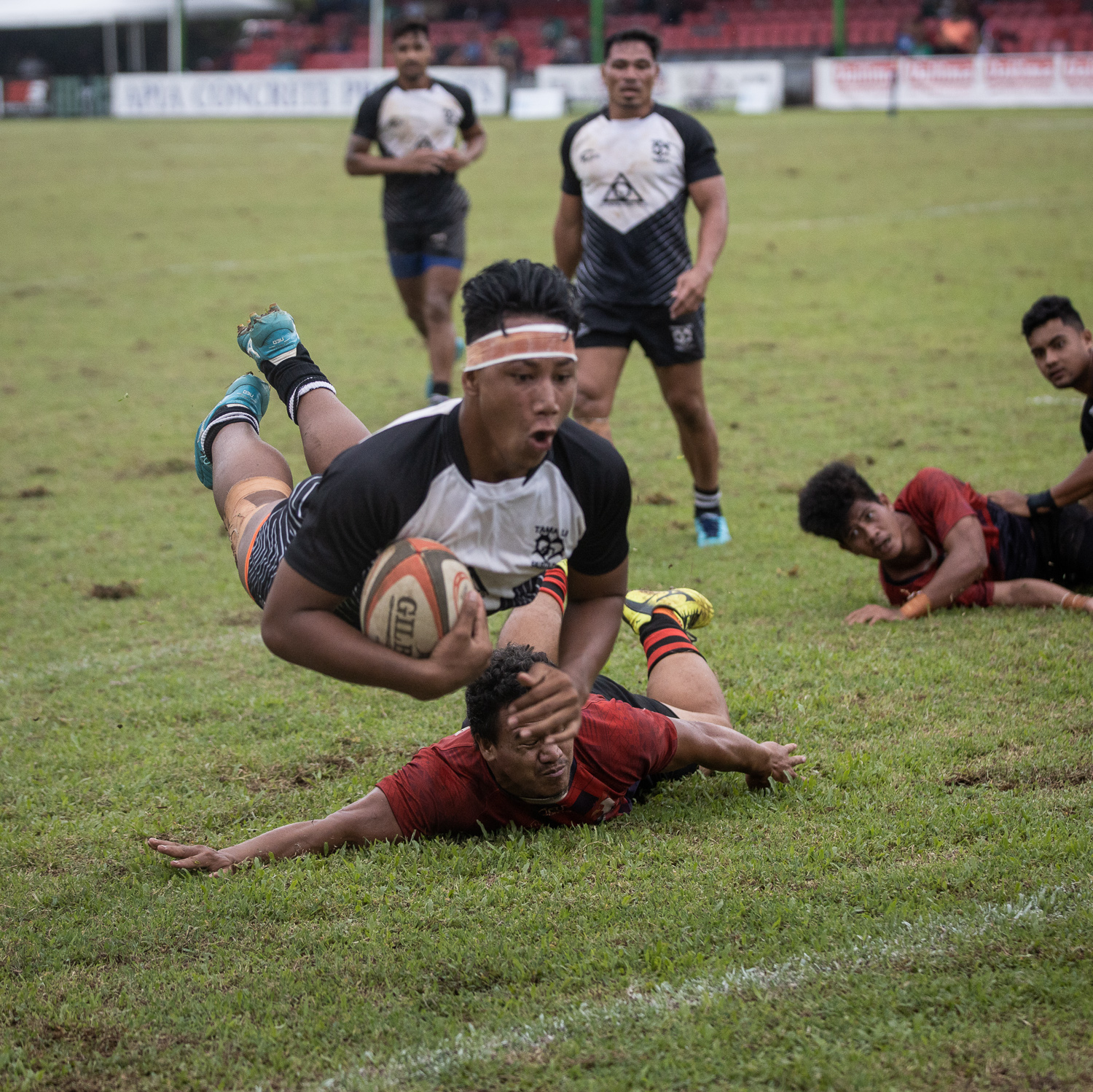 Asovale Leauasoga sold two defenders with dummies on the way to the tryline, and the Roosters tried to up the momentum when Des Sepulona received a yellow card.

After halftime they took the lead, with Theo McFarland sparking a break with a magic offload, before reaching out and slamming the ball down over the line through multiple defenders a phase later.

Salelologa came back though, as Kelvin Masoe tied the game at 14 with seconds remaining.

They won the resulting kickoff as well, allowing Gasologa Pelenato to score the winning try in the corner.

Earlier, Lauli’i Lions had secured second place in the pool thanks to a 32-0 win over Talavalu, their second victory of the day. 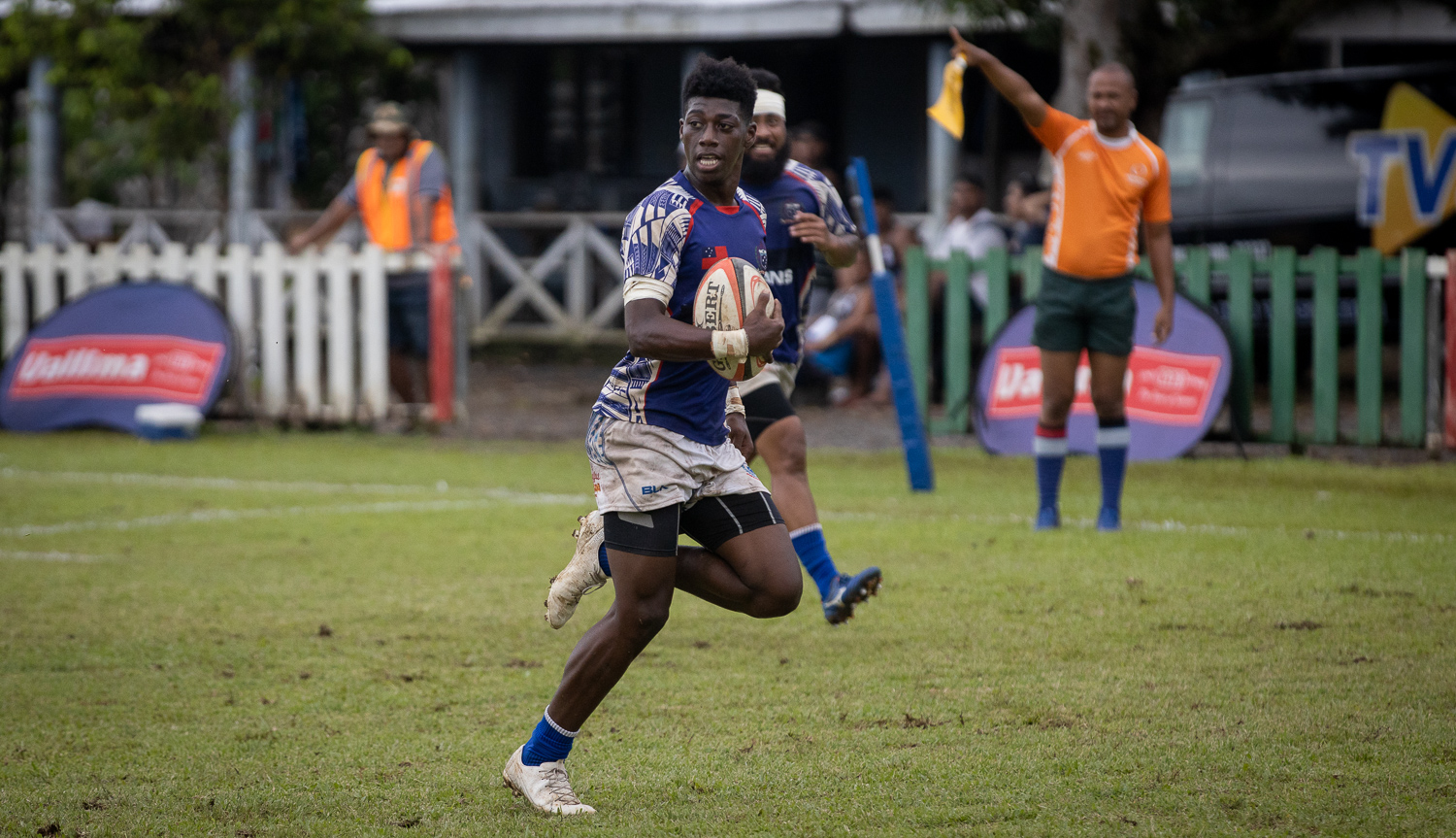 That earned them a Cup quarterfinal matchup with AYI Fiji on Day Two.

Like Pool 2, Pool 3 ended up being decided on head-to-heads after two teams finished on two wins while the others had one each.

Top seeds Tepatasi did go through as champions, but lost their final match 14-15 to Vailele in what might have been the upset of the day.

Lupesiliva’s 31-5 win over SCOPA ensured they also went through to the Cup quarterfinals, where they will face Apia Maroons

Apia Maroons’ 19-0 win over Avele College meant they went through Day One undefeated at the top of Pool 2.

Aana Blues progressed to the Cup semifinals as Pool 2 runners-up after their 15-10 win over Marist Angels.

Aleipata’s 50-5 win over Teine o le Aava has them in Cup semifinals as champions of Pool 1.

They will play Pool 2 runners-up Aana Blues for a shot at the competition final, with every chance of becoming the first ever local team to win the Marist Sevens.

Luisa Gago opened the scores for the Christchurch club, speeding away down the blindside after a scrum near halfway.

She got Linwood’s second as well, with Elesi Leiataua scoring their third on halftime. 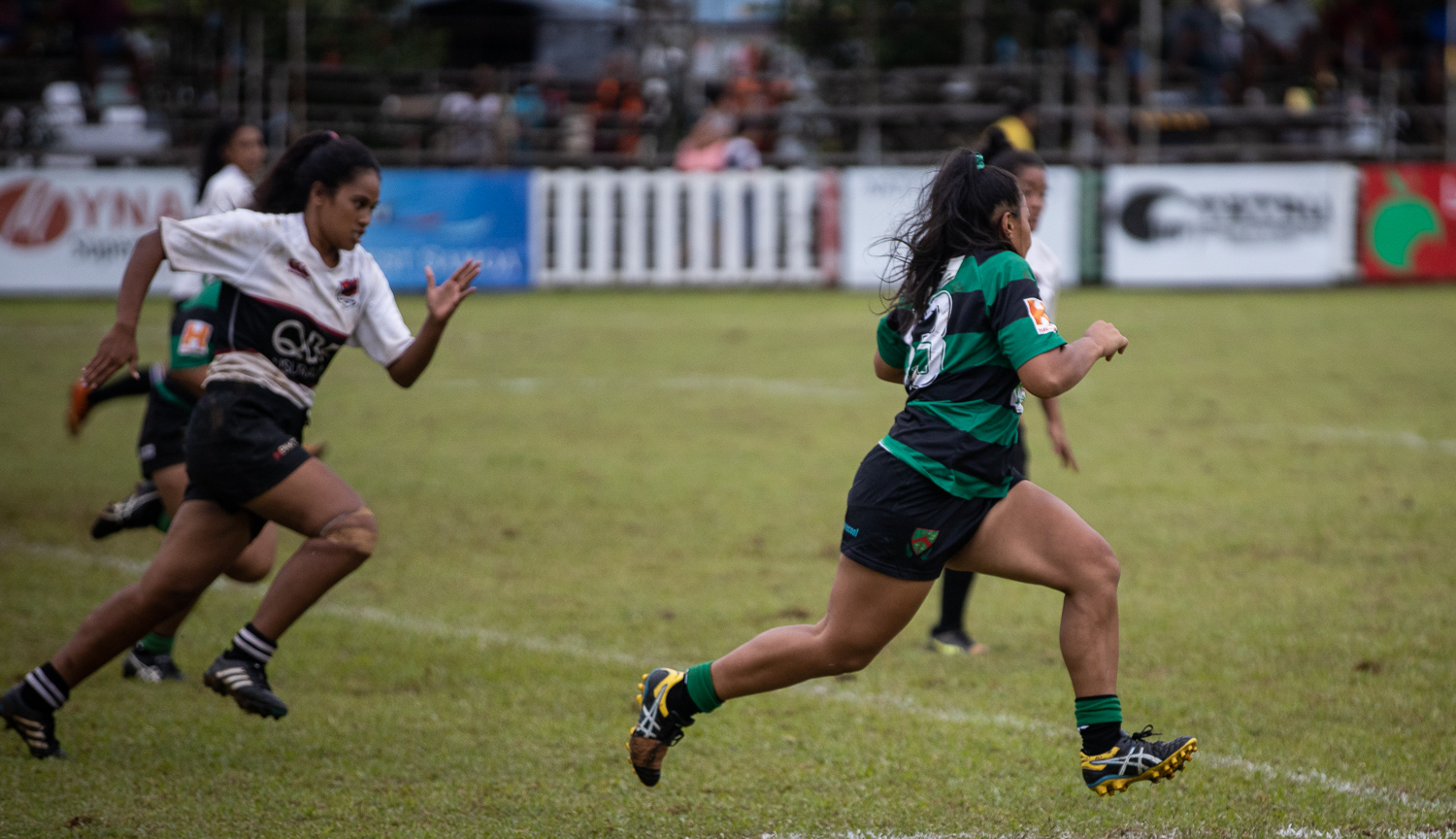 Easter Savelio and Kaitlin Bates both scored in the second half of the big win, which Linwood needed after losing their second match to Aleipata.

Pool Results at a glance 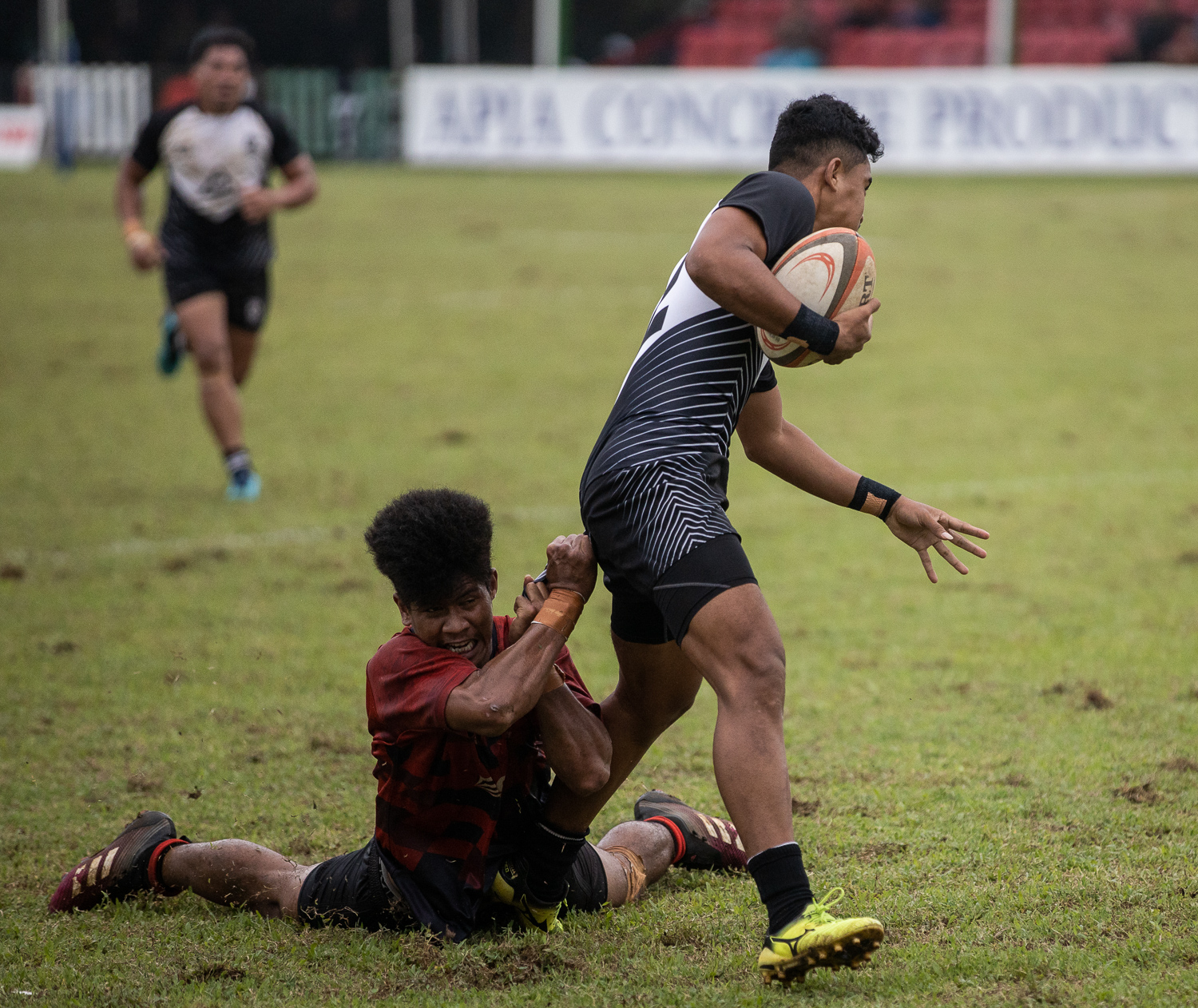