The death of a Chinese doctor Dr Li Wenliang – who warned others about the dangers of coronavirus – has sparked an “online revolt” against the Chinese government.

This is the first time since 1989 for Chinese citizens on the mainland to criticise the central government with commentators calling the ‘next Tiananmen Square’, a reference to the student-led demonstrations in the Tiananmen Square in Beijing in 1989.

Late Dr Li was considered to be one of eight “rumormongers” – who first reported signs of the SARS-like virus (a disease that caused an epidemic in mainland China in 2002-2003) in early December last year – and spoke to his colleagues on a Wechat group of the situation.

Not long after, Dr Li was tracked down by the Wuhan City Police, claiming he was spreading false rumors.

“After I sent the message, the police found me and made me sign an official letter of criticism,” said Dr Li.

The Chinese doctor said he was afraid he would be detained and was worried about the safety of his family. He was then forced to sign an admonition letter, admitting to ‘spreading false statements online’ of untrue remarks of seven SARS diagnosed cases, from the Wuhan Huanan Seafood Market (said to be the origins of coronavirus) and severely disrupting social order. 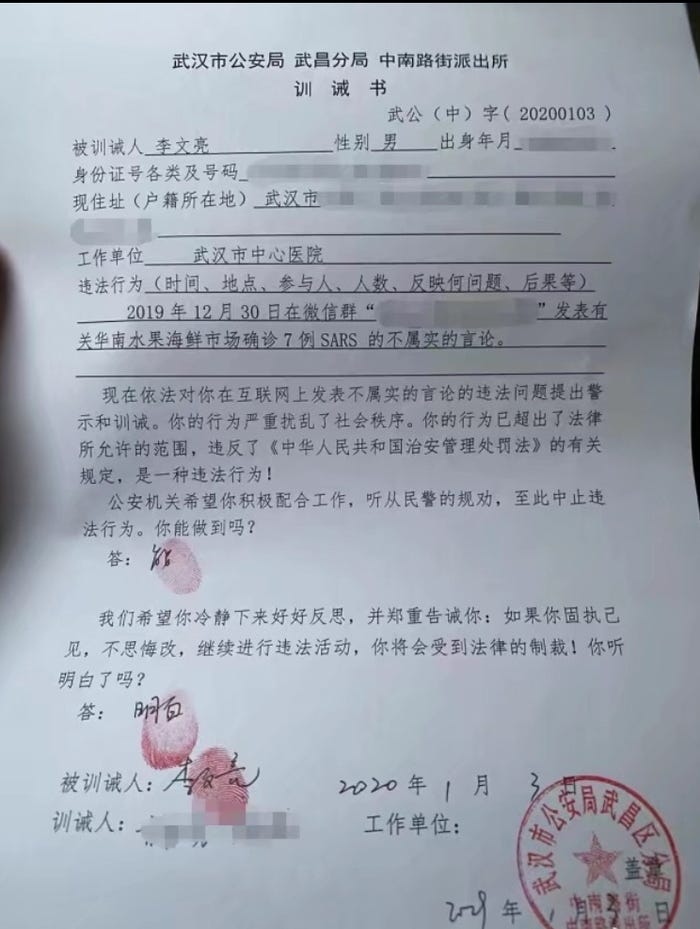 The document that was served on him stated: “Now in accordance with the law, you are warned and admonished about the illegal issue of publishing untrue statements on the internet. Your behavior has seriously disrupted the social order and it has gone beyond the scope allowed by the law, violated the relevant provisions of the law of the People’s Republic of China on public security management and punishment, and is an illegal act.”

The Public Security Bureau, added the document, said it hoped the Chinese doctor will actively cooperate with the work and follow the advice of the Police, so as to stop the act.

The document further stated: “We hope you will calm down and reflect on it, and solemnly tell us: if you persist in your own opinions, do not want to repent, and continue to carry out illegal activities, you will be punished by the law! Do you understand?”

Following the doctor’s death there was grief and anger. The fear that people once had turned into rage and sparked anger in China, with citizens blaming the Chinese government for allegedly trying to cover up the outbreak, and their slow reaction to the disease when it got out of hand.

Chinese citizens have not demanded this much freedom since the Tiananmen Square incident in 1989, where student-led protests resulted in the Chinese military gunning down protestors.

The Chinese Constitution allows its citizens freedom of speech, but the opacity of Chinese media regulations allows authorities to crack down on news stories, by claiming they expose state secrets.

Chinese citizens invoked Article 35 of the Constitution of the People’s Republic of China, to enjoy freedom of speech and took to Weibo (the Chinese version of Twitter) to express their grief, demand free speech and an apology from the Chinese government.

But the authorities deleted their posts moments later.

Sources in China say the people are not allowed to mourn Dr Li Wenliang, allowed to exercise freedom of speech, and forced to be silenced. This led to three hashtags going viral on Weibo following Dr Li’s death but they too disappeared.

A resident in China, who asked to remain anonymous for security reasons, said it is time for China’s central government to hear diverse opinions.

Jonathan DuBos, who has an M.A in Psychology from The Wright Institute of Berkeley California, told the Samoa Observer that the public’s perception of a government coverup in relation to the Chinese doctor’s fate could become the catalyst.

“The cover up about the doctor’s findings could be a big shift in global conversation since the coronavirus is causing global panic and fears that the Chinese government has covered up the early findings,” he said.  “It is now 2020 and it was different from 1989 and 2002 because of the instant spreading of information and it seems that it is not sustainable for the Chinese government to continue tactics of silencing and threatening dissent.”

Government censorship of the internet is done through a number of ways. The Golden Shield Project, which is also known as the Great Firewall of China, is at the center of China’s government surveillance and online censorship. It uses bandwidth throttling, keyword filtering and blocking access to certain sites such as Facebook and YouTube.

The Samoa Observer approached the Chinese Embassy in Samoa for comments on some of the issues highlighted in this article.

A spokesperson for the Embassy said: "The National Supervisory Commission has decided to dispatch an inspection group to Wuhan, capital city of Hubei Province and the epicenter of the novel coronavirus outbreak, to thoroughly investigate issues related to Dr. Li Wenliang.

"The National Health Commission expressed its deep condolences over Li's death and paid great respects to medical personnel who rise to challenges and fight on the frontlines of epidemic control in disregard of great personal risk.

"At this critical moment for epidemic control, the whole society should give more care to medical personnel as well as rally to overcome difficulties and win the battle against the virus outbreak.

"In addition, the Wuhan municipal government on Friday mourned Li's death in a notice. We express our deep condolences and sadness, pay our tribute to him for fighting on the front line against the epidemic, and show our sincere sympathy to his family."

International students in China refused to comment on this situation fearing that they may become a target of the Chinese Communist Party. The coronavirus death toll has risen to over 1,000 with confirmed cases now over 42,638.

Voter advocates hoping to stave off intimidation at polls

Voter advocates hoping to stave off intimidation at polls