Trump acquitted on all charges

President Trump was just the third leader of the country to face impeachment proceedings. (Photo: AP)

President Donald Trump has been acquitted on two articles of impeachment by the U.S. Senate.

The President welcomed the news in a tweet sent shortly after the conclusion of the vote on Wednesday local time.

"I will be making a public statement tomorrow at 12:00pm from the @WhiteHouse to discuss our Country’s VICTORY on the Impeachment Hoax," the President tweeted.

While the President's acquittal on the articles of impeachment was widely expected and numbers against him fell well short of the two-thirds majority required to eject him from office, the Senate vote did not go entirely as planned.

In a shock development Utah Senator and former Republican presidential candidate Mitt Romney broke ranks and voted to convict the President on one count of abuse of power.

President Trump was easily acquitted in the Senate on Wednesday afternoon in a vote that, aside from Senator Romney's, was divided down party lines: 52 to 48. (On the second charge, of obstructing a congressional investigation, Senator Romney did not break with his party).

President Trump's acquittal brings to a close a four-month impeachment proceeding that was just the third of any President in American history.

President Trump was impeached in December last year after a resolution was carried by the United States Congress following an investigation.

"I'm sure to hear abuse from the President," Senator Romney said in a speech to the chamber before the vote.

"I would [not] consent to these consequences other than [for] an inescapable conviction that my oath before God demanded it of me". 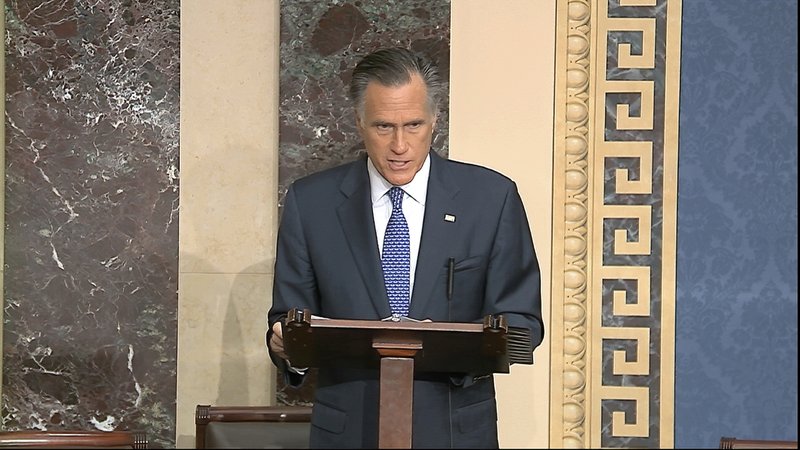 Senator Romney's strident criticism sent shock waves through the previously united Republican party, which had dismissed the impeachment proceedings as an underhanded political plot by Democrats ahead of this year's Presidential election.

Adjudicating on the end of the three-week trial on Wednesday, the Chief Justice of the United States Supreme Court, John Roberts confirmed that the Senate had fallen well short of the numbers required to vote President Trump out of office.

"It is, therefore, ordered and adjudged that the said Donald John Trump be, and he is hereby, acquitted of the charges in said articles,” the Judge said.

But while the acquittal brings a four-month impeachment process to a close, but is unlikely to heal the partisan divisions exposed by the process.

"My vote will likely be in the minority in the Senate," Senator Romney said.

“[But] I will tell my children and their children that I did my duty to the best of my ability, believing that my country expected it of me".

Senator Romney was the party's nominee for the 2012 presidential election, a race he lost soundly to Barack Obama.

Other Republican Senators, such as Maine's Susan Collins and Alaska's Lisa Murkowski, said they believed that while the charges against President Trump had some merit they did not amount to sufficient reason to remove him from office.

Democrats from both houses of Government, while themselves preoccupied with a preselection contest the party's 2020 presidential nominee, vowed to keep up the pressure on President Trump.

"This President is such a menace, so contemptuous of every virtue, so dishonorable, so dishonest, that you must ignore — indeed sacrifice — the truth to maintain his favour," said Chuck Schumer, a Democrat from the state of New York who is also the Senate's Minority Leader.

President Trump was alleged to have told Ukraine's President that he would withhold US$390 million in military aid unless the country's legal system mounted an investigation into the local business dealings of the son of his political rival, the Democratic candidate for President and former Vice President, Joe Biden.

The allegations are thought to be contained in a forthcoming book by President Trump’s former National Security Advisor, John Bolton.

Mr. Bolton was not allowed to testify before the impeachment hearing after the Senate voted to reject hearing his testimony. Democrats have vowed to give him a platform to testify.

Despite a history of rancour between the pair, Senator Romney and President Trump were seen dining together after the latter’s 2016 election victory. News of that meeting stoked speculation that he was seeking the high-profile position of Secretary of State within the Trump administration.

President Trump gave his State of the Union address on Tuesday.