“Usually when we talk about mental health and wellbeing, there are lots of misconceptions around that, stigma attached to it,” Dr. Tiatia-Seath said. (Photo: Twitter)

A leading voice in the community and public health spaces is keen to engage with youth at the EI8HT Sports Pacific Youth Health Expo this Saturday.

Dr. Jemaima Tiatia-Seath is the co-head of Auckland University’s School of Māori Studies and Pacific Studies, and she will be leading a segment about addictions, mental health, wellbeing, Pacific suicide prevention and postvention at the Expo.

“Usually when we talk about mental health and wellbeing, there are lots of misconceptions around that, stigma attached to it,” Dr. Tiatia-Seath said.

The University Lecturer wants to highlight that having mental health conversations is okay, and how best to do so for Pacific people.

She is also keen to promote Pacific approaches to mental health which are just as valid as mainstream methods and should work alongside them. 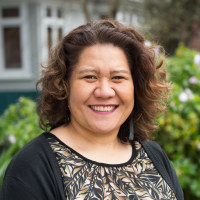 “There are ways that we’ve known for generations that can work, but we don’t seem to hear those narratives,” Dr. Tiatia-Seath said.

“The majority of the help services that are out there are not equipped to deal with a Pacific person; they’re based on mainstream models and frameworks, and then people are meant to fit within the framework.”

She said that leads to a gap between knowledge that mental health services are available, and people taking steps to seek help from those services.

“The uptake is also a lot lower because of the attitudes and stigma and values around people seeking help – it’s seen as a bad thing or a weakness,” Dr. Tiatia-Seath said.

According to New Zealand’s Mental Health Survey from 2006, Pacific people over 18 that move to New Zealand are in a better place mentally, than those born and raised in New Zealand.

“It’s about connectedness…, the more you’re connected to your language, identity, culture, the better your wellbeing and health status is,” Dr. Tiatia-Seath said.

“They’re grappling with a whole lot of different identities, and having to have their foot in multiple camps, so you can imagine how that would impact someone’s anxiety, depression, which the Pacific have the highest rates of in New Zealand.”

As a third-generation Samoan-New Zealander herself, Dr. Tiatia-Seath has first-hand experience of such a journey, and published her Masters thesis Caught Between Cultures as a book in 1998.

She said while that sort of cultural identity crisis still exists, the environment is evolving:

“We are seeing a shift, because we’re having the census indicate that a lot more Pacific people are identifying with more than one ethnicity,” Dr. Tiatia-Seath said.

“There’s a multi-ethnic component that I think we need to be more aware of, it’s not just New Zealand-borns anymore.

“I think it’s great to see the [New Zealand] Government commit to the revitalisation of the languages, investing in that and the Ministry of Pacific Peoples. It’s demonstrating a real commitment to overall wellbeing, I believe.”

The EI8HT Sports Pacific Youth Health Expo begins at 10 am at 97 Galway Street in Onehunga, Auckland.

Dr. Jemaima Tiatia-Seath is scheduled to speak at 1pm before joining a wider panel discussion session.